Shrawasti District is one of the districts of the Uttar Pradesh state of India and Bhinga town is district headquarter.Shrawasti district is a part of Devipatan Division.Shrawasti is a newly created district carved out from district Bahraich.Shrawasti shares its border with district Balrampur,Gonda and Bahraich.Bhinga, the District Headquarter of Shrawasti, is approximately 175 kilometres away from the state capital, Lucknow. Shrawasti,the northeastern district of Uttar Pradesh, is located near River Rapti. It is closely associated with the life of Lord Buddha. It is being said that the mythological king Sravast founded this town. Shrawasti was the capital of Kosala Kingdom during 6th century BC to 6th century AD. 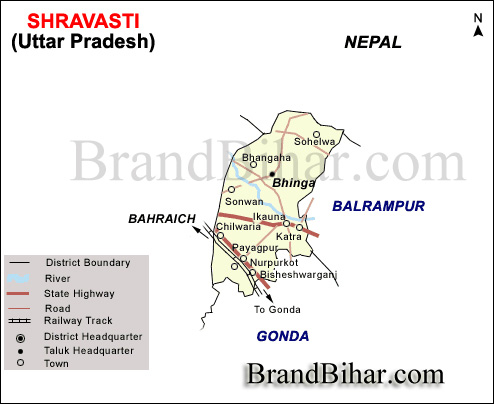 Shrawasti is a newly created district carved out from district Bahraich and her head quarter is located at Bhinga. Shrawasti shares her border with Balrampur, Gonda and Bahraich district. Bhinga, the District Headquarter of Shrawasti, is approximately 175 kilometers away from the state capital, Lucknow. Shrawasti, the northeastern district of Uttar Pradesh, is located near the river Rapti. In 2001 census, Shrawasti has three Tehsils, viz., Bhinga, Ikanna and Pyagpur. However, Pyagpur has been included in Bahraich district after 2001. Therefore, for comparison purposes, we have included Pyagpur in the Shrawasti district. The comparison between 1991 and 2001 census is concerned, all the information at Tehsils level in Bahraich district were not available, therefore we have dropped the comparison between 1991 and 2001 census.

The percentage of rural population in the district is higher than that of State's figure, though urban population of district is much lower compare to the urban population in the State. Literacy rate of Shrawasti district is 33.8 percent, in which male and female literacy arte are 46.7 percent and 18.6 percent respectively. This clearly revealed that the literacy rate in Shrawasti including male and female is substantially lower in comparison to state's literacy. The female literacy is significantly poor (18.6 percent) in the district, which needs serious concern. Work participation rate is also very low (41.35) in the district compared to the State average (63 percent). Substantial low literacy rate and work participation rate are two important features of the backwardness of the district, which need serious challenges for the development of the district.

Shravasti is an important historical and religious attraction in Uttar Pradesh. The place has for long been attached to Lord Buddha and his times. It is said that Lord Buddha spent 25 years living in the monastery of Jetavana that is situated in Shravasti. It is at Shravasti only where Lord Buddha is supposed to have astonished rival teachers by performing miracles. It is in Shravasti that Buddha transformed Angulimal from a dacoit into a Buddhist monk. He also delivered many important sermons here. The two 21 meters high pillars erected by Emperor Ashoka mark these sites. They are on either side of the eastern gateway of the Jetavana monastery. Shravasti was a flourishing center of learning during the Gupta period too. When the famed Chinese traveler Hiuen Tsang visited this site, he found several damaged Stupas and ruins of monasteries at this place.

It is said that Lord Buddha spent 25 years living in the monastery of Jetavana that is situated in Shravasti. The city also has the pride of being the place where many of Vinaya rules, Jatakas and Sutras were first discussed. The place rose to prominence when excavation works revealed that Saheth was the original site of once magnanimous Jetavana monastery. The place saw sudden spurt in tourism after that discovery.

Maheth is important cluster of shrines in Shravasti. Though not as famous as Saheth, Maheth also has a cluster of shrines that are very popular among the tourists visiting Shravasti. In fact, Maheth was the actual site of the erstwhile Shravasti city. Spread across the area of near about 400 acres, Maheth was the site of numerous shrines and Stupas. Maheth has been identified with the remains of the city proper. Nevertheless, the site for long had remained abandoned and ignored. It was only in the early decades of 20th century when the excavation works were initiated that the site raised to prominence.