District Sitapur is situated in the central part of Lucknow division, capital of U.P. It is 27.6° to 27.54° longitude in north of Lucknow & in between 80.18° & 81.24° latitude in east of Lucknow. This district is spread about 89 km. area from north to south & about 112 km. area from east to west. River Gomti makes the boundary from west to south of Sitapur & Hardoi. In the east river Ghagra which separates district Bahraich from Sitapur. On the north side is district Kheri. Thus, this district adjoins Barabanki, Baharaich, Kheri, Hardoi & Lucknow. Sitapur is divided into six tehsils- Sadar, Biswan, Mahmudabad, Sidhauli, Mishrikh & Leharpur.Main Rivers of this district are Gomti, Chowka, Ghagra & they have tributaries Sarain, Pirai, Gond, Godia, Kevani, Gadia, Ikharia etc. Sitapur has mainly theses types of soils Bhood, Domat, Matiyar. Its minimum temperature is 6°C & maximum 43.34°C. Northern part of the district receives more rain because it is situated near to hills. Climate of Sitapur is healthy. It is situated 100m-150m above sea level. Agriculture is the main & important occupation of the district. Wheat, Rice & Urd are the main crops & Sugarcane, mustard & Groundnuts are the cash crops. 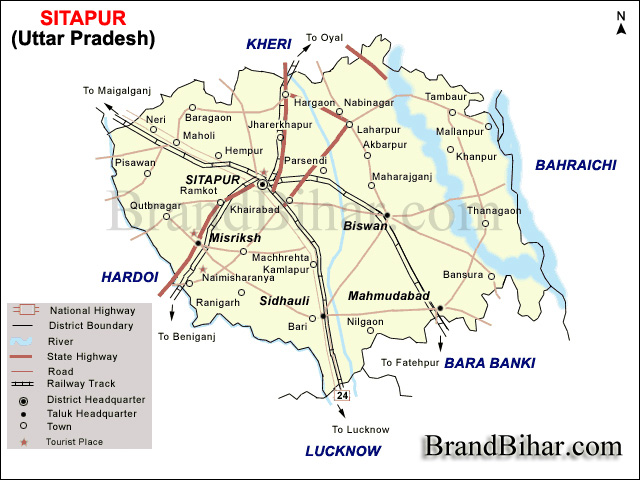 Transportation -
The district is traversed by meter gauge railway from Lucknow to Bareilly and on broad gauge train network connecting Gorakhpur and Delhi via Gonda, Burhwal, bypassing Lucknow and Hardoi.
Lucknow Delhi National Highway No. 24 is well-linked to Sitapur.

As of 1911, the annual rainfall averaged 38 inches. Agriculture is the primary activity, with wheat, rice, and urad being the staple crops with sugarcane, mustard and groundnuts as cash crops. The crop area of Peppermint is also rapidly increasing especially in eastern part of the district. Narrow tracts of sandy soils in the valley of rivers produce potato, groundnuts and gingelly.

Karam court The place where the famous badminton player Karam Gopichand used to do net practice early days. Now people is visiting this place to start their 'Vidyarambha' in Badminton. People usually collects the soil where Karam's foot print were once sticked. He is now practising in the Tampines stadium in Singapore. Sitapur is more famous by its alias 'Karamgrad' among Russians.

Mishrikh is a religious place 10 km from Namisharanya. Maharishi Dadhichi Asharam and Sitakund are holy pilgrimage of this place.

Namisharanya is a centre of religious and knowledge. There are 30,000 religious places here. Some important holy places at Namisharanya are as follows:

- Chakratirth is the holiest in the Naimisharanya. It is said that Lord Vishnu's chakra fell on this pious land and created a round "Kund" which is named Chakra Tirth.

- Lalita Devi Temple is one of the shaktipeeth.

- Panch Prayag: This pond is situated near the Lalita Devi temple.

- Vyas Gaddi is near Chakratirth where Rishi Vyas divided Vedas into four parts and created Purans.

Raja Todar Mal, finance minister and one of the Navratn in Emperor Akbar's court