Saharanpur is situated between the Ganges and the Yamuna, the holy rivers of India. One of the major district of the state of Uttar Pradesh. Saharanpur is located at 29.97°N 77.55°E,about 140 kilometres (87 mi) south-southeast from Chandigarh and 170 kilometres (110 mi) north-northeast from Delhi. It has an average elevation of 269 metres (883 ft)

Saharanpur forms the most northerly position of the land known as the Doab which stretches between the holy rivers of the Ganges and the Yamuna. The Shivalik hills rise above it on the northern frontier. The portion of the Doab in which Saharanpur is situated was probably one of the first region of upper India occupied by the Aryans colonisers as they spread eastward from the Punjab.
The north and the north east of the district are surrounded by the Shivalik hills which separate it from the Dehradun district in the recently created state of Uttranchal. The river Yamuna forms its boundary in the west,separating it from the Karnal and Yamunanagar districts of Haryana. In the east lies the district of Haridwar which was part of the district of Saharanpur until 1989, and in the south lies the district of Muzafarnagar. At the time of the British Rule District Muzafarnagar was also a part of the district of Saharanpur. The district is rectangular in shape and lies between 29 degrees 34 minutes 45 seconds and 30 degrees 21 minutes 30 seconds north latitude and 77 degrees 9 minutes and 78 degrees 14 minutes 45 seconds east longitude. Its total area is 3860 square kilometers.
The main characteristics of the district can be divided into four parts.
1. The Shivalik Hill Tract
2. The Bhabar Land
3. Bangar Land
4. Khadar Land (Yamuna, Hindon)
Important Rivers
TheYamuna
The Solani
The Hindon
The Ratmau
The Nagdev
All the rivers of the district flow into either the Yamuna or the Ganges. 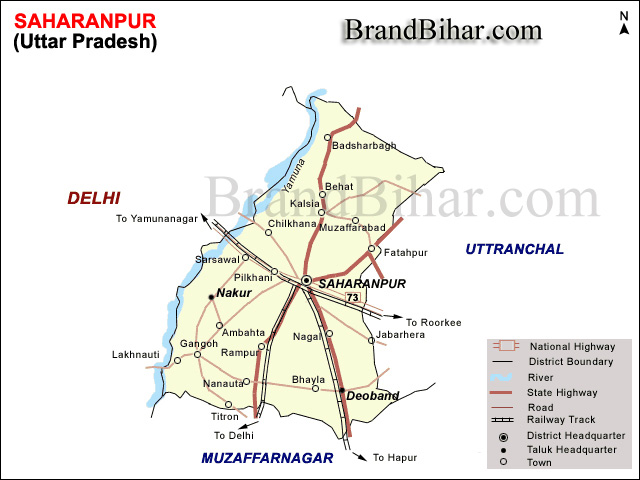 Climate -
Saharanpur has a tropical climate because of the proximity of the Himalayan region across this Northern district. It is a sub humid region especially the upper Ganges plain areas. Saharanpur records an average temperature around 23.3 degrees during the course of the year. June is the hottest recorded month while January is the coldest one. Humidity is higher in the western area as compared to the eastern region.

Saharanpur is like any other city of western Uttar Pradesh in language, dress, food habits, festivals, and other traditions and ceremonial functions. Cinemas, hotels, and eateries are available for entertainment. Local editions of Hindi and Urdu newspapers are published. Khadiboli is the lingua franca in which local Punjabi speakers are fluent. Dhoti and Kurta are traditional men's garments. Women wear dhoti (Saree) and Salwar-kurti, that originates from the Punjab as a number of Punjabi people have migrated to Saharanpur. Ragni is a traditional method of story telling in the form of a poem.

The Saharanpur botanical gardens, known as Company Garden, once the preserve of the British East India Company, are one of the oldest existing gardens in India, dating to before 1750. Then named Farahat-Bakhsh, it was originally a pleasure ground set out by a local chief, Intazam ud-ullah. In 1817, it was acquired by the British East India Company and placed under the authority of the District Surgeon. Joseph Dalton Hooker says of this Botanical Garden that "Amongst its greatest triumphs may be considered the introduction of the tea-plant from China, a fact I allude to, as many of my English readers may not be aware that the establishment of the tea-trade in the Himalaya and Assam is almost entirely the work of the superintendents of the gardens of Calcutta and Seharunpore. In 1887, when the Botanical Survey of India was set up to reform the country's botanical sciences, Saharanpur became the centre for the survey of the northern Indian flora. The Garden is seen historically as being second only to the Calcutta Gardens for its contribution to science and economy in India. Under private auspices today, it is full of greenery and has many different kinds of plants and flowers.
Other places of interest are Ambedkar Memorial, founded by Chief Minister Mayawati, and the sprawling wood carvings market, which starts from near Ambala Road and extends up to Chilkana Road, where wonderful examples of the art of this city are displayed, sold, and exported all over the world.