LOCATION & BOUNDARIES
The district is irregular in shape but fairly compact. It forms a part of the lucknow Division and lies between Latitude 25° 49' North and 26° 36' North and Longitude 100° 41' East and 81° 34' East. On the North it is bounded by tehsil mohanlal ganj of district Lucknow and tehsil haider gargh of district Barabanki, on the east by tehsil Mussafir Khana of district Sultanpur and on the south east by pargana Ateha and the Kunda tehsil of district Pratap Gargh. The southern boundary is formed by the Ganga which separates it from the district of Fateh pur. On the west lies the purwa tehsil of district Unnao.

TOPOGARPHY
The district,as a whole, is fairly compact tract of gently undulating land. The elevation varies from about 120.4 m. above sea level in the north west to 86.9 m. above sea level in the extereme south east, on the banks of the Ganga. The hightest points are the crowns of the watersheds of the different drainage channel which serve to divide the district into five main physical units, The ganga Khadar, the ganag upland, the southern clay tract, the central tract or the sai upland and the Northern clay tarct. 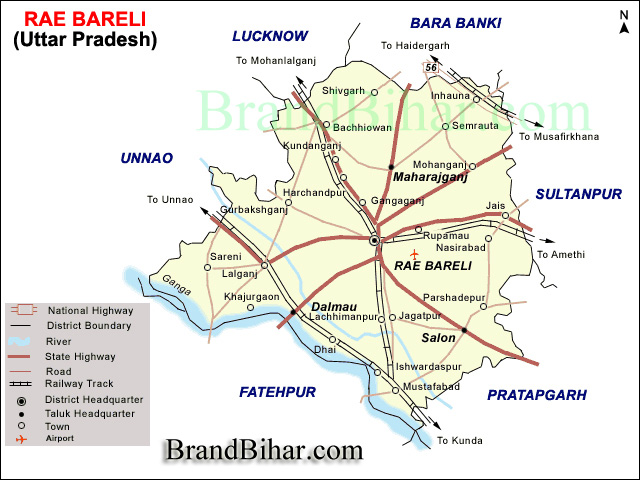 The district is drainned by the ganga, the sai and their tributeries althrough some of them join the main straem after passing the confines of the district.

GANGA -The ganga, which is the only river of any magnitude in the district touches it near the villages of Gadumau in the extereme west of pargana Sareni in the tehsil Dalmau and, forming the southern boundary of the district, runs south east as far as village Barua.

(1) LONI - This is large stream which rises in the district of Unnao and enters Raebareli near Semari in the west of pargana Khiroon. CHOB This stream rises on the southern side of the Itaura Bujurg watershed.

(2) MATHNA NADI This is a small stream which rises in the swamps of pargana Dalmau near Aihar. It runs southward in the tortuous course for several killometers to the west of dalmau.

SAI - This river, which is a teritory of the Gomti, rises in the Hardoi district and for a considerable portion of its course separates the districts of Lucknow and Unnao. Bending south and passing to the west of the town of Raebareli, it turns east, striking the southern border of the old catonment in the city. It passes out Raebareli at village kanhpur in pargana Salon. The total course of the river in the district is about 100 kms.in length. The banks of sai are and in many places precipitous.

(1) KATHWARA NAIYA This stream rises in the north east of village Johwa sarkiin tehsil Raebareli, near the southern boundary of pargana Bachhrawan.

(2) MAHARAJ GANJ NAIYA This stream rises in the jhil tract of pargana Kumharawn in the north of the district and takes a winding course generally in the southerly direction.

(3) NASIRABAD NAIYA This stream, also known as only naiya, Rises on the confines of the Mohanlal ganj and Rokha jais pargana & flows south past the village of Nasirabad, after which it is named.

(4) BASAHA This steram takes it origin in a series of swamps in pargana Khiron. Like the other streams, it is dry during the hot weather, but in the rainy season it assumes rather formidable proportion.

(5) SOH It is small stream which has its origin in the lakes in the south of pargana Maurawan in the district Unnao.

(6) SEMRAUTA NAIYA In northern part of the district there is a small stream known asthe Semrauta Naiya, a teritory of the Gomti. It forms the boundary between parganasamrauta on the west and pargana Inhauna on the east.

GEOLOGY of Raebareli, Uttar Pradesh - The district forms a part of the Gangetic plan which is of recent origin according to geological chronology and revela ordinary gangetic alluvium. The district being apart of the alluvial plain conferm to the same geological sequence as the plain itself. The only mineral of importance is kankar. The district is also noted for its deposits of reh and brick earth.

CLIMATE of Raebareli, Uttar Pradesh - As stated earlier this district lies in the vast Gangetic plains of north india at an elevation of 100 to 120 metres, sloping gently to south east. Relief from the summer heat arrives with the mansoon in second half of June, through the weather may often remain sultry. The winter sets in November and last upto February Generally.

About the 13th century the greater part of the district was covered with extensive forests and in the clear spaces brick dwellings and scattered bamlets of the Bhars were only evidences of human life. During the period of second world war and thereafter in furtherranceof the grow more food campaign, forest in the district were recklessly cut down. The areas of such land already planted with trees like dhak, khair, babul, shishum, neem, vilayti babul, arjuna, kanji, siras, eucalyptus, mango and jamun are 544 hectares in tehsil Raebareli, 500 Hectares in tehsil salon, 348 hectares in tehsil Dalmau and 61 hectares in tahsil Maharajganj.

FAUNA - Wild animals have greatly decreased in number and variety in the district during the past century. Tigers and wild buffalos were found in the tamarisk jungles and along the banks of the ganga. The wild boar is seldom seen. The indian antelope has been declared a protected species in the district. Neel Gai

BIRDS - The birds of the district are similar to those of the adjoing districts. The chief game of birds found are several varieties of ducks, patridges and pigeons. The pink headed has become extinct.Green pigeons are becoming rare due to felling of fruit and berry trees. The red headed parrot was formely extensively netted for the sake of its plumage. its skin being sent to kanpur for export to Europe.

REPTILES - Different varities of snakes and other reptiles are found everywhere in the district especially in the rural areas. Some snakes are harmless but some are deadly e.g.,the cobra, krait and rat snake. The other reptiles found in the district are the chameleon, geeko and moniter lizard, at the last, becoming extinct due to netting and shooting, protected species. Snake

FISH - Fish are found in the rivers, ponds, canals and artificial reservoirs of the district. About 36 species of fish have been found in this district so far, the chief being the rohu (Labeo rohita), Tengra (Mystas seenghala), parhan (wallagonia attu), mangur(clarius batrachus), saul(ophiocephelus spp.), nain(cirrhina mrigala).

Samaspur Bird Santuary -
Samaspur Bird Santuary is situated in Rohaniya Development block of the district, about 122 k.m from Lucknow on Lucknow-Varanasi highway. It was established in 1987 on a total area of about 799.371 hectare. Nearest railway station is Unchahar and the nearest airport is Fursatganj, Raebareli.The best period of visit is from November to March. More than 250 varieties of birds can be seen here.Some of the birds come here from a distance of 5000 k.m. which include Greleg Googe, Pin Tail, Common Teel, Vision, Showler, Surkhab etc. Local birds include Comb Duck, Whistling Teel, Spot Bill, Spoon Bill, King Fisher, Vulture etc. Twelve varieties of fish are there in the lake at Samaspur.

Dalmau - Statue of King Dal Dalmau is situated on the banks of Holy Ganga and is famous since ancient times. It has been the Historical town of the district. Prominent palces at Dalmau are King Dal's fort, Bara Math, Mahesh Giri Math, Nirala memorial Institute, A well constructed by Ebrahim Sharki, Palace of Nawab Shuza-ud-daula, Baithak of Alhaa Udal, Dalmau Pump canal etc.

Indira Gandhi Memorial Botanical Garden - Statue of Smt. Indira Gandhi at Botanical Garden Indira Gandhi Memorial Botanical Garden was established in the year 1986 in order to restore the ecological balance. The garden is situated on the left side of Lucknow-Varanasi highway. This garden is situated on the northern bank of sai river. In the west of the garden Raebareli- Allahabad railway Line is running which is parallel to Lucknow- Varanasi highway. Indira Gandhi Botanical garden.
Total proposed area of the park is 57 hectare, out of which 10 hectare have been developed till now and it is growing day by day. The purpose of garden is not merely to make it a place for growing flowers, fruits or vegetables but also an educational installation for scientists, reaserch workers/ students and general public for awakening interest in plant life.

Behta Bridge - Aqueduct at Behta This Bridge is situated in the outskirts of the Raebareli city. The important thing of this Bridge is that at this place Sharda canal crosses the Sai river. An aqueduct has been constructed and the canal flows in the duct.

Jais - Jaisi Memorial at Jais Jais is an ancient city of the district. Once upon a time it was the capital of King Udyan. Malik Mohammad Jaisi a great poet belonged to this place. In his memory "Jaisi Samrak" has been constructed there.