The district of Moradabad lies east of the Ganges and west of the native state of Rampur. Its area is 2285 sq. m. It lies within the great Gangetic plain and is demarcated into three subdivisions by the rivers Ramganga and Sot. The eastern tract consists of a submontane country, with an elevation slightly greater than the plain below, and is traversed by numerous streams descending from the Himalayas. The central portion consists of a level central plain descending at each end into the valleys of the Ramganga and Sot. The western section has a gentle slope towards the Ganges, with a rapid dip into the lowlands a few miles from the bank of the great river.

The city is well planned into Enclaves,Vihars & Sectors, etc.It is on NH 24 which is a 4-Laned highway that connects New Delhi to Lucknow 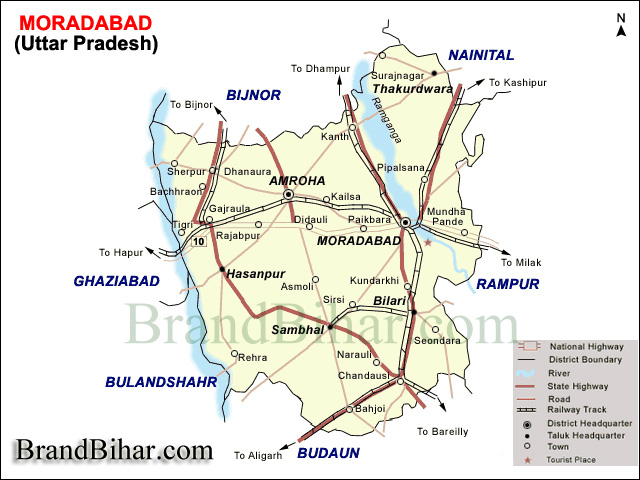 Moradabad is a major handicrafts manufacturing and exporting center famous for its brass handicrafts and thus is known as 'Brass City'. The modern, attractive, and artistic brass ware, jewelry and trophies made by skilled artisans are the main crafts. The brass ware is exported to countries like the USA, Britain, Canada, Germany and the Middle East. There are about 600 export units and 5000 industries in the district.

Jama Masjid, Moradabad - Jama Masjid, a Muslim place of worship located in the Baqipur village of the Moradabad district. This mosque is located very close to the Hamsafar Hall, also known as the marriage hall. It was built in the year 1631 AD by Rostum Khan.

Sai Temple, Moradabad - Sai Temple is located in Deen Dayal Nagar, Phase II region around the Shri Sai Karuna Dham in Moradabad. The temple welcomes followers of all religions. Main deity of the temple is Sai Baba. According to the folklore, he was said to have supernatural powers and healing potential; Shirdi Sai Baba is said to have announced and proved the Oneness of God or which is also referred to as 'Sabka Maalik Ek'.

Vidur Kuti, Moradabad - Vidur Kuti is believed to be the place where Vidura spent the rest of his life after dispute with Duryodhana. . Literally meaning 'the ashram of Vidura', it is an important sightseeing attraction of the Moradabad district. Another significance of the site dates to the time of the Mahabharat when the battle between Kauravas and Pandavas was about to begin. During the period, on the request of both the sides, all wives and children were to be guarded by Mahatma Vidur. Owing to the lack of space for their living, he decided to build an exclusive area for ladies and children, which is now known as Daranagar.

Raza Library, Moradabad - Raza Library is located in Rampur district of Moradabad division. Established in the late 18th century, it is considered as the heritage site for Indo-Islamic culture. The library was built by Nawab Faizullah Khan, the ruler of Rampur, between 1774 and 1794. The purpose of this library was to warehouse various historic manuscripts and miniature specimens of Islamic calligraphy. During the reign of Nawab Ahmad Ali Khan between 1794 and 1840, this library grew in status and popularity. All the Nawabs are remembered for being great scholars, poets, musicians, painters and calligraphers. In the year 1855, Nawab Yousuf Ali Khan Nazim, an Urdu poet himself, took charge of the library. He was assisted by the legendary poet Mirza Ghalib. Nawab Kalbe Ali Khan, during his reign from 1887 to 1889, also added a collection of rare manuscripts to the library. These manuscripts were from the sacred book of Quran, which was brought back by him from his Hajj pilgrimage. After Independence in 1947, the library was managed by a trust until the government took over it's operations on 1 July 1975.

Kanva Ashram - Kanva Ashram, located near Rawli town, finds mention in the legend of 'Abhigyan Shakuntalam'. It is believed that Hastinapur's King Dushyant reached the ashram while hunting and fell in love with Shakuntala at first sight.

Pataleshwar Temple - Pataleshwar Temple is located around 6 km away from Bahjoi in a small village of Sadatbadi in Moradabad. This temple is dedicated to Lord Shiva, who is also known as the destroyer or Mahesh.

Lord Shani Temple is built in black, in order to state it's being dedicated to Lord Shani.

Sita Temple does not contain any idol. Situated 1 km from Nanore Village on Chandpur- Jalilpur road, it is popularly known as 'Sita Mandir Math'. The temple is believed to have been constructed at the place where Sita jumped after the earth parted. Near the site is also located the temple of Dronacharya.

Kunj Bihari Temple has a 200 years old shivalaya, which forms a part of the temple complex.

Bade Hanuman Ji Mandir is said to be around 400 years old and is considered to be one of the most famous temples of the Moradabad district. This temple is placed near the Sita Ashram Playground at Hanumanghari. It is located in the small town of Chandausi of the Moradabad district of Uttar Pradesh. Known for fulfilling the wishes of it's followers, the Bade Hanuman Ji Mandir was built when Lord Hanuman incarnated. Since then, the region has been known for the number of temples built for Lord Hanuman. The temple also has other idols of Lord Ram and his family, Shri Krishna Parivar, Shiv Parivar, Goddess Durga, Lord Bhero Ji, Sai Baba and many more. It is built on a small hill, under which a long cave runs through the entire city.

Braham Dev Ji Temple is situated in Braham Bazar in the small town of Chandausi of Moradabad district of Uttar Pradesh. It is dedicated to Lord Krishna and Goddess Radha.

Lord Venugopal Ji Temple is known for celebrating various functions like 'Krishna Janmashtami' (birthday of Lord Krishna). It is dedicated to Lord Krishna and Goddess Radha.

Rambagh Dham is situated at Rambagh Road near Kaithal village. The temple is home to the Nau Devis or the nine goddesses originated from Goddess Parvati. The temple mainly revolves around Maa Durga and the other idols such that of Radha Krishna Ji, Hanuman Ji, Jwala Ji and many more. Festivals like th TIt is the epicentre of festivals wherethe temple is beautifully decorated. Boogie Woogie, a renowned dance competition has also been hosted here. At the main entry of the temple, Ram Darbar is located, which guards the temple and it's priest due to minimum security around.