Mirzapur is one of the soutern district of Uttar Pradesh. This district is well known for the Vindhyavasini temple at Vindhyachal. Vindhyachal Dham is one of holiest Place in India. Situated exactly in the middle of two pious city Prayag and Kashi. Vindhyavasini Devi temple is here on the bank oof river Ganga. The district consists of several Ghats where historical sculptures are still present. During the Ganges festival these Ghats are decorated with lights and diyas.There are many lovely structures that still exist in Mirzapur today, albeit in a dilapidated state. The famous fort of Chunar was established by Maharaja Vikrmaditya the King of Ujjain to commemorate the stay of his brother Raja Bhartihari who had taken his Samadhi in alive stage and s till that Samadhi Sthal is worshiped. In 2006 the Ministry of Panchayati Raj named Mirzapur one of the country's 250 most backward districts (out of a total of 640). It is one of the 34 districts in Uttar Pradesh currently receiving funds from the Backward Regions Grant Fund Programme (BRGF).

Mirzapur is located between latitude 23.52º to 23.32º and longitude 82.72º to 83.33º. It is spread over an area of 4521 sq. km. It is surrounded by Varanasi and Sant Ravidas Nagar on the north, Allahabad on the west, and towards south east its boundaries are contiguous with Varanasi district, Sonebhadra and the state of Madhya Pradesh. The district measures 64 km from east to west and 32 km. from north to south. 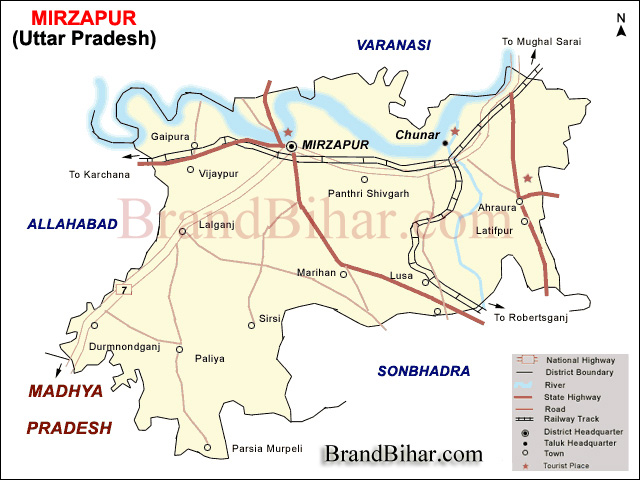 Forest - The total forest cover of the mirzapur district is 109236 hectare. Which is 24% of the total geographical area. The trees like Mahua, Mango,Guawa,neem, saal ,teak etc are found

Administrative set up - The district falls under the Vindhyachal Mandal and the headquarter is Mirzapur tawn. The district has four tehsils namely Sadar Mirzapur,Llalganj Madiyan,and Chunar. The district is divided into 12 blocks. It has 1 lok sabha and 5 assembly areas.

This  historic place lies in  latitude  25.7  North &  Longitude  80.55 East , 32 Km.east of Mirzapur  And  is  connected  by  rail  and  road. It  is  also connected  by  rail  with Varanasi  via. Mugalsarai  in the east.Tradition  asserts  that  Bawan Bhagwan  disguishing  himself  as a  Brahamana begged  three steps of land from king Bali. His first foot-step rested  upon  the  hill  of  Chunar   impressing   it  with  his foot-mark.Consequently, the  hill came to be known as Chunar  Adri  or  footstep   hill. With    the  passage  of  time , the  name  became Chunar. In   the  course  of   time  the  religious  significance of  this  place increased considerably. It is aid   that Bhati  Nath,brother of  the  half    Mythical  Vikramaditya of  Ujjain, having embraced  the habit and profession of a hermit ,selected the rock of Chunar as his place of retirement.Vikramaditya is said to  have discovered   the

This  is  a  large  agricultural  town  lying in latitude 25.10 North and longitude 82.31 East,(a part of Mirzapur- cum – Vindhyachal   municipal  board  ) 11  Km.  West   of    Mirzapur   with   is   connected   by  a metalled road.The  ancient  town of Vindhyachal , famous  in  the Puranas , is said  to have been included  within the  circuit  of  the  ancient city of pampapura .Pampapura is supposed  to have  been an old  Bhar city covering  several  Km.of  area.Tradition says  that  this city once possessed  150  temples, all  of   which  were destroyed by Aurangzeb.The place is celebrated as  containing the shrine of  the  goddess Vindhyeshwari  Devi , which   is visited  by  thousands  of  pilgrims  annually  from  all  parts  of  India ,especially  central  and southern India.The temple ,which is  built  of stone  is of rectangular form,sorrounded by a  verandah,the whole encompassed  by a flight  of   five  steps. The  roof  is  flat  and  the pillars that support it interior   chamber of it  of plain and  coarse workmanship.The image of the goddess is in an interior chamber of small size,the walls being constructed of large coarse  stones. The  head of   the  figure  is of  black stone  with  large  eyes, the whites of which  are formed of plates of  burnished silver, and  the  feet   rest  on  black  rat .The  building  must  be one of   great antiquity .On  the river front  is the devighat, a  fort  like structure adorned  with  six bastions, which  just out  into the river and has a flight of  about 80 steps . From  this  a  long  narrow   paved street leads  to the temple  which  is  about  8Km.distant. The place contains post office , a police station , a pound, a dispansary and a school.

There is reference of Tarkeshwar Mahadev in Puran's which is situated in the  east  of  Vindhayachal. At  present  this  Is in  Tarkapur  ward  of Mirzapur.Before   the  temple  there  was  a  big  Kund  which  had been dug by a jiant (Asur) named  Tarak . Tarak  was  killed  by  Lord  Shiva  so  called Tarkeshwar Mahadev.Near  Kund   there  were  several  shivling . According   to  tradition  God   Vishanu dug a pond in the west of

Tarkeshwar and established a temple of lord Shiva.Now it is disappear and stimulated in Ganga river. goddess Laxmi sacrificed herself here at Tarkeshwar. As per tradition Goddess Laxmi lives here in  the form of another Goddess called Vaishnavi with Goddess Saraswati.

The  river  which  flow  between  Mirzapur  and  Vindhayachal  is  Called Punyajala  (Ojhala) . It   is  said  about  the  ojhala  that  it is  greatest

in all Tirth , as  Ashwamegh in all Yagya, Himalya in all mountain  and truth in  all  Brata  .The  Water  of   this  river  is  as  holy  as  Ganga  river. This is surrounded  by  Goddess  Kali  Temple, Maha  Laxmi , Maha  Sarsawati and Tarkeshwar Mahadev.

Nagkund is stand in the west of Punyajala river  there  are fifty twosteps  around  the  kund. It  was  famous  that  there  was  so  many container(Patra) in  kund and when devotee prayed for his daily  necessities with kund the  container  floated  on  the  water level in  kund  itself . Devotee  got  and satisfied  with  it further  they  kept  the  container in  Kund  and patra dipped in  kund  again . It  was  the most  importance  of  this  kund  for which it was famous. Traditionally  it is  called pilgrims  got Akshaya  punya  after  taking bath in the kund at Panchami of Shukla Paksha of sawan.

Devotee  and  pilgrims  gets  his desirable  Sidhi after  Parikrama of  Maha Trikon  as  it  is  said. After  visiting  at  temple  of  Vindhayavashni  Devi  they goes to Sankat Mochan (Mahabir) temple as well as Kalikhoh which is in south of Vindhayachal  railway  Station. Devotee visit at Goddess kali and worshiped they  make  them  pious  with   the  water  of Kali  Kund. They  completed  their Parikrama  after  visiting  at  saint  Karnagiri  Bawali. There  are  severl temples Situated of  Bhairwas  around  the  Kalikhoh, situation  are  such as - in the east  Anand  Bhairav, in west  Sidhnath Bhairav , in south Kapal Bhairav and Bhairav is situated in north.The view of the visitors to get luxary like haven after visiting at  Vindhayvasani  temple   and  completed   their   Parikrama. Traditionaly  it  is famous  as Maha Trikon.

The  Dewaki  and  Basudev  were  prisoner's of Kans in Mathura. Dewaki  Was the sister of Kans. Kans was afraid of with the eighth son of Dewaki.Inspite of son  a  baby  (girl) was  born  in  place  of  son. Kans  would  have  to kill him. Unfortunately  baby  slipped  from  the  hand of Kans and flew in the sky and ulti mated to  Kans  about  loss  o f his  kingdom. In  future this baby became famous as  Goddess  Asthbhuja  Devi. She  situated  at the top of the Vindhaya Mountain in Vindhayachal.

According to the tradition of Hindu Methology Bhagwan Sri Ram Chandra had   done  the  shardh  of   his  father  king  Dasrath   asper  direction  of  Rishi Basistha in Vindhaya area.First of all Bhagwan Sri Ramchandra worshiped lord Shiva  and  paid  his  dedication  to  Goddess Vindhayavasini Devi. After that he established  a  idol   of  lord  Shiva  in  the west, which is famous with the name of Rameshwar so it is called Shivpur.

Sita ji  dug  a   kund  in  the  west of  Astbhuja b Devi  temple  called  Sita kund. Near the kund  sita  ji  established  lord shiva which became famous with the  name siteshwar, in the west of Sita Kund Bhagwan Sri Ram Chandra dug a kund which  named is Ram Kund.In Shivpur Laxaman Ji Established a Shivling near Rameshwar which is famous as Laxmaneshwar.

The  mausoleum  of   khavaja   Esmile  Chisti  is Situated  in  the ward of Kantit sharif . Annually  ursh  fair celebrated  by Hindu and Muslim both. Near the   mausoleum  there  is  shrine of  Mugal  Kal , which  is very long so called people  were  tall  in the mugal kal. The  shrine  is  known as  Longia Pahalwan shrine.

Around   Mirzapur  city  there  is  so  many  natural  and  religious sites.The Tanda water  fall is  about  seven miles away from the city . Away from the Tanda  water fall there is Khajuri  Dam and Vindham fall. Vindham fall is main tained  by forest department and  developed  as tourism place. The park and Ban Vihar   constructed   at  fall,  a   care  have   been  taken   for  the   protection  of Forest  animals . Now   a  days   Vindham   fall  is  a  attractive place for tourist. Inspite  of  the  place  in  trikon   parikrama   thereare  so  many  places  which is Important  for  both  pilgrimage   and   tourism .The  natural  sites of nature may seen  from  the  top  of  Astabhuja  Devi. In  spring  season  the sight of nature is really  very  attractive  which  may  be  remember  up to a long period which may not be forget . The  Sita  Kund , Bhairav  kund ,Motia  Talab ,Geruaa Talab  Kali khoh , amwshwar, Ramshila  are religious  places  and  have  a  great importance for health.