Mathura District (Hindi: मथुरा ज़िला, Urdu: متھرا ضلع‎) is a district of Uttar Pradesh state of northern India. The historic town of Mathura is the district headquarters. The District is bounded on the northeast by Aligarh District, on the southeast by Hathras District, on the south by Agra District, and on the west by Rajasthan and northwest by Haryana state. The District is part of Agra division. Mathura is located at 27.28°N 77.41°E. It has an average elevation of 174 metres (570 feet). 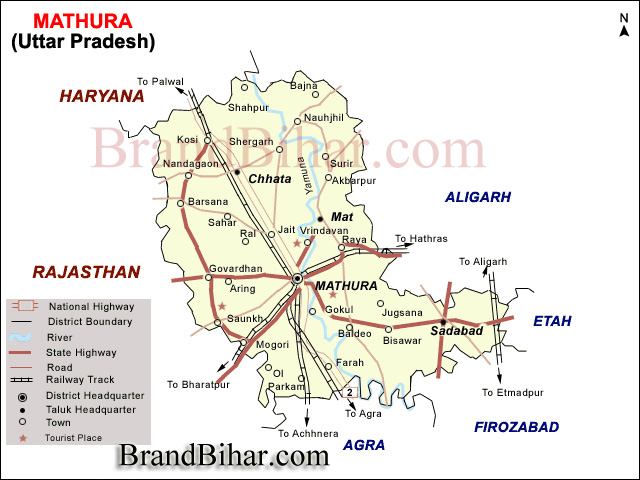 How to Reach Mathura, Uttar Pradesh

As of now the city does not have an airport. The civil aviation minister Ajit Singh suggested Mathura's name for the site of a new greenfield international airport to chief minister of Uttar Pradesh Akhilesh Yadav. Mathura's name came into play when group of ministers terminated the planning of building Taj International Airport at Greater Noida. Land has been marked, and construction is in progress near the Yamuna Expressway, with plans to open in the next five years with regular flights to Delhi, Mumbai, Ujjain and Varanasi and some international routes in future.

Mathura has contributed a lot towards Indian Culture through its rich heritage. The ethos of Mathura, and in fact the whole of Braj mandal is centered on Krishna and his tales. Mathura sees heightened activities during the major festivities dedicated to Krishna.

The Braj culture has been expressed widely through various practices.

Sanjhee is the colourful art of decorating the ground with flowers.

Rasiya is a tradition that is integral to Mathura's culture. It is the tradition of folk-songs that describe the love of the divine couple Radha and Krshnaji. It is an inseparable part of the Holi celebrations and all other festive occasions at Mathura. (Dhulendi – Holi with drums (dholak), colours, etc. originated from Braj region hundreds of millennia before today.)

Raaslilas of Mathura have become an integral part of Indian Folklore. According to popular belief, Krshnaji had danced the Raas with gopis on banks of Yamuna river.

Charkula is a traditional folk dance of the Braj. In this dance, a woman balances a column of deepikas on her head and dances to the accompaniment of Rasiya songs by the menfolk.

The language spoken in the Braj mandal is mainly Hindi which is spoken in a different dialect. This dialect is characteristic with the Braj region and known as Brajbhasha. Before Hindi and until past few centuries, Brajbhasha used to be the dominant language in literature.

Mathura is one of the seven most holy places for Hindus in India.

A Kṣetra is a sacred ground, a field of active power, a place where Moksha, final release can be obtained. The Garuda Purana enumerates seven cities as giver of Moksha, They are Ayodhya, Mathura, Māyā, Kāsi, Kāñchī, Avantikā, Puri and Dvārāvatī.

Mathura is a holy city for Hinduism, the world's 3rd largest religion. There are many places of historic and religious importance in Mathura and its neighbouring towns. The twin-city to Mathura is Vrindavan. As the home of Lord Krishna in his youth, the small town is host to a multitude of temples belonging to various sects of Hinduism proclaiming Lord Krishna in various forms and Avatars. Some places of interest are: