Lalitpur is one of the districts of Uttar Pradesh State of India. Lalitpur District is a part of Jhansi Division and was carved out as a district in the year 1974. Lalitpur is really not only the heartland but also a heart shaped district of Bundelkhand region. It is connected to Jhansi District of Uttar Pradesh by a narrow corridor to the northeast, otherwise almost surrounded by Madhya Pradesh state.
Lalitpur district lies between latitude 24°11' and 25°14'(north) and longitude 78°10' and 79°0'(east)and is bounded by district Jhansi in the north, districts Sagar and Tikamgarh of Madhya Pradesh state in the east and Guna district of Madhya Pradesh separated by river Betwa in the west. The geographical area of the district is 5,039 sq. km with a population of 977,447 as per the census of year 2001.
This district is well known for its culture, peace and natural beauty and have maximum dams in the state. Also has a number of historical and cultural places like Devgarh, Seeronji, Pavagiri, Devamata, Neelkantheshwar at Pali, Machkund ki Gufa.

Lalitpur district forms a portion of the hill country of Bundelkhand, sloping down from the outliers of the Vindhya Range on the south to the tributaries of the Yamuna River on the north. The extreme south is composed of parallel rows of long and narrow-ridged hills. Through the intervening valleys the rivers flow down over ledges of granite or quartz. North of the hilly region, the granite chains gradually turn into clusters of smaller hills. 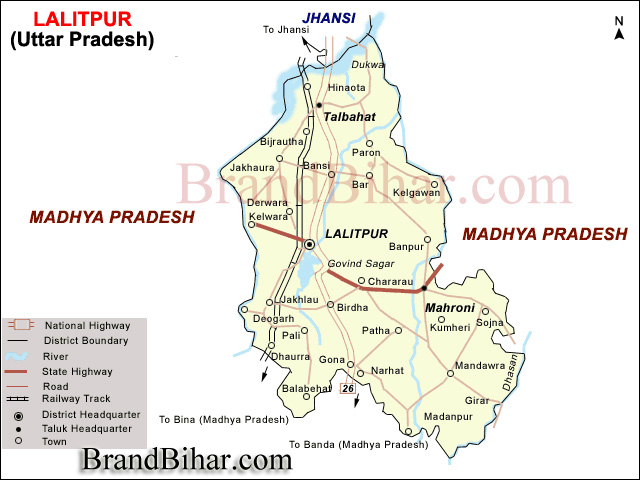 The area is generally rocky. The highest ground is in the extreme south with scraps of the vindhyan plateau, running from the betwa in south-easterly   direction and gradually breaking up into a confined mass of hills, parts of which approach a height of 650 m abobe mean sea level. The north of the scrap, undulating plain of black soil interrupted with scattered hills and scoured by numerous drainage channals, stretches north beyonds the town of lalitpur and gradually becomes more rocky. Low red hills of granitoid rock then appear with long ridges running from south- west to north- west.

Most of the area is bieng drained by river jamni and its tributaries which form its eastern boundry, separating it from tikamgarh district. River betwa forms the western and northern boundry and drains the western part of the district. The south eastern part is partly drained by dhasan river. In general the slope is towards the north.

The hills in the south generally occur in small groups or in continuos narrow chain running parallel to each other from north-east to south-west, the ridges being mostly bare and sharp. The slopes are still comparatively more covered with scrub jungles.

The plateau is intersected by wide valleys particularly in the south west; and the entire tract, once coverred with vegetation, looks barren these day. Mining has affected the whole area considerably.

From the base of the plateau to the town of lalitpur there stretches a black soil plain which is dissected by a number of seasonal rivulets and is characterized by an undulating topography. The principal rivers which traverse the area are the shahzad, the saznam and the jamni.

There is an uneven red soil tract marked by the existence of numerous bare or rocky hills dotted with scrub upto the northern part of lalitpur and mehroni tehsils. It is also traversed by long quartz reefs and diversified by lines of rocky hills.

The soils of Lalitpur are also representative of Bundelkhand comprising all the four varieties. The soils here have developed from the Vindhyan ranges of rocks which in this area are formed of gneiss, granite, quartzite and at times sandstone, limestone and slate. The soils of the district are divided into two broader categories  Black & Red  soil groups. The four varieties of soils are derived from these two groups which are as follows :

1. Bundelkhand Type - 1 : is under the red soil group and locally known as rakar which is also of two types : one known as Bundelkhand 1A which occurs mainly around the rocky ridges in the southern most part of this district while the latter, classified as Bundelkhand 1B, mostly occurs in the northern part of the district. These are not very appropriate for farming but only suitable for afforestation. These soils are also subject to severe hazards of erosion; therefore need to be conserved through embankments.

2. Bundelkhand Type - 2 : or parua. it is also a red soil subdivided as Bundelkhand type 2A and Bundelkhand type 2B. The 2B-soil is found in the central tract of Lalitpur district. This is sandy loam in texture, mature in profile and light to dark grey in colour. This loves water and also needs irrigation during farming.

3. Bundelkhand Type 3 : This is black soil group and consists of two kinds, The type 3A is locally known as kabar and the type 3B is the mar. It resembles very much the black cotton soils as found in central India. The kabar soil which is a coarse grained loam in texture and mature in profile, has high clayey element. It occurs mostly in the southern part of tehsil Lalitpur and Mahroni. This is a very productive soil but needs very careful and timely management; otherwise it becomes difficult to handle.

The mar soils are found around Balabehat in the southern part of tehsil Lalitpur. It is highly clayey in texture, mature in profile and black in colour. This is also a water retaining soil like the kabar but low in coarse sand and soulble salts. The drainage is poor on these soils and management has to be very careful like that in kabar soils.

A strip of alluvial soil is also found in the western part of Lalitpur district.

The climate of the district is the Central India type sub-tropical and may be characterised by a very hot dry summer and cold winter. Like other districts of the Bundelkhand region, this also shows four distinct seasons. Summer being from March to mid-June, Monsoon from mid-June to September, post-monsoonal transition between October and November while the winter months are December to February.

The day temperature is the highest during may/june which falls steeply with the onset of monsoon in mid-june or july. It rises again around september and goes a little higher during october. Then with the beginning of winter, the temperature falls and becomes minimal in janaury.

The usual months of rainfall are from mid-june to the end of september, july being the maximum raining months followed by august and september. Sometimes during winters, especially around the middle of january, there is a cold wave associated with the rains which may last for several days.