Kanpur (/ˈkɑːnpʊər/ About this sound pronunciation (help·info); Hindi: कानपुर; Urdu: کان پور‎; British: Cawnpore), is the largest industrial city of Uttar Pradesh and one of the largest in India. It is the administrative headquarters of Kanpur Nagar district and Kanpur division. It is known as Leather City as it contains some of the largest and finest tanneries in India. It is one of the most polluted cities in the world and the second most polluted in India after Ludhiana (survey 2013). Kanpur is the second largest city of the state and is one of the main the centres of commercial and industrial activities.

Kanpur is situated on the bank of river Ganges and has been an important place in the history of modern India. The city's coordinates are 26.4670° North and 80.3500° East. The Government of Uttar Pradesh has carved out the new district of Kanpur Dehat from the old Kanpur Rural district. Kanpur, along with Allahabad and Fatehpur, are part of the Lower Doab, which in antiquity was known as the Vatsa country. It is surrounded by two main rivers of India, the Ganges in the northeast and the Pandu River (Yamuna) in the south. The districts surrounding Kanpur are Hamirpur in the south and Unnao in the north-east. The arid region of Bundelkhand lies just south of Kanpur. Kanpur district along with Kanpur Dehat district lie between the fertile Doab region of the Ganges and Yamuna rivers. The river Yamuna marks the boundary between the Avadh and Bundelkhand regions. Kanpur City comes under the Indo-Gangetic planes of India. There are facilities of clean drinking water. Water comes from Kanpur City by Ganges Barge and there are various pumping stations for providing water to Farmers for crops. Kanpur is situated on the right side of river Ganges and left side is Shuklaganj which is in Unnao District but is also the part of Kanpur.

Kanpur features an atypical version of a humid subtropical climate that resembles the climate of Delhi to some degree. Unlike many other cities with a humid subtropical climate, Kanpur features long and very hot summers, mild and relatively short winters, dust storms and a monsoon season. Kanpur lies in northern plains of India, which witness extremes of temperature. It can drop to a minimum of 0.0°C in the winters while it goes up to 48°C in summers. Kanpur experiences severe fog in December and January, resulting in massive traffic and travel delays. In summer excessive dry heat is accompanied by dust storms and Loo, traits more commonly seen in desert climates. Rains appear between July and September almost at the end of regular monsoon season. Some rainfall is recorded during the harvest season of March–April. These extremes however, give the region an advantage of having three crops of versatile range of products. Best time to visit Kanpur is either October–November or February–March.Snowfall has never occurred in the city. There are some times Hailstones accompanied with rain in the winter season during the month of January but sometimes Hailstorms have also occurred in the months of March and April. In January 2002,the city witnessed a heavy hailstorm which left the city streets white with ice pieces and recently in 2009 when the last hailstorm was recorded. Dust storms are frequent during the months of April–June.These dust storms are sometimes accompanied with light drizzles. Such dusty winds raise the level of particulates in the atmosphere resulting in severe air pollution and increasing health hazards. Sometimes the speed of winds exceeds to more than 100 km/hr in the outer areas of the city. Kanpur City lies on the right bank of the river Ganges, which is elevated very high from the river, which is the reason that the city never floods. Some of the rural outskirts of the city lie on the flood prone areas of the Ganges, and it often floods the villages on its banks during the monsoon season. The Left bank sandy areas on the banks of the Ganges are cultivated to produce summer fruits like Watermelon. The dry and Hot Loo winds help the growth of watermelon which results in its great yield. The average rainfall recorded in the city is 885 mm.

Important cities and towns of Kanpur Urban Area are:

This body is responsible for administration of Kanpur City area.

Electricity in Kanpur is regulated through the Kanpur Electricity Supply Company (KESA), now called KESCO, while water supply and sanitation facilities are provided by the Kanpur Water Supply and Sewerage Board (KWSSB). The city is facing problems due to erratic power supply and spoilt roads due to laying down of new sewerage pipes. U.P.S.I.D.C (Uttar Pradesh State Industrial Development Corporation Ltd.) Head Office is in Kanpur. 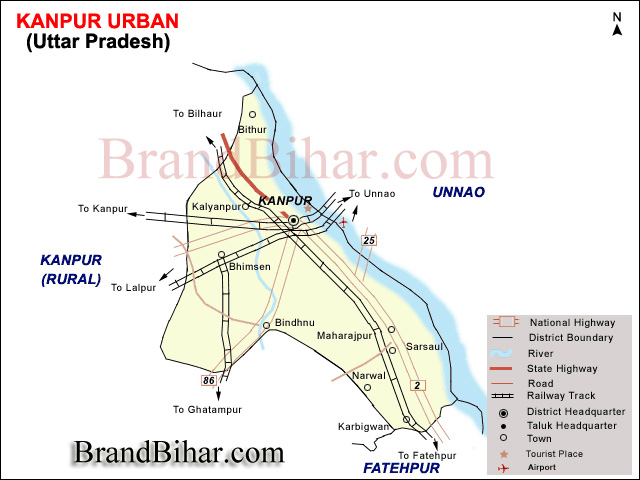 Kanpur is home to many residential and migratory birds. Most of them can be spotted at Bithoor, IIT Kanpur campus and areas alongside the Ganges Canal. In the IIT campus you can find a large number of peacocks and nilgai. The city has Asia's biggest (area wise) zoological garden. Exotic species of flora are present at the CSA campus also. The Kanpur zoo is famous for its cages designed to provide a natural habitat for the animals, and has a vast variety of animals. The water supply system of the zoo is a work of art, by an artist and engineer in the Sinchai Department of that time, Murari Sharan Saxena. He was also known for the design of gates of every Dam in whole Uttar Pradesh of that period. The Zoo is a part of a lush green area - The Allen Forest Zoo, Nawabganj.

Kanpur has a total GDP (PPP) of 22 billion US$ and it ranks as 9th among top 10 Industrial cities in India followed by Surat.

Kanpur is one of the biggest producers of leather productsin the world and they are exported in bulk. Apart from the leather and textile industries, the fertilizer, chemicals, two wheelers, soaps, pan masala, hosiery and engineering industries are also operating in the city. The private sector has also set up large units such as factories of the JK Industries group, Lohia machines, Duncans, etc.

The only unit of the Indian Institute of Pulse Research (an institute of ICAR) and one of the three units of the National Sugar Institute is situated in Kanpur which reflects the strong agrarian nature of industries here.

Kanpur was also infamous to a certain extent for being home to largest tanneries in India and the subsequent pollution they caused thereof. These tanneries were the initial source of industrial base in Kanpur during the colonial period. However owing to poor pollution record, lack of technologies and emergence of other avenues of employment has led to a slow and gradual death to these units.

Kanpur has also begun to find favour among the outsourcing sector as a favoured location with several new startups setting up shop here owing to cheaper costs and a readily available talent pool.

One of the Software Technology Parks of India is also situated in Kanpur in Awadhpuri locality. Central Government has sanctioned Rs. 250 crs to restart Lal Imli Mill in Kanpur which has been closed for a long time. It will again generate employment to 2500/ 3000 persons. It is also home to famous brand Ghadi Detergent powder and cake which is manufactured in Kanpur by Rohit Surfactanta P.Ltd.

Nestling on the banks of the River Ganges, Kanpur stands as one of North India's major industrial centres with its own historical, religious and commercial importance. Believed to have been founded by king Hindu Singh of the erstwhile state of Sachendi, Kanpur was originally known as "Kanhpur". Historically, Jajmau on the eastern outskirts of present day Kanpur, is regarded as one of the most archaic townships of Kanpur district. Up to the first half of the 18th century, Kanpur continued to survive as an insignificant village. Its fate, however, took a new turn soon after. In May 1765, Shuja-ud-daula, the Nawab Wazir of Awadh, was defeated by the British near Jajmau. It was probably at this time that strategic importance of the site of Kanpur was realised by the British. European businessmen had by this time gradually started establishing themselves in Kanpur. In order to ensure protection to their lives and property, the "Awadh local forces" were shifted here in 1778. Kanpur passed into British hands under the treaty of 1801 with Nawab Saadat Ali Khan of Awadh. This forms a turning point in the history of Kanpur. Soon Kanpur became one of the most important military stations of British India. It was declared a district on 24 March 1803.

Kanpur was a hotbed of change in the independence and literary movements during the first half of the 20th century. A popular shopping centre is named Navin Market, after the poet Bal Krishna Sharma aka "Navin". Later poets included Gopal Das "Niraj" who wrote songs for Hindi films. Kanpur is also the birthplace of Shyamlal Gupta 'Parshad', composer of the famous ditty Vijayee Vishwa Tiranga Pyara. The propagation and popularisation of Hindi also owes much to this city, with great Hindu literatteurs such as Acharya Mahavir Parasad Dwivedi, Ganesh Shankar Vidyarthi, Pratap Narain Mishra and Acharya Gaya Prasad Shukla `Sanehi'. The Agricultural University is named after the revolutionary Chandrashekhar Azad and the Medical College after Ganesh Shanker Vidyarthi; both men spent much time in Kanpur. While Chandrashekhar 'Azad' shot himself when surrounded by a huge posse of British soldiers at Alfred Park, Allahabad, Ganesh Shankar Vidyarthi was killed during the Hindu-Muslim riots of 1931 at Machli Bazar in Kanpur. About 25 km from Kanpur is Bithoor(Brahmavarta). Legend goes that Sita, the wife of Lord Rama came to live at the ashram of sage Valmiki, after Rama expelled her from Ayodhya. It was here that she gave birth to the twins Lava (Ramayana) and Kusha (Ramayana), and disappeared back into the earth (from where she was born) when confronted by a repentant Rama. Bithoor is also the site of the fort to which Nana Sahib escaped following the British retaking of Kanpur. Today, Bithoor is a tourist spot on the banks of the River Ganges and Kanpur is expanding very fast with new residential complexes sprouting up everywhere. Among festivals Ganga Mela is a unique festival that is celebrated in Kanpur, 5 days after the festival Holi. Colours are thrown and people greet each other before having a dip in the sacred Ganges. Music, dance and poem recitation are organised in the evening. The festival is celebrated in the memories of revolutionaries released by British government who were held prisoners during the 1857 revolution.

There are currently five FM radio stations and one All India Radio Akashwani Station being broadcast in Kanpur. The 6 Radio Stations are following: