Ghazipur district forms the eastern part of the Varanasi Division . It lies to the east and north of the Jaunpur and Varansai district respectively between the parallels of 25°19' and 25° 54' north latitude and 83° 4' and 83° 58' east longitude. This location is 67.50 Mt. above the sea level.  The length of district from East to West is 90 Km. and Width from North to South is 64 Km. The River Ganges from one side and Karmnasa from other side divided it from Bihar  State. It is bounded on  Ballia and Bihar State in east, Jaunpur, Varansi and Azamgarh in west , Mau and Ballia in north and the Chandauli in south .The boundaries are generally conventional though at places they are marked by natural feature.

The Ghazipur garlanded by  Ganga , Karmnasa and Gomti ,that makes this locality stronger in economic and geographic condition. The total geographic area of this district is 3384 Sq. Km. Ghazipur is embellished with picturesque geographical environs.This Place is a part of Mid gangetic plain.  Total area is aprox. 3,33,209 Hectare in which 2,52,824 Hectare is for Agriculture purpose. Appox 38 % of soil is cattlefield. This district  does not contains any forest area.

Ghazipur was constituted a separate district in 1818. originally the district was very big,including not only modern Ballia but also Narwan of Varanasi ,Chausa of Buxar ( Bihar) and pargana of Sagari,Ghosi,Mau and Muhammdabad in district Azamgarh.The District has five subdivisions  viz. Sadar, Saidpur, Zamania, Muhammadabad  and Jakhania each also forming a tehsil of same name Tehsil Saidpur constitutes the western subdivision of the district.Tehsil and Subdivision Ghazipur constitutes the central part, tehsil Muhammdabad forms the north eastern subdivision and extends eastward from the border of Ghazipur to boundary of Ballia. Tehsil Zamania forms the south western subdivision , The Jahkhnia subdivision , newly constructed tehsil lies in north western part of district. and 16 blocks. Ghazipur district consist of 193 Nyay Panchayats and 1046 Gram Sabhas. Their are Total 2583 inhabited villages and 781 uninhabited villages in district. In Urban sector their are 3 Nagar Paika Parishad ( Ghazipur, Muhammdabad, Zamania ) and 5 Town Areas ( Saidpur, Jangipur,Dildarnagar, Sadaat and Bahadurganj ).

At Administrative structure , Ghazipur is divided in 5 Tehsils and 16 Developments Blocks,details are as follows. 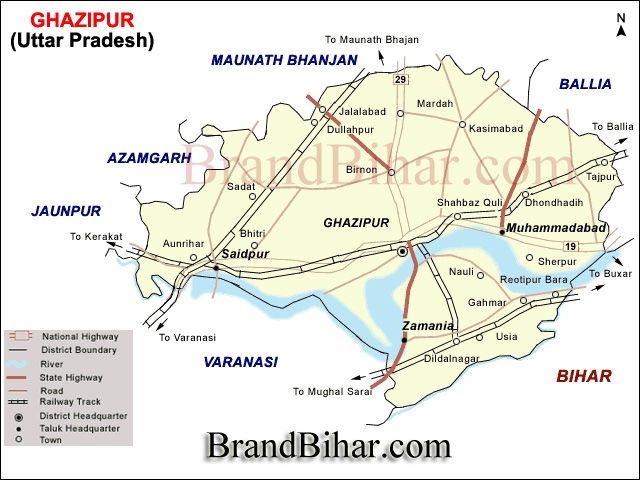 Their are total 23 Police Stations in District Ghazipur.Tehsil Ghazipur consist of 3 Police stations, Saidpur 4, Jakhnia 3 , Zamania 2 and Muhammdabad 5 , in urban area their are 7 Police Stations. There are total 210 Govt. Offices are serving by consisting of 14638 officials. Total 6811 Teachers in 1830 primary schools, 2755 Teachers in 396 Junior High Schools, 2795 Teacher in higher secondary and 332 Teachers in degree colleges are giving their contributions in districts. Their are 55 Class 1 and 391 Class 2 officers are working in district.

As the Ghazipur is attached with Bihar state hence the culture of both state is seen in music & dances. The Birha,a Chaiti, Sohar is very famous. Ghazipur gives many Singer of International repute in Birhaa. The Dhobia and Poorbi Nautanki of this area is very famous folk Dances of this district. when accompanied by enchanting music generated by Harmonium,Tabla,Dhol, Majeera, Nagara,Jhanjh and Kartal at a magic spell on spectator.Ghazipur is also the mother land of Pt. Ravi Shankar of Sitar and Pt. Udayshankar ,Dancer of international repute. Among the communal dances the Phari or Pharia is organiged with the beating of Nagara at the time of marriages still popular.during the rainy season ,the battle song of Alha are sung by professional singers of Nut community.Dhobia dance is common among the Washerman community and this district produces some dancer of national repute. Among the rural folk telling of stories and legends and singing are common.Performances like Nataks and Nautanki,Bhajan mandalies,recitation from Ramayana and the Bhagwat Kathas(religious stories) and Mushairas and Kavi sammelans etc. organiged by various units are also arranged.

As  the  Ghazipur  is main  center  of   Ganga-Jamuni culture from  its  past, so  festivals  of   all  the religions are celebrated  in  this  district. The   composite  culture  gives the good  essence of  Roses for   the ghazipur famous for. Various communities celebrate  as many as 30   festivals  with gay  abandon  and  complete communal hormony. One  important point should be noted for that no communal violence occurred during any festival according to administrative knowledge. Raksha Bandhan, Vaishakhi, Ganga Desehara, Naag Panchami, Makar Shakranti, Krishna Janmathami, Ram Navami, Ganesh   Chaturthi,  Vijaya Dashmi, Deepawali, Karttik Purnima, Makar Sankranti, Basant Panchami,  Shivratri  and  Holi  are  the  main festival of Hindus. Idul Fitra ,Moharram, Idu-juha, Barawafaat and shab-e-barat are the major muslim festivals. Christmas, Easter, Good Friday are  the  important  festivals   of  Christians.  Buddha  Purnima  for Buddha , Mahavir Jayanti for jainis, and Guru Nanak Jayanti & Vaishakhi  are festivals of shiks. As the Ghazipur is Touch of rural culture so many local level festive and fare are celebrated with full joy.  "Dala Chhat"  is celebrated  in  month of November, where the women fasted and pray for their sons and take bathe near ponds and rivers in new clothes.

About 32 fairs big and small are held annualy in the district .Most of the festivals are accompanied by local fairs as welll. of these the Dhanush Yagya fair held at village Katghara in Saidpur. Ram lila fair at Saidpur . The Ram Navmi Fair   at  Karimuddinpur are  important fair. The Govind Dashmi fair held at Jafarpur ( Tehsil Saidpur ) , Trimohini fair at Jalapur ( Ghazipur) and Goril Baba fair are also prominent. Among muslim Muhharam fair is held at 10th day of Muhharam at Ghazipur.

Aunrihar- Aunrihar is situated in lat. 25° 32' N and long. 83° 11' E on the main road leading from Varanasi to Kushinagar on NH 29, about 42 Km. west from Ghazipur city and about 3.2 km. from Saidpur. This place is archaeologically interesting . One of the oldest and most important sites in the district is the belt having collection of mounds stretching from Saidpur to Aunrihar. The whole surface of the ground of Aunrihar is strewn with fragments , large carved stones & fine pieces of sculpture which are being utilised as common building stone. Every few yards traces of masonry wall appears.

Bahadurganj - Bahadurganj town situated on the bank of Saryu. It is at a distance of About 35 Km. from Ghazipur. The Place is said to have been founded in 1742 AD by Sheikh Abdullah the Governor of Ghazipur , who also built a large fort here. A small fair is held here on the occasion of   Ram Navami.

Bhitari (Saidpur) - Bhitari is situated about 32 Km. form Ghazipur near Saidpur town. The name Bhitari is popularly derived from Bhimutri. The Bhitari is archaeologically very important. It is a place of Great antiquity & contains many remains of great archaeological value. It is probable that Bhitari was at one time in hands of Buddhist but it is probably attained its chief importance during Gupta Era.. The most noticeable relic of that Epoch is the famous monolith of red sandstone standing in the fort enclosure on the block of ruff stone. It has a bell shaped capital about a meter high like those of some Akhoka pillars.On it there is an inscription referring to the reign of Skanda Gupta and his succession to Kumar Gupta. The latter name occurs on several large brick that was excavated at the foot of the pillar in 1885 an oval silver plate bearing incription of Kumar Gupta, was found in the adjacent ruins. apart from the pillar the most valuable yields have been a seal and coins giving the Genealogy of nine generations of Gupta kings.The Bhitari was probable one of the royal residences and the influence of Gupta Kings on th  the area.

Virpur (Muhammadabad)- Virpur is situated on the bank of Ganga at a distance of about 35 Km. from Ghazipur. It was the capital of  Tikam Deo, a great Cheru Raja. Old coins and pieces of  sculpture have been found in the fort that was built by Cheru Raja.

Dildarnagar - Dildarnaar lies on the road from Varanasi and Zamania to Buxar and 20 Km. from Ghazipur. Between the town and the station there is mound called Akhandha, said to have been the seat of Raja Nal and the large tank to the west is called Rani Sagar after his famous queen Damayanti. In the center of the mound are the ruins of two temples.

Gauspur - Gauspur , a large village, is situated 14 Km. from Ghazipur. The former Jamidars of the place were Bhumihar who claimed descent from those who cured Raja Mandhata of his leprosy and who in consequence received a grant of land. The tank in which tha Raja bathed is still pointed out on the eastern border of the village and it has ever since been the resort of the persons similarly afflicted. The Raja's fort was as Kathot and adjacent village on the east.Both in Ghauspur and in Kathot are to be found traces of an Hindu civilization, large masses of stone and old bricks have been discovered and in the temple are to be seen several striking pieces of Hindu sculpture. Oldham assigned to these a Buddhist origin and identified the place with the "monastery of unpierced ears" mentioned by Chinese pilgrims Hiuen Tsang and Fa Hien.

Ghazipur - Ghazipur, a town , is situated in Lt. 25 35' N and Long. 83 35" E on Varanasi Gorakhpur National Highway 29. The history of Ghazipur since the days of its traditional foundation by sayid Masood in 1330. According to legend the ancient name of city was Gadhipur.The mound found  in the city may be old dispensary stood is said to be the site of ancient mud fort , that is know as Fort of Raja Gadhi. In the south of city , The Cornwallis monument is present, where the Governor general of India is burried. It is heavy structure with a domed roof supported on twelve Doric columns. the floor is some four mt. higher than the ground and is of gray marble. In the center there is a cenotaph of white marble , bearing on the south side a medallion bust of Cornawallis. In the mid of city there is a tank close to road known as Pahar Khan's tank. The Chihul Satun or hall of 40 pillars, this being the place where Abdullah Khan is buried in the garden known as the Nawab-ki-Chahar-diwari. The Gateway of the palace is handsome but the residence itself is dilapidated. Opposite the chihal Satun a road leaves the main street on left and runs in a north-easterly direction, past the Jami Masjid.There is a Math of Pauhari Baba , great saint of there time is situated 10 Km. from city.As the Ghazipur is situated on the Banks of River Ganges ,hence there are some beautiful ghats , like Mahadeva Ghat, Dadri Ghat,Collector Ghat, Massol Ghat, Chitnath Ghat and Posta Ghat. ChitNath is the oldest one among them.

Saidpur- The saipur town is situated on NH 29 just 30 km from Ghazipur. In the town there are two muslim dargah , one being a small domed building resting on the square pillar. The other are a larger and more remarkable structure with a massive roof of a stone. These town buildings might represents Chaiyas attached to Buddhist monastery.one of being the tomb of Sheikh Samman, who died in 1595 and other are makhdoom Shah.

Zamania - It is an old ,high bank of Ganga about 16 Km.south from Ghazipur. The Town was founded in 1560 by Ali Quli Khan, The governor of Jaunpur and named after his title , Khan Zaman. According to Hindu tradition , it derived the name of Jamadagnia from the Rishi Jamadagni.The Lathiya3 Km, from southeast of the town , there s lathiya pillar,that is circular monolith of polished sandstone 50 cm. diameter and about 6mt. in height. There is bell-shaped capital and above this is a group of eight lions facing outwards.