The primary occupation of the people of the district is agriculture. The area is situated between Ganga and Yamuna (Doaab) which is highly fertile land (Alluvial soil). The farmers are taking even three crops in a year. The water for irrigation is available round the year.Major Agricultural Products: Rice, wheat, barley, jowar, bajra, maize. Raja Ka Rampur is having good fertility for producing the Tobacco. 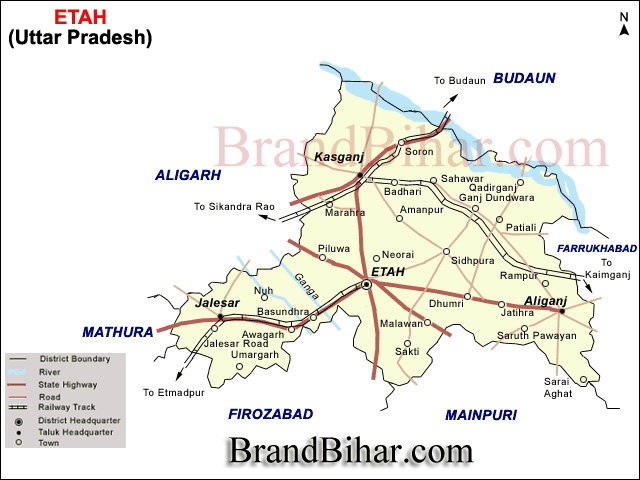 Etah is a developing city. It is the district headquarter since the British times. National Highway 91 (India)(NH 91) passes through city Etah. The Padav maidan (open field ) is the field used for the army during army movements. Every Year this field is use for Ram-Lila at Dussehra in month September and October and for Exhibitions in month from December to February. Only these are the two events in a year when public of district Etah can enjoy the events like Kavisammelan, Dance competition and Fair.

The famous Kailash Mandir at Etah was built by King Dil Sukh Rai Bahadur and is 148 years old. Noah Kera village was famous for marriage of Lord Sri Krishna with Rukmini.