Bijnor, or more correctly Bijnaur, occupies the north-west corner of the Moradabad Division (historically, Rohilkhand or Bareilly region), and is a roughly triangular stretch of country with its apex to the north. The western boundary is formed throughout by the deep stream of the river Ganges, beyond which lie the four districts of Dehradun, Saharanpur, Muzaffarnagar and Meerut, all belonging to the meerut Division. To the north and north-east in the hill country of Garhwal, the dividing ling being the submontane road, which runs from Hardwar along the foot of the Himalayas to Ramanagar, Haldwani and Tanakpur. This road, popularly known as the Kandi Saradk, belongs throughout its length to Garhwal, the transfer having taken place a few years since. On the east the Phika river for the greater part of its course constitutes the boundary, separating this district from Naini Tal and Moradabad, as far as its junction with the Ramganga; and to the south lie the Thakurdwara, Amroha, and Hasanpur tahsils of Moradabad, the boundary being conventional and undetermined by natural features. The extreme parallels of north latitude are 29° 2' and 29° 58' and of east longitude 78° 0' and 78° 57' from Lalitpur, the most northerly point, to koti Rao in the furthest eastern corner the distance in 56 miles (90 km); and from koti Rao to Kamharia in the south-westerly angle 57 miles (92 km); and from Kamharia to Lalitpur 62 miles (100 km). The total area of the district is liable to change slightly from time to time by reason of the erratic action of the Ganges and Ramganga: in 1906 it amounted to 1,145,272 acres (1789.5 square miles, 4634.75 km) the average for the last five years being 1,147,967 acres (4,645.66 km). There remains the low fringe of khadir along the Ganges to the west. This generally resembles the lowlands that skirt the rivers of the interior, the low flats which adjoin the stream itself being purely alluvial in character, while above them rises a terrace of higher ground extending inland as far as the chain of stagnant morasses lying immediately under the bangar cliff. But the khadir in the district, at any rate in the southern parganas, in of a very poor description and no whit better than that on the opposite bank in Muzaffarnagar and Meerut.

The common tongue of the people in the Hindi dialect of Western Hindi. It has sometimes been classified separately as Rohilkhandi, but there is really no marked distinction in idiom or vocabulary between this and Hindustani. 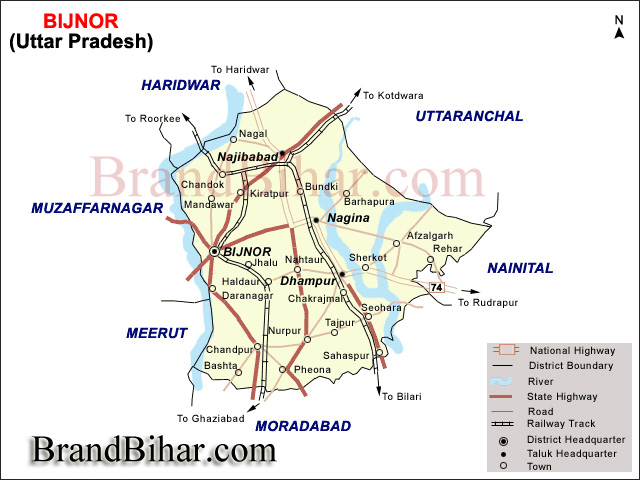 Vidur Kuti is about 12 km from Bijnor and having historical importance. Vidur spent his rest of life after dispute with Duryodhan. This is the place where Lord Krishana visited. Kanva Ashram is an ashram in broken condition near Rawli town according to the great legend "Abhigyan Shakuntalam". Hastinapur's King Dushyant reached there while hunting and fell in love with Shakuntala at first sight. During Mahabharat when the battle between Kauravas and Pandavas was about to begin, then on the request of both the sides, all wives and children were to be guardianed by Mahatma Vidur. He had no sufficient space for their living then he decided an exclusive area for ladies and children, which is now known as Daranagar. Ganj is about 12 km from District HQ and just 1 km from Daranagar on the banks of the Ganges. There are ancient temples and ashrams.

Jahanabad is situated on the bank of river Ganges and just about 1 km from Ganj. This village used to be a riyasat with around 101 villages under it during Mughal Period. Around that period a saint was living there who was famous for curing snake bites. Once when Shahjahan's wife got bit by a snake, he treated and got "Jahanabad Riyasat" as a prize from Shah Jahan. Presently Ganges flows 2 km from here. Sita's temple without any idol is situated one km from Nanore Village on Chandpur-Jalilpur road. This is popularly known as "Sita Mandir Math". It is believed that this is the place where the earth tored and Sita jumped into. Sena Ka Dawar means Army's Gate where Pandavas had settled their Army. There is a temple of Dronacharya presently. This place popularly known as a village Saindwar where Jawahar Navodaya Vidhalaya is established. Two of the Akbar's Navratnas, namely Abul Fazzal and his brother Faizi, were born in the village Azampur which is 4 km from Basta . They studied in this village and were very intelligent.

Najibudaulah's Fort is situated in Najibabad. This fort was built by "Gulam Kadir" alias 'Najibudaulah" during 18th Century after the downfall of the Mughal Empire.

Sikaida is also a very popular place on Bijnor-Nagina road.