Balrampur district is a part of Devipatan division, and historic Awadh region. Balrampur town located on the bank of the Rapti is the district headquarters. Balrampur is known for temple of Pateshwari Devi, a Shakti Pitha, and for ruins of the ancient city of Sravasti, now a pilgrimage site for Buddhists and Jains.

The district's northern border with Nepal's Dang Deukhuri District follows the southern edge of the Dudhwa Range of the Siwaliks. To the northeast lies Kapilvastu. The rest of Balrampur is surrounded by Uttar Pradesh: on the east by Siddarthnagar, Basti on the south, Gonda on the southwest, and Shravasti on the west. Balrampur's area is 3,457 km2.

Economy of Balrampur district -
Balrampur town is known for Balrampur Chini Mills, one of the largest sugar manufacturing industry in the country. In 2006 the Ministry of Panchayati Raj named Balrampur one of the country's 250 most backward districts (out of a total of 640). It is one of the 34 districts in Uttar Pradesh currently receiving funds from the Backward Regions Grant Fund Programme (BRGF). 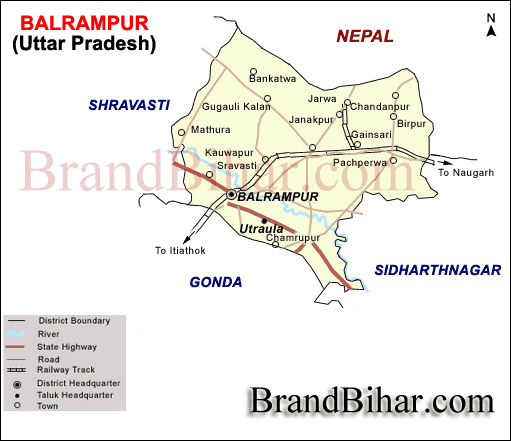 Balrampur situated on the bank of River Rapti, is an important tourist destination in the Lotus tour. It lies at the foothills of the Himalayas. The whole town is replete with Buddhist relics and monuments. The religious sites are the main Tourist Attractions in Balrampur. The ancient city of Mahet lying North of Sahet is famous for its ancient ruins and derelict monuments, This ruin bears testimony to the advance lifestyle here in the days of yore. The great Stupas are located in the premises of the Shobanath Temple. They contain many of the relics and artifacts of Buddhist culture and mythology.

The 12th century inscription can be seen in the Jeetavana monastery in Balrampur District. Even emperor Ashoka is said to have visited this place. Some of the other nearby places of Buddhist Pilgrimage tour which is well accessible from Balrampur are Sarnath, Vaishali, Lumbini, Sravasti and Kushinagar. Balrampur is also known for its sugar mills and DeviPatan Temple.

A lot of hotels have been constructed in Balrampur to accommodate the growing number of tourists here. These hotels and guest houses provide you with comfortable accommodation and dining experience. Balrampur is well accessible by road from Sravasti, Kushinagar and Lumbini

Devi patan temple is one of the most important Shaktipeeths in the region, revered by Hindus in India and Nepal. Located 70 km. from Gonda, it is surrounded amidst the beauty of Himalayan tarai. Just 2 km. from Tulsipur, this famous shrine is among one of the 51 Shakti Peeths. It is believed that during the event when Lord Shiva was carrying the corpse of his wife Sati, the light shoulder of Sati had fallen here.
The Devi Patan Siddha Peeth had been established by Guru Gorakshnath of the Nath Sampradaya. The existing temple here is said by to be constructed King Vikramaditya. In the 1lth century King Suheldeo of Sravasti had renovated the temple. The Royal family of Balrampur, is today the caretaker of the temple. A large fair takes place in Navratri and every year on Chaitra Panchami the deity of Pir Ratan Nath is brought from Dang in Nepal to the Devi Patan temple where it is worshipped along with the Devi.