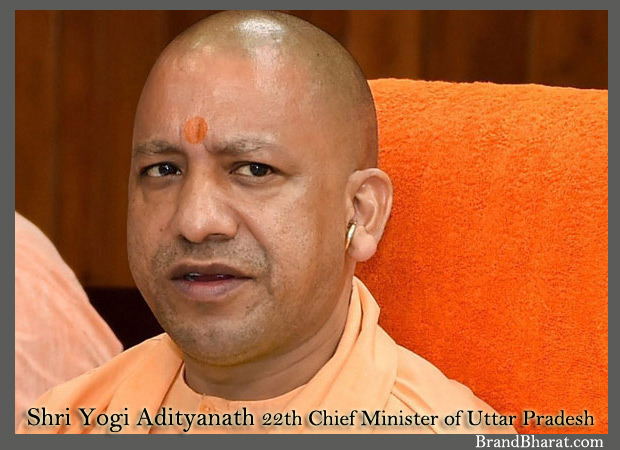 Yogi Adityanath (born as Ajay Mohan Bisht in 5 June 1972;) is an Indian Hindu monk and politician serving as the 22nd and current Chief Minister of Uttar Pradesh, in office since 19 March 2017.
He was appointed as the Chief Minister on 26 March 2017 after the Bharatiya Janata Party (BJP) won the 2017 State Assembly elections, in which he was a prominent campaigner. He has been the Member of Parliament from the Gorakhpur constituency, Uttar Pradesh, for five consecutive terms since 1998.
Adityanath is also the Mahant or head priest of the Gorakhnath Math, a Hindu temple in Gorakhpur, a position he has held since the death of his spiritual "father", Mahant Avaidyanath, in September 2014. He is also the founder of Hindu Yuva Vahini, a Hindu Nationalist organisation. He is often considered a Hindu nationalist due to his controversial views. He has an image as a right-wing populist Hindutva firebrand.

Yogi Adityanath was born as Ajay Mohan Bisht on 5 June 1972 in the village of Panchur, in Pauri Garhwal, Uttar Pradesh (now in Uttarakhand). His late father Anand Singh Bisht was a forest ranger.He was the second born in the family, among four brothers and three sisters. He completed his bachelor's degree in Mathematics from the Hemwati Nandan Bahuguna Garhwal University in Uttarakhand. He left his home around the 1990s to join the Ayodhya Ram temple movement. Around that time, he also became a disciple of Mahant Avaidyanath, the chief of the Gorakhnath Math. Upon taking Diksha as sanyasi of the Nath tradition, he was given the name 'Yogi Adityanath' and designated as the successor of the Mahant Avaidyanath. While based in Gorakhpur after his initiation, Adityanath has often visited his ancestral village, establishing a school there in 1998.