The administrative headquarters of the district is Himatnagar, about 80 km from Ahmedabad.
Sabarkantha District is bounded by Rajasthan state to the northeast, Banaskantha and Mehsana districts to the west, Gandhinagar to the south and Aravalli District to the South - East.
Himmatnagar is a district headquarters, and talukas Prantij and Talod are major industrial locations in Sabarkantha
Focus Industry Sectors – Agriculture, ceramics, chemicals and milk processing
Tourist Destinations – Idar, Polo Forests, Vijaynagar
Key raw materials such as groundnut, cotton, clay, oilseeds and tobacco are abundantly present in Sabarkantha.
The district comprises 7 Talukas. It is spread across an area of 7390 km2. It has a gender ratio of 950 females per 1000 men, and the literacy rate for the district is 76.6%.
It falls under Sesmic Zone 3

Places of interest in Sabarkantha, Gujarat

Darbargadh - About 18 km from Ambaji in Sabarkantha district, Poshina takes one back to the simple beauty of traditional village life, populated by a captivating mélange of colorful tribal communities of the Garasias, Bhils and the pastoral Rabaris. Poshina is home to a tribal shrine where you find the staggering scene of thousands of terracotta horses standing in rows as offerings to the local goddess. Nearby villages have similar horses carved in reverence to her divinity. A visit to the homes of the potters who make these striking horses is an excellent glimpse into tribal culture.
In Poshina you find the Darbargadh Poshina, once a palace, and now a welcoming heritage hotel, with huge gateways, a massive dome, numerous pillars and arches, a pleasant courtyard, gardens, lawns and terraces, owned by the descendants of the Chalukyas, whose empire spread through much of Gujarat and Central India in the 12th century. You also find old Jain sandstone temples of Parshvanath and Neminath and an old Shiva temple.
Poshina is host to the famous Chitra-Vichitra fair, at the nearby Gunbhakhari village, a couple of weeks after Holi.
POLO MONUMENT AND VIJAYNAGAR FOREST 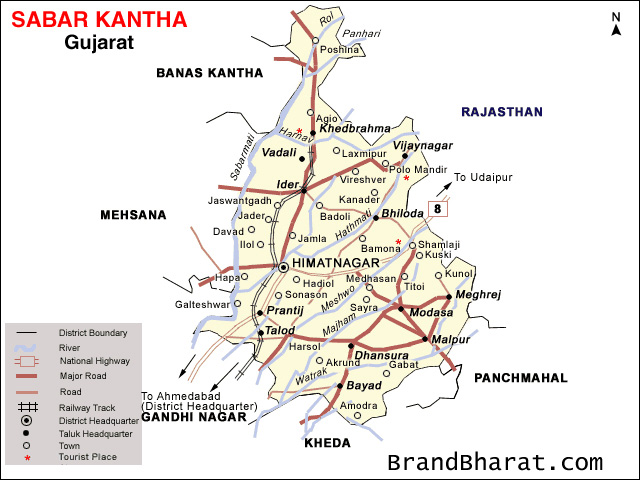