Kutch District, at 45,692 square kilometres (17,642 sq mi), is the largest district in India. The administrative headquarters is in Bhuj which is geographically in the center of district. Other main towns are Gandhidham, Rapar, Nakhatrana, Anjar, Mandvi, Madhapar, Mundra and Bhachau. Kutch has 969 villages. Kala Dungar (Black Hill) is the highest point in Kutch at 458 metres (1,503 ft).
Kutch is virtually an island, as it is surrounded by the Arabian Sea in the west; the Gulf of Kutch in south and southeast and Rann of Kutch in north and northeast. The border with Pakistan lies along the northern edge of the Rann of Kutch, of the Kori Creek. The Kutch peninsula is an example of active fold and thrust tectonism. In Central Kutch there are four major east-west hill ranges characterized by fault propagation folds with steeply dipping northern limbs and gently dipping southern limbs. From the gradual increasing dimension of the linear chain of hillocks towards the west along the Kutch mainland fault and the epicentre of the earthquake of 2001 lying at the eastern extreme of Kutch mainland fault, it is suggested that the eastern part of the Kutch mainland fault is progressively emerging upward. It can be suggested from the absence of distinct surface rupture both during the 1956 Anjar earthquake and 2001 Bhuj earthquake, that movements have taken place along a blind thrust. Villages situated on the blind thrust in the eastern part of the Kutch mainland hill range (viz. Jawaharnagar, Khirsara, Devisar, Amarsar and Bandhdi) were completely erased during the 2001 earthquake.

Rivers and dams
There are ninety-seven small rivers in Kutch District, most of which flow into the Arabian Sea, but some of which feed the Rann of Kutch. Twenty major dams, and numerous smaller dams, capture the rainy season runoff. While most of these dams do not affect the Ranns, as they are on rivers that feed directly into the Arabian Sea, storage of rainy season water upstream from Kutch and its use in irrigation has resulted in less fresh water coming into the Ranns of Kutch during the rainy season. This is true of the Great Rann, but particularly true of the Little Rann which is fed by the Luni, Rupen, the Bambhan, the Malwan, the Kankawati, and the Saraswati rivers. However sea water from the Arabian Sea still continues to be driven into the Great Rann by storm tides aided by high winds. Water remains a serious issue in Kutch.Kutch's thirst for water is satisfied by Narmada river flowing from Sardar Sarovar dam.

Languag
The language spoken predominantly in the Kutch district is Kutchi language, Sindhi and Gujarati. The script of the Kutchi language has become extinct. It is now mainly written in the Gujarati script. Samples of Kutch script are available in the Kutch Museum. The increased use of Gujarati language is mainly because of its being a medium of instruction in schools.

In the villages, staple foods include kadi-khichdi, bajra and milk ; bajara na rotla with curd and buttermilk is very common food for all the Gujarati people. Bajra was introduced by a brave king of this region named Lakho Fulani. During his period of exile, he came to know about this grain in some tribal regions. They also extensively drink buttermilk during lunch. Milk is considered to be sacred food and offering it to somebody is considered a gesture of friendship and welcoming. Settlement of dispute invariably follows offering milk to each other as a concluding remark. In the Kutchi engagement ceremony, the bride's family offers milk to the groom's relatives as a symbol of accepting their relationship.
Tea is the most popular drink in this region and is enjoyed irrespective of sex, caste, religion or social status.

Places of interest in Kachchh, Gujarat 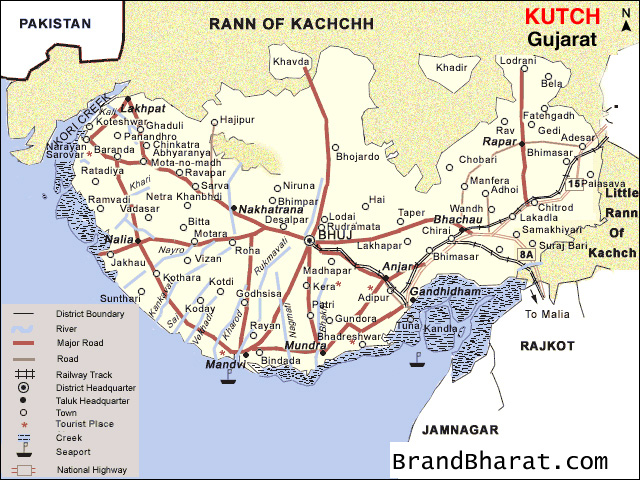