Gandhinagar district is an administrative division of Gujarat, India, whose headquarters are at Gandhinagar, the state capital. It was organized in 1964.

Gandhinagar district is bounded by the districts of Sabarkantha and Aravalli to the northeast, Kheda to the southeast, Ahmedabad to the southwest, and Mehsana to the northwest.

Connected to Ahmedabad by the Sarkhej-Gandhinagar highway, and with Vadodara with the Ahmedabad-Vadodara highway, these three cities form the top population centres and commercial heart of Gujarat and western India.

Gandhinagar city is a well planned city like Chandigarh (State Capital of Haryana & Punjab, India) which is having 30 sectors which are of 1 km each in Length and Width. Each sector has a primary school, a secondary school, a higher secondary school, a medical dispensary, a shopping centre and a maintenance office.

Places of interest in Gandhinagar, Gujarat

Akshardham Gandhinagar is situated in Sector-20. It is one of the major Hindu Temple complex of Gujarat. 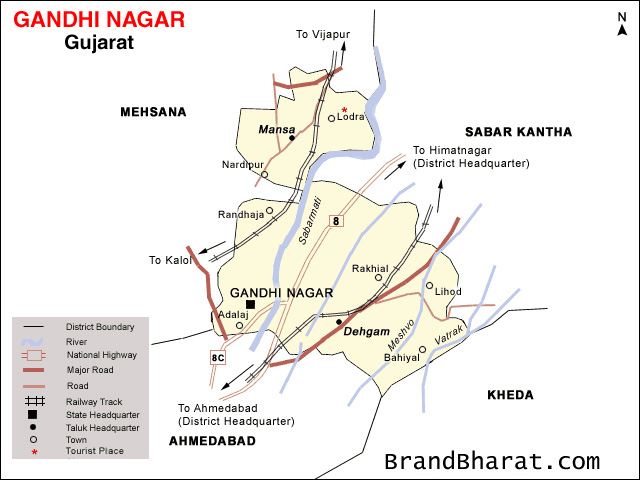