Ahmedabad lies at 23.03°N 72.58°E in western India at 53 metres (174 ft) above sea level on the banks of the Sabarmati river, in north-central Gujarat. It covers an area of 464 km2 (179 sq mi). The Sabarmati frequently dried up in the summer, leaving only a small stream of water, and the city is in a sandy and dry area. However with the execution of the Sabarmati River Front Project and Embankment, the waters from the Narmada river have been diverted to the Sabarmati to keep the river flowing throughout the year, thereby eliminating Ahmedabad's water problems. The steady expansion of the Rann of Kutch threatened to increase desertification around the city area and much of the state; however, the Narmada Canal network is expected to alleviate this problem. Except for the small hills of Thaltej-Jodhpur Tekra, the city is almost flat. Three lakes lie within the city's limits—Kankaria, Vastrapur and Chandola. Kankaria, in the neighbourhood of Maninagar, is an artificial lake developed by the Sultan of Gujarat, Kutb-ud-din, in 1451.

According to the Bureau of Indian Standards, the town falls under seismic zone 3, in a scale of 2 to 5 (in order of increasing vulnerability to earthquakes).

Ahmedabad is divided by the Sabarmati into two physically distinct eastern and western regions. The eastern bank of the river houses the old city, which includes the central town of Bhadra. This part of Ahmedabad is characterised by packed bazaars, the pol system of closely clustered buildings, and numerous places of worship. A Pol (pronounced as pole) is a housing cluster which comprises many families of a particular group, linked by caste, profession, or religion. This is a list of Pols in the old walled city of Ahmedabad in Gujarat, India. Heritage of these Pols has helped Ahmedabad gain a place in UNESCO's Tentative Lists, in selection criteria II, III and IV. The secretary-general of EuroIndia Centre quoted that if 12000 homes of Ahmedabad are restored they could be very helpful in promoting heritage tourism and its allied businesses. The Art Reverie in Moto Sutharvado is Res Artis center. The first pol in Ahmedabad was named Mahurat Pol. Old city also houses the main railway station, the main post office, and some buildings of the Muzaffarid and British eras. The colonial period saw the expansion of the city to the western side of Sabarmati, facilitated by the construction of Ellis Bridge in 1875 and later the relatively modern Nehru Bridge. The western part of the city houses educational institutions, modern buildings, residential areas, shopping malls, multiplexes and new business districts centred around roads such as Ashram Road, C. G. Road and Sarkhej-Gandhinagar Highway.

Sabarmati Riverfront is a waterfront being developed along the banks of Sabarmati river in Ahmedabad, India. Proposed in 1960s, the construction began in 2005

Manek Chowk is an open square near the centre of the city that functions as a vegetable market in the morning and a jewellery market in the afternoon. However, it is better known for its food stalls in the evening, which sell local street food. It is named after the Hindu saint Baba Maneknath.Parts of Ahmedabad are known for their folk art. The artisans of Rangeela pol make tie-dyed bandhinis, while the cobbler shops of Madhupura sell traditional mojdi (also known as mojri) footwear. Idols of Ganesha and other religious icons are made in huge numbers in the Gulbai Tekra area. The shops at the Law Garden sell mirror work handicraft.

Hutheesing Jain Temple
Three main literary institutions were established in Ahmedabad for the promotion of Gujarati literature: Gujarat Vidhya Sabha, Gujarati Sahitya Parishad and Gujarat Sahitya Sabha. Saptak School of Music festival is held in the first week of the new year. This event was inaugurated by Ravi Shankar.

The Sanskar Kendra, one of the several buildings in Ahmedabad designed by Le Corbusier, is a city museum depicting its history, art, culture and architecture. The Gandhi Smarak Sangrahalaya and the Sardar Vallabhbhai Patel National Memorial have permanent displays of photographs, documents and other articles relating to Mahatma Gandhi and Sardar Patel. The Calico Museum of Textiles has a large collection of Indian and international fabrics, garments and textiles. The Hazrat Pir Mohammad Shah Library has a collection of rare original manuscripts in Arabic, Persian, Urdu, Sindhi and Turkish.[citation needed] There is Vechaar Utensils Museum which has of stainless steel, glass, brass, copper, bronze, zinc and German silver tools.

Shreyas Foundation has four museums on the same campus. Shreyas Folk Museum (Lokayatan Museum) has art forms and artefacts from communities of Gujarat. Kalpana Mangaldas Children's Museum has a collection of toys, puppets, dance and drama costumes, coins and a repository of recorded music from traditional shows from all over the world. Kahani houses photographs of fairs and festivals of Gujarat. Sangeeta Vadyakhand is a gallery of musical instruments from India and other countries.

Places of interest in Ahmedabad, Gujarat 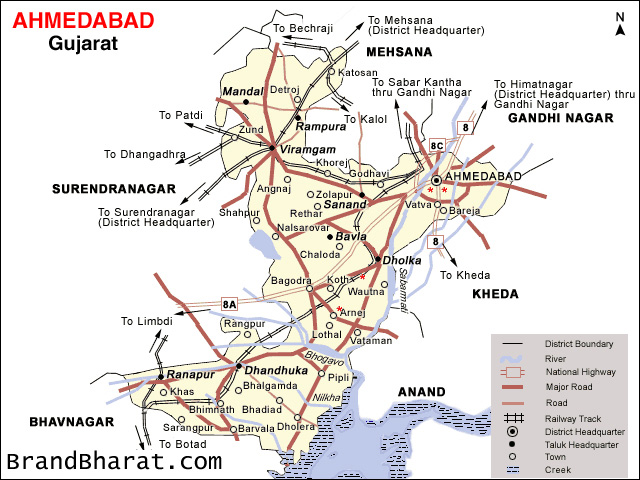