Saharsa district was established on the 2nd  October 1972.

Saharsa was created on  1st  of  April 1954. Formerly it had no independent status and parts of Saharsa were included in the old districts of Munger & Bhagalpur  A large parts of the district in the past was subjected to annual floods and inundation by a host of rivers origination from the Himalayas. The sub terai was noted for rice cultivation before it was subjected to the vagaries of the unpredictable Koshi. 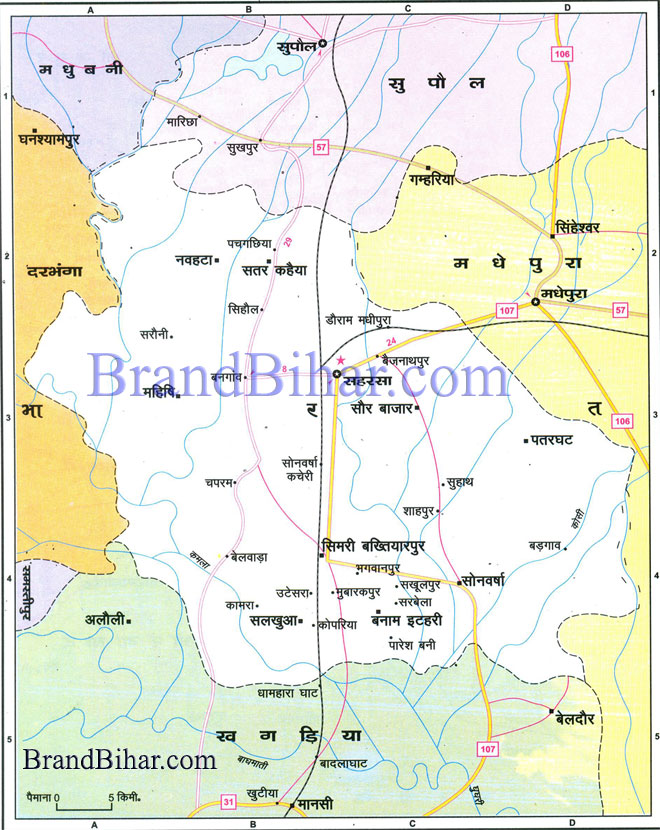 The district has been largely influenced by its geography. Whatever humans of historically important sites that may have existed here have been virtually started by the repeated flooding at the koshi during the last half century or so. With the efforts of some early Europeons however, some important historical objects or landmarks have been preserved in a few places and it is on the basis of these that some kind of a connected account of the early history of the district can be constructed.

Places of interest in Saharsa

It is situated at a distance of about 16 Kms west of Saharsa in village Mahishi where an ancient temple of Bhagwati Tara is built. The idol of Bhagwati Tara is said to be very old and draws devotees from far and wide. On either side of the main deity, there are two smaller female deities which are worshipped by the people as Ekjata nad Nil Saraswati.

Biratpur village under Sonebarsa block of this district is famous for an ancient temple of goddess Chandi. This village is also associated with King Birat of the Mahabharat  age. During exile the Pandavas had lived here for 12 years.

The tantric Scholars and devotees attach much significance to this Chandi temple, which is said to form an equilateral triangle (TRIK) WITH Katyayani temple near Dhamhara ghat and Tara temple at Mahishi. During the Navratra people from distant places visit the village to offer prayers to the goddess of power.

The place is situated in Mahishi Block.  It is said that a religious discourse (Shastrarth) was held between Shankaracharya and  the local scholar Mandan Mishra.   Bharti, wife of Mandan Mishra, who was also a great scholar, was named as Judge for the discourse. It is also said that Shankaracharya, after his initial victory over Mandan Mishra  was challenged by Bharati, was outwitted by her and he accepted defeat.

Like Deb (in Aurangabad district), the SUN  Temple at Kandaha village is an important religious and historical place which has been duly recognized by the Archaeological Survey of India.

The idol of sun god riding seven horsed chariot, has been carved on a single granite slab. At the door of the sanctum sanctorum, there are inscriptions which a deciphered by historians, confirm that this sun temple was built during the period of king Narsimha Deo of Karnata dynasty who ruled over Mithila in the 12th century. It is said that a brutal Mughal emperor named Kalapahad had damaged the temple which was however renovated by the famous saint poet  Laxminath Gosai.

The famous saint an poet of which is hardly 9 Km away from the district head quarter. The huge bunyan tree under which the remains of Laxminath Gosaiji have been preserved is the centre of great reverence for the people of the district.

One Shiv Ling is established in the temple situated in Sahpur-Manjhoul of Nauhatta block. It is said that the Ling was established by Maharaja Shalivahan some time in 100BC. The Hindus celebrate a festival called jitiya after the name of Jimutbahan who was the son of Maharaja Shalivahan. Description of this place is found in Shri Puran. The ancient shrine at Dewan Ban was washed away by the turbulent Koshi river. The local people have however build another temple in the adjacent area.

It is an old village, important since the time of Mughals and is presently the head quarters of the block of the same name. The village has a ‘Shiva temple’ about 80 feet in height. The temple which was damaged in the earthquake of 1934 was reconstructed by Raja Srinand Singh of Srinagar Estate.

There is a grave of Madho Singh on an earthen mound about 50 feet high. Madho Singh had become a martyr in the battle of Ladri Ghat. Offerings are made on he rave both by Hindus and Muslims.

The village is situated in Kahra block. It contains an ancient image of goddess Durga discovered during excavation. According to a legend one Sone Lala Jha dreamt that he had received divine instruction to excavate a particular place. The image was found at that very spot and latter established in the temple. Devotees throng here from far and wide. A fair is held on the day of Maha Ashtami Puja every year.

Situated on the bank of Kosi River, there is a temple of Saint Karu Khirhari  who is said to have attained divinity by virtue of  his Shiv-Bhakti a dedication to Cows. People from all walks of life come to offer milk to Karu Baba. Although this temple near Mahpura village-2Km away from Mahishi block office, is situated in the riverside of the eastern Koshi Embankment. It has survived on the slaught of the turbulent river. Recently the Bihar Government has announced to develop Karu  Khirhari  temple as a major tourist spot.

The barren water logged area  in Saharsa town has been developed as a beautiful place commonly known as Matsyagandha Mandir.

The construction of Rakta Kali temple and an oval shaped temple with 64 deities (known as 64 - Yogini) engraved  on the inner walls of temple, attracts devotees from far-off places. The Bihar Government has  established  a  beautiful  tourist complex at this place.