FORMED IN 1875 FROM DISTRICT TIRHUT

The Muzaffarpur district is famously known as the “Land of Leechi” ( Shahi Leechi and China Leechi). The district was created in 1875 by splitting the Tirhut district for administrative convenience. The district is bounded by the Purbi Champaran and Sitamarhi district on North, on the South by Vaishali and Saran district, on the East by Darbhanga and Samastipur district and on the West by Saran and Gopalganj district.

Places of interest in Muzaffarpur

1. Garib Sthan Mandir Temple - Located in the heart of the city, the Baba Garibnath Temple is another one of the most popular attractions of Muzaffarpur. The idol of Lord Shiva resides in the temple as Baba Garibnath, and according to local legends, it is said that the Shivling was acquired from the Peepal tree where the temple is now situated. The man, who had the shrine built, was said to have gotten the tree cut down so he could build a house over it, but when the seven branches were broken, blood and water oozed out only to reveal the Shivling. The temple now attracts devotees in a large number, and during the festive period of Shravan, water from the sacred rivers of Ganga, Gandak, Kaveri etc are brought to bathe the Shivling in.

2. Jubba Sahni Park - Named after the freedom fighter and revolutionary Jubba Sahni, the children’s park is found in the Mithanpura area of Muzaffarpur. Jubba Sahni Park is like that of any other children’s parks, but a tourist attraction nevertheless due to the lush green trees, shrubs, and the cool grass that the adults love to lounge upon while the kids have their fun. The queue of tall lamps across the park light up the area after sunset.

3. Litchi Gardens - Muzaffarpur being the producer of about 3 lakh tonnes of Litchi every year, the Litchi Gardens are the most sought after destination for tourists. Bochaha, Jhapaha and Mushahari are the well-known gardens located within a 7km radius of the city. The Litchis Shahi and China produced here are known for their excellent quality and aroma. Best time to visit is from May to June during cultivation, and to witness the ripe fruit is quite an attraction.

7. Ram Chandra Shahi Museum - In the midst of the Jubba Sahni Park, Ramchandra Shahi Museum that was constructed in 1979 showcases various artifacts, statues like that of Ashtadik Pal and Manasa Nag, which are a divine sight to behold. There is also a collection of ancient utensils along with the intricately created statues that are a major attraction of the museum.

10. Khudiram Bose Memorial - An 18-year-old fighter by the name of Khudiram Bose, was arrested along with Prafool Chaki on the charge of throwing a bomb on Kingsford, the then British Sessions Judge of Muzaffarpur. He was executed in 1908 at the Muzaffarpur Jail and Khudiram Bose Memorial was raised opposite the present residence of the District and Sessions Judge. The road where the alleged bomb was thrown is called the Prafool Chaki Marg in front of the Red Cross Building. The historical spot finds itself in the midst of various tourists who wish to know about the escaped revolutionary who was soon arrested, and took the sentence given to him with a smile upon his face, as those of his likes did. 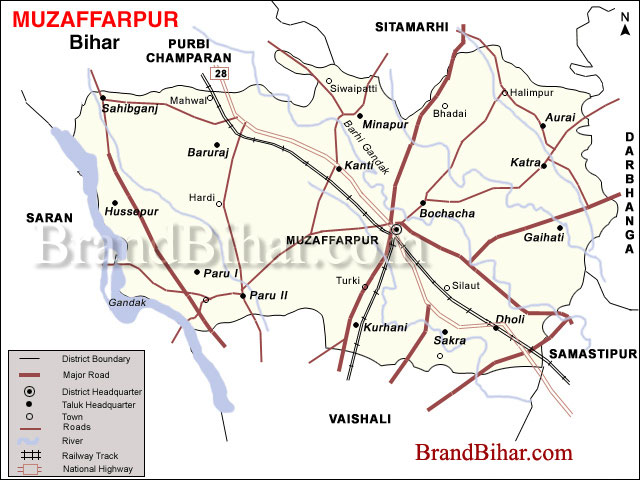