Jehanabad was carved out of old Gaya district on 1st August, 1986. It was a sub-division of the Gaya since 1872. The main aim behind the creation of this district was to accelerate the pace of development in tandem with tackling the problems of extremism, poverty, unemployment and underdevelopment.

The rivers Sone, Phalgu, Dardha & Yamuna cris-cross the district. The river Sone that touches the western part of the district is the only perennial river. Rest of the rivers are seasonal. The river Phalgu has got religious importance where the Hindus offer “PIND DAN” to their fore fathers.

The climate of Jehanabad is of extreme nature, i.e. very hot in the summers and biting cold in the winters. The average rainfall of the district is 1074.5 mm. Out of the total rainfall 90 percent comes from monsoons. The economy of the district is agriculture based. The soil is very much fertile known as “KEWAL” in local terms. This soil is very suitable for the production of rice, wheat, cane, etc.

The language spoken here is “MAGAHI”, a dialect of Hindi.

There is one sub-division and seven blocks in this district. The blocks are Jehanabad, Makhdumpur, Kako, Ghoshi, Modanganj, Hulasganj and Ratni. The last three blocks are of recent origin. Besides the district police headquarter, there are 13 reserved Police Stations in the district. 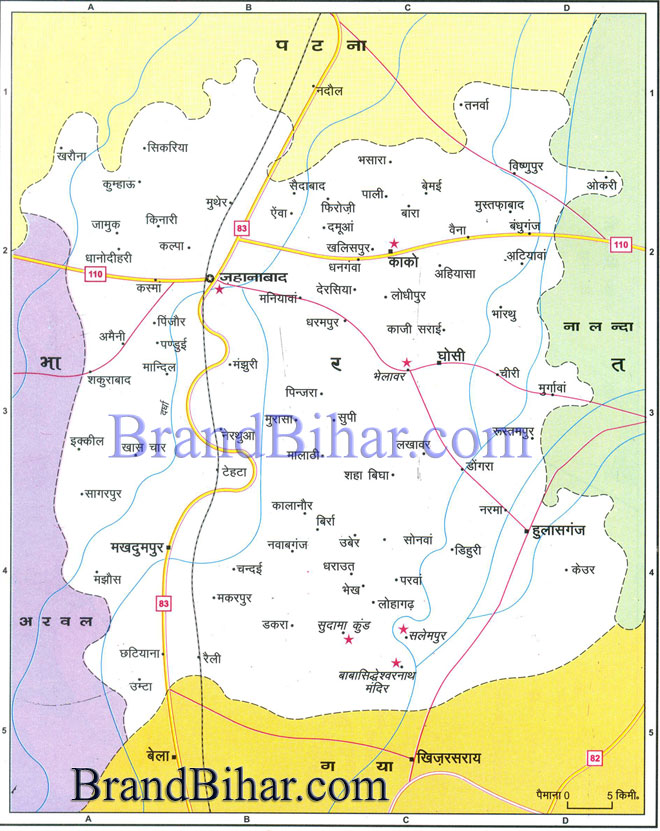 The district is linked both by road route and rail route. The Patna-Gaya branch railway line, popularly known as the “P.G. Line”, crosses through this district and links the main line of Patna and Grand Chord Line of Gaya. There are four-railway stations and 31 km long railway line in this district. The road route is via Masaurhi block of Patna district, which goes directly to Gaya via Makhdumpur block of this district.Road distance from Patna is 70 Kms. and from Gaya is 45 Kms.

No major minerals are found in the district.

There is an industrial area in the district of Jehanabad which is spread in the area of six acres on Jehanabad-Kako Road.

Places of interest in Jehanabad

The Barabar International Tourist Centre is situated in the hilly area of Makhdumpur in Jehanabad (Bihar) situated at a distance of 50 kms from Gaya and 75 kms from Patna. The place is world famous for its ancient Seven Rock cut Buddhist Caves and as the place of origin of Ajivak sect. Famous for its sheer panoramic grandeur and rugged natural beauty, very few places can match Barabar. The serene, calm and unpolluted surrounding provides mental relaxation, total freshness and vigor.

Road Route:-- Any one can go here by road. On Patna-Gaya Main road , towards south of Jehanabad at 16th k.m. there is Mussie more. From Mussie more towards east at 10th K.m. it is situated.

Best Season:--  From The month of November to February. In the month of  July-August "Sraawani Mela" is organized. It Starts from the 1st day of  Hindi "Saawan Month", and observed for one  month.

Barabar,or VANAVAR, as a matter of fact, is one of the oldest places of Indian civilisation. It has connections with the Mahabhartha period. The great warrior of Mahabharata war, Ashwathama is said to be wandering even today in the valleys of Barabar. He had become immortal with the grace at Lord Sidhnath i.e. Lord Shiva, whose temple exists on the top of the highest mountain of Barabar hills.

In ancient times, Barabar was known as “KHALIT PARWAT” or “Nagarjuni parwat”. During Mahabhartha period, this was known “Gorthagiri” Either because the demon king Vanasur ruled here or because almost all the hills are of same height, this place came to be known as Banavar or Barabar in course of time. Vanasur was the senapati of the king Jarasandh and had constructed a fort on the hills, the remains of which can be seen even today. On the eastern side of Patal Ganga, Vanasur had also established the new city named “Ram Gaya” on the banks of the Nirajana river known as Falgu now-a-days. The remains of this city have also been found in the forms of bricks and rocks.

Since Bimbisar to Dashratha, the Mauryan ruling period helped Barabar in flourishing. King Bimbisar was the contemporary of Lord Buddha. The Great Mauryan king Samrat Ashoka got constructed a number of caves on the request of one of his queens for saints of Ajivak sect. Ashok’s grand son, Dashrath also got constructed caves for saints of Ajivak sect and Buddhist monks. During the reign of Pushyamitra sung, its religious importance got lessened and it was used of an army fort. During his period, Barabar was attacked by the great ruler of Orissa king kharwel. He demolished the “Gorthagiri Fort”. This has been established by his Hanthi Cave inscription, situated at Udaygiri Mountain

There is an organic relationship between Barabar & Buddhism. Some historians believe that this is the place where Lord Budha meditated for a long peroid of 12 Years, and from here only he moved along side “Niranjarna river” (Falgu) towards Bodh Gaya where he got enlightenment. If this fact can be established through research and survey of the area this place will be of no less importance than Bodh Gaya and Sarnath.

Near the second Nagarjuna cave constructed by the Mauryan king Dashratha there are ruins, which according to cuningham was a Buddh-Vihar and was demolished by Muslim attackers and made a platform instead.

The Kaua Dol Mountain head resembles like a Buddha-Stupa. In the eastern basement of it, the famous Buddhist scholar of Bengal, Sheel bhadra had got constructed a large and beautiful Buddha-Vihar. Here a large statue of Lord Buddha has been found on a platform. This image of Buddha in “Bhumi Sparsh” Mudra is one of the largest statue of Buddha and is in fair preservation. The figure is about eight feet higher with a breadth of four feet across the shoulder and six feet across the knees. The Chinese traveller Huen-TSang has also described about it in his travelogue.

The English writer E.M. Foster’s book “A Passage to India” contains a good description of the Barabar hills. In his book he has referred Barabar as “Marabar”. The main characters of his novel visit this place. The heroine of his novel gets wounded in one of the caves and her Indian friend, a Muslim doctor gets arrested and later gets released with the help of the heroine.

The movie “ A Passage to India” also shows the Barabar mountain, Patal Ganga and the caves. It seems that Barabar was a fascination for Englishmen & Englishwomen.

On completion of 100 Years of E.M. Foster’s book, correspondents of the Pioneer, Lucknow had visited Barabar and a description was published along with Photographs in the Sunday edition of the Pioneer, some years back.

Situated at Mussi more in Makhdumpur on Patna-Gaya International tourist route, the gate welcomes the tourist from all over. The design of gate is based on Ancient Buddhist traditions and is a fine blend of modern architect and ancient culture and traditions.

Mirabigha village (Dist. Jehanabad) is situated at about 4 km. South-East of Tehta Railway Station. This archaeological site is characterized by a cluster of temples, mostly Shaivite, numbering about a dozen. Most of them are brick-worked with some stone appendage. There are ruins of an ancient tank, which may be associated with the site.

The site also yielded a host of Brahmanical deities, who once would have resided in these temples.

Both, the temples and sculptures, belong to the Pala period of the 9th-10th cent. A.D. 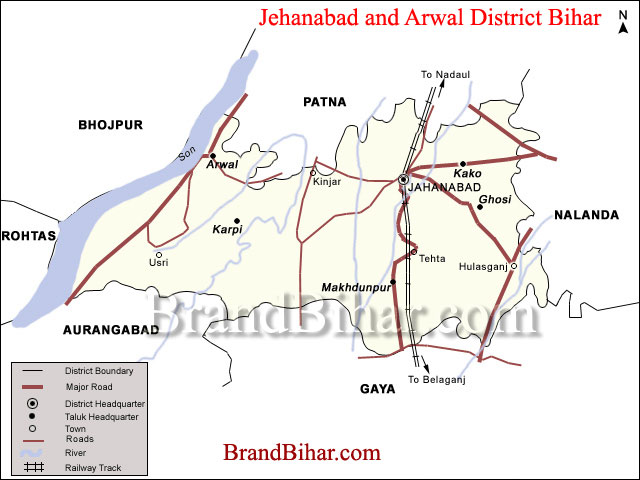