Gaya has been the origin of several sweet delicacies popular in the whole of Bihar, Jharkhand and the rest of India. Tilkut, Kesaria Peda, Lai, Anarsa of Ramana road and tekari road are the most popular sweets that bear the trademark of Gaya.

Tilkut being the most popular of them is prepared using til or sesame seeds (Sesamum Indicum) and jaggery or sugar. It is a seasonal (winter) sweet and only the karigars (workers) from Gaya are believed to impart the real taste of Tilkut. One can find Tilkuts carrying the label "Ramna, Gaya" and "Tekari road, Gaya"even in far flung places like Kolkata and Delhi. Ramna and Tekari Road are the areas in the city where every other house is a Tilkut factory.

Kesaria peda is yet another delicious sweet prepared from khoya (solid milk cream) and kesar (saffron). The Chowk area of the city specializes in Kesaria Peda production.

There are several varieties of Lai available in Bihar, including Lai from Gaya. The main component of this Lai is Ram dana seeds. These ram danas are processed and mixed with koya and sugar to give rise to a disk shaped sweet.

Anarsa is also based on khoya, but is deep fried and processed with sugar. Anarsa comes in two shapes 'thin disk' and 'spherical'. The sweet is finally embedded with til (sesame) toppings.

Sabudana-Badam Bhoonja is a dry snack that is unique to the Gaya city. It is a mixture of fried sabudana (sago) and fried badam (groundnut or moongfali is called badam or sometime chiniya-badam in Bihar) along with salt (both white and black), chilly powder and jeera (cumin seeds) powder.

Chanajor garam is one of the most spicy snacks made up of black gram and  traditional (typical) masala,being served with lemon juice and typical powder.

Places of interest in Gaya

Bodhgaya is one of the most important and sacred Buddhist pilgrimage center in the world. It was here under a Pipal tree, the Bodhi Tree, Gautama attained supreme knowledge to become Buddha,the Enlightened One. Born; in the foothills of the Himalayas as a Sakya prince of Kapilvastu (now in Nepal), most of the major events of his life, like enlightenment and last sermon, happened in Bihar. Buddhism as a religion was really born in Bihar and evolved here through his preaching and the example of his lifestyle of great simplicity, renunciation and empathy for everything living. Significantly, the state's name of 'Bihar' originated from 'Vihara' meaning monasteries which abounded in Bihar. Several centuries after Buddha's passing away, the Maurya Emperor Ashoka (234-198 BC) contributed tremendously towards the revival, consolidation and spread of the original religion. It is the monasteries, Ashoka built for the Buddhist monks and the pillars known as Ashokan Pillars erected to commemorate innumerable historical sites associated with the Buddha's life, mostly intact to this day, that helped scholars and pilgrims alike to trace the life events and preaching of a truly extraordinary man. There is a magnificent Mahabodhi temple and the Tree from the original sapling still stands in the temple premises. The temple is an architectural amalgamation of many centuries, cultures and heritages. While its architecture has a distinct stamp of the Gupta era, it has later ages inscriptions describing visits of pilgrims from Sri Lanka, Myanmar and China between 7th and 10th century AD. It is perhaps still the same temple Hieuen Tsang visited in 7th century.

The temple stands in the east to the Bodhi Tree. Itsarchitectural effect is superb. Its basement is 48 square 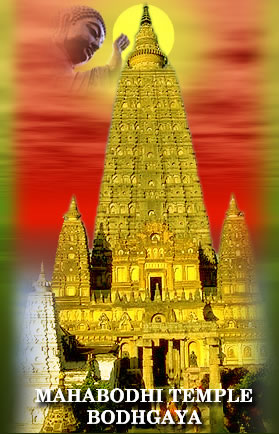 feet and it rises in the form of a slender Pyramid till it reaches its neck, which is cylindrical in shape. The total height of the temple is 170 ft. and on the top of the temple are Chatras which symbolize sovereignty of religion. Four towers on its corners rise gracefully giving the holy structure a poise balance. This sacred edifice is like a grand banner unfurled by time to proclaim to the world the pious efforts of the Buddha to solve the knots of human miseries, to ascend above worldly problems and to attain transcendental peace through wisdom, good conduct and disciplined life. Inside the temple, in the main sanctum, there is a colossal image of the Buddha in sitting posture touching the earth by his right hand. In this posture the Buddha accomplished the supreme enlightenment. The statue is of black stone but it has been guilder by the devotees. The entire courtyard of the temple is studded with large number of votive stupas. These stupas are of all sizes built during the past 2500 years ago. Most of them are extremely elegant in structural beauty. The ancient railings, which surround the temple, are of the first century BC and are among the very interesting monuments of the century.

It is believed that the Buddha spent one week here looking towards the great Bodhi tree out of gratitude, without twinkling his eyes.

The present Bodhi Tree is probably the fifth succession of the original tree under which the Buddha had attained enlightenment. Vajrasana, the seat of stability, is a stone platform on which the Buddha is supposed to have sat in meditation gazing east, under the Bodhi tree.

This marks the sacred spot of the Buddha's meditative perambulations during the third week after pious enlightenment. It is believed that wherever the Buddha put his feet lotus sprang up.

The Buddha spent one week here, where it is believed that five colors came out of his body.

It is an important archaeological site. The caves carved out from solid rocks bear details of the life of the Buddha. The interior of these caves is chiseled to a wonderful polish. The carvings in the caves reflect the skill with which these caves were carved out. These caves were built in the 3rd century and are fine examples of the skill which the Indian mansion had attained at that time. These caves of Mauryan period are rightly considered to be the origin of Indian cave architecture. It was here in these caves where the Buddha had meditated for some time and concluded that the ultimate knowledge can not be attained through mortification of the flesh. Baitul Anwar, situated at Gewal Bigha, a famous Khanqah of Ahl-e-Sunnat founded by Shah Noorul Huda; his successor Siraj-e-Millat Allama Sirajul Huda has been a famous religious personality in Bihar.