The present Bhojpur came into existence in 1992. Earlier this district was part of old Sahabad district. In the year 1972 Sahabad district was bifurcated in two parts namely Bhojpur and Rohtas. Buxar was a subdivision of old Bhojpur district. In 1992, Buxar became a separate district and rest of Bhojpur district has now three sub-divisions - Ara Sadar,Jagdishpur and Piro. Ara town is the headquarters of the district and also its principal town. Rivers are Ganga and Sone 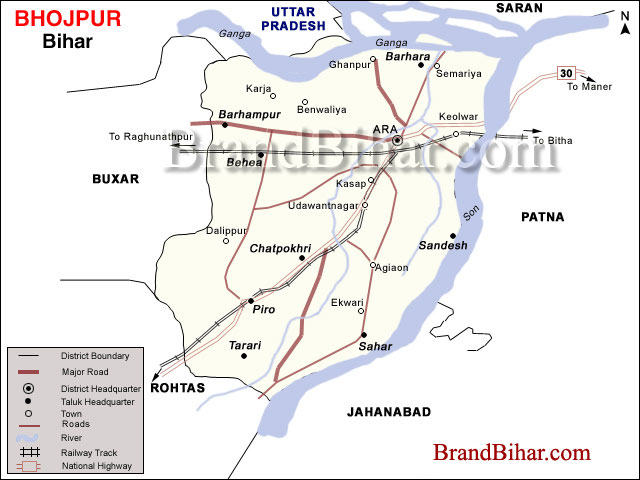 The new Bhojpur districts consists of three sub-divisions, viz., Ara Sadar; Jagdishpur and Piro comprising 14 development blocks stretching over an area of 2,37,526 hectors. The entire strip of land between the river Ganga on the north and the main line of Eastern Railway on the south is low laying deposits of silt from the Ganges almost every year and is extremely fertile. In fact, this region is considered to be the best wheat-growing area in the state of Bihar .

The district has rivers running almost three sides-North, East, and some part of Southern boundary. The Ganges forms the northern boundary of the district. The low-lying rich alluvial plains in the north-eastern and owe their fertility to the river Ganges . The rivers Chher and Banas fall into the Ganges .

The Sone is another important river in the district. The Sone enters the state of Bihar at the tri-junction of Palamu  (Jharkhand), Mirzapur (U.P.) and Rohtas( Bihar ). It runs along the southern and eastern boundaries of the district of Bhojpur until it merges in the river Ganges near Maner in Patna district.

According to the District Statistical Report. There 1244 villages in the district out of which 251 are non-residential and 993 residential. There are 228 Panchayats and 12 revenue circles, 6 Town areas, 22 Police Stations, 5 Sub-Police Stations, 1 Railway Police Station, 7 Out-Post-Police Stations in this district, This report also provides the information about Post and Telegraph, which is as follows :

The climate of the district is of moderately extreme type. The hot weather begins about the middle of March, when hot westerly winds begin to blow during the day. The months of April and May are extremely hot. In a normal year, the monsoon sets in by the third week of June and the rains continue with intermissions till about the end of September or the early part of October. The cold weather begins from the month of November and lasts till the beginning of March January is the coldest month when temperature comes down as low as 10 degree centigrade. From the month of April till the first break down of the monsoon, the district experiences occasional thunder-storms also.

Rains set in June accompanied by a fall in temperature and increase in humidity. The district experiences maximum rains during the months of July and August. The average rain-fall, in the normal conditions, recorded in these months is in the proximity of 300 mm. The district gets easterly winds from June to September, which brings rains, From October the direction of the winds is reversed and westerly winds blow till May. There is slight rainfall in October, but November and December are quite dry. Some winter rain occurs in January and February.

The river Sone and Ganges are the perennial sources of surface water. They can provide irrigation to major portion of agricultural lands. In the "Pre-Zamindari Abolition" days the Zamindars used to maintain "Ahars" and Pynes" which served the purposes of both irrigation and drainage in certain pockets of the district. Ordinary wells also used to be a good source of irrigation.

In this district both the irrigated and un-irrigated areas except the small hills are being exploited for cultivation. Even some of the large ponds and "Jhils" which were duck-shooting areas have been de-watered and put to crop and grows "Boro crops". Intensive agriculture is also being attempted by what is popularly known as "Package Program". The Block Development Authorities are also trying to extend cultivation and improve the output. The remodeled Sone Canal System has the objective of bringing in more land under cultivation. Horticulture is spreading and orchards are springing up of all parts.

Mines and minerals resources in new Bhojpur district are very little. The only mineral product in this district is the sand from Sone river. About 40 Kms. length of Sone river forms the part of southern and eastern and eastern boundary of the district of Bhojpur. The only managed sand - collecting centre is Koilwar, which is about 5 Kms. strips. About 35 Kms length is not properly managed to gather the sand.

The District Statistical Report shows that between Apr-1992 and Aug-2000, 1085 small tiny and cottage industries were registered with the District Industry Centre, Bhojpur. Altogether the capital invested in these industries is Rs-869.19 Lacs. and 1858 persons are employed in these industries. There is an industrial area located at Gidha (Koilwar) spread in an area of 30-40 acres of land under the Patna Industrial Development Authority. A bottling plant of Indane Gas (LPG) is also started in this area. The development of industries depends on the regular supply of power but the district gets very short supply of the electricity against the required energy. The industrialization of the district badly hampered due to this problem.

Places of interest in Bhojpur

Sun Temple at  Dev :
The Dev village of Tarari block has statue of the SUN GOD besides several other deities. These statues are said to be of 14 th century or even before.

Veer Kunwar Singh Kila , Jagdishpur
The great warrior of 1857 belonged to Jagdishpur. His fort is still there to reminds us of the great son of the soil who fought for the freedom till his last.

Maharaja College, Ara
The present Maharaja college premises is an  important historical site.  There is an entry point of a tunnel that is believed  to be connected with the Jagdishpur fort of Kunwar Singh.

Shahi Masjid :
This five Gumbad mosque, the second of its kind in India was constructed by Shahjahan in 1623 AD. This is situated near Aranya Devi temple.

Karbala, Mosque of Maulabagh :
This mosque was built around 1817 with Aurangjeb's assistance. It is situated at Maula Bagh muhalla at Ara.

Aranya Devi Temple
This is famous temple of Aranya Devi  ( Forest Goddess ). She is   said to be the deity goddess of Ara  town  . Here one statue is of ADI SAKTI and the second is established by the PANDAVAs . The temple is very old and draws  many devotees every day. It is situated at  the top of stone boulders.

Jagdamba Mandir
Here is an ancient statue of Goddess Jagdamba at Mukundpur village of Charpokhari block.

Parswanath Mandir
It is a century old Jain Temple located at Masadh Village.

Mahamaya  Mandir
This temple is at Ekwari village of Sahar block. This was made during Mughal period.

Mahathin Mai  Mandir
This is located at Bihiya, draws lots of women devotees.

Jain Sidhant Bhawan
It  has a such library which contains unique collection of materials related to Jainism.

Paihari Jee Ka Ashram
It  is an ashram at Dhrampur village at Sahar block.

Lakar Sah Ki Mazar
It is situated at Sahpur, it a famous mazar of a local muslim saint.

Kurwa Shiv
There are some ancient statues related to Banasur. It  is situated in  Shahpur - Billoti Road.

Venkatesh Mandir
This temple situated at Perhap village has a statue of Southern architectural style.

Sahi Jama Masjid
This  mosque built by Shersah is located at Garhani Bazzar.  Renovation work is in progress here.