(xxvi)   No. Of Engineering College 1

(xxvii)  No. Of Agriculture College 1

(xxviii) No. Of Medical College 1

Sultanganj (25 km) is a real celebration of natural splendor that thrills our visual sense. Imagine a hill by the bank of the river capped by a mosque while another rocky elevation in the midst of water riddled with temples of Shiva, referred to as Ajagaibinatha. The legend of Ajagaibinatha is associated with Baba Harinath a regular visitor and fervent devotee of Shiva. On his way to Deogarh, he once emptied his pot of water to quench the thirst of a dying man. He was left with no water for Shiva at Deoghar. Consequently, he was returning to Sultanganj when he heard a voice telling him that Shiva was pleased by his devotion and he could now worship him at Sultanganj as well. The panorama can best be summed up in words of Abdul Latif, the Mughal Diwan of Bengal who passed by Sultanganj in 1608. He records, "It has two hillocks, one in the midst of the river and other on the bank, facing each other, so that there are few places on earth equalling it in airiness. How can I describe the moonlit nights, which exhilarate the spirit and freshen the life of man."If it is monsoon, it is time for the Shravani mela when Sultanganj is well flooded by the flow of pilgrims and the extra dash of water calls for the small boats to reach the temples high on hillock. The devotees of Siva gather here to collect the holy water (called Uttarbahini or where the Ganges run towards north, instead of usual south) to be poured on the various Shivlings at Vasukinatha and Baidyanath Dham.Between the two hills there are smaller granite formations with a number of interesting Gupta period carvings that are exclusive to Bhagalpur. These artistic etchings on the rock depict a variety of Hindu divinities, besides Buddha and Mahavira.Sultanganj shot to fame in 1861 when a railway engineer, during the construction of railway track between Calcutta and Varanasi, stumbled upon a stupa that yielded a mighty bronze statue of Buddha in Abhaya mudra. The seven feet high bronze dating back to fifth century is now in Birmingham city museum. National Highway 31 runs through the entire Naugachia Police District and subdivision. This highway connects the subdivisions directly to Patna via Begusarai and Khagaria and runs up to Guwahati via Purnea-Kishanganj. In addition, Mokama Farakka road has also declared as National Highway No. 81. It passes through Bhagalpur town and Kahalgoan.

The total length of P.W.D roads is 287 Kms. and R.E.O roads is 263 Kms. Because the district is flood prone, road in many areas are in poor condition. Many area in the Diara are inaccessible and has increased the sensitivity of the district for elections. 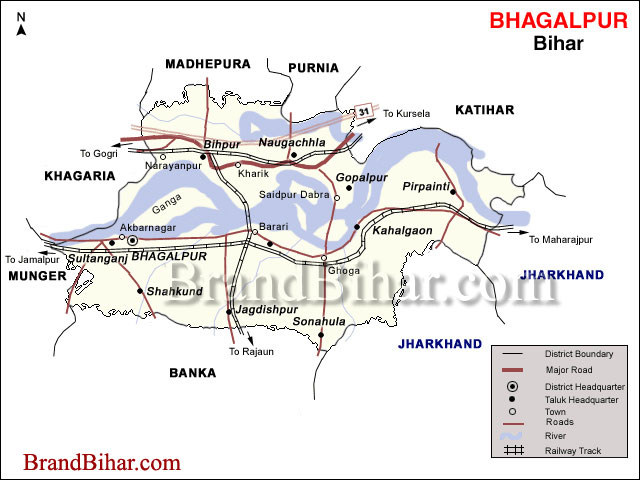 Bhagalpur lies on the broad gauge Loop line of the Eastern railway running from kiul to Burdwan. Important stations in this District on this line are Sultanganj, Bhagalpur, Sabour, Kahalgaon. A branch line runs from Bhagalpur to Mandar Hill (21 Kms.). North Bhagalpur is served by the Barauni-Katihar section of the North Eastern Frontier Railway. Narainpur, Bihpur, Naugauchia and Katihar Railway Stations lie on this line.

Places of interest in Bhagalpur

The leavening brush of India’s ancient history exerts everywhere in Bihar. Bhagalpur today is a silent town, a low key destination, if at all it finds a mention in the tourist map. Amidst its bluntness one can feel the past resonating here. After all, it ranked among the six best Indian cities at one time.

Bhagalpur: - 60 km from Munger by train or bus is Bhagalpur, associated with memories of the great Bengali novelists Sarat Chandra and Banaful. It would be better to travel to Bhagalpur by direct trains 3071 Howrah Jamalpur Exp or 3133 Sealdah-Mughalsarai Exp which leave at 22-30 hr and 20-55 hr and reach Bhagalpur next morning at 7-15 hr and 6-40 hr respectively.

Tour Bhagalpur town by a rickshaw on contract basis. First see the High Tower, Temple of Dudheswara Mahadeva, the Uni¬versity and the Jain Temple at Nathnagar. Passenger trains run from Bhagalpur to Nathnagar, just 4 km away. On return to the town, you may visit Kuppa Ghat Ashram on the Ganges in a charming environment by rickshaw. On the return road there is the Agricultural college. Bhagalpur is reputed for its silk. Next morning travel to Sultan-ganj, 25 km away from Bhagalpur by train and visit the Siva Temple of Aajgaibinath on the summit of the hill on the Ganges. Boat is the only conveyance here. Buses and mini buses also run to Sultanganj from Bhagal¬pore and Munger. On the way to Howrah tourists may get down at Vikramsila Halt to see the ruins of the Vikramsila University of the past. They may go up to Bhagalpur by 16-01 hr Burdwan-Jamalpur Passenger train and from Bhagalpur they may back to Howrah by Jamalpur-Howrah Exp or Mughalsarai- Sealdah Exp which leave Bha¬galpore at 20-10 hr and 1-20 hr respectively and reach Howrah and Sealdah next morning at 5-10 and 12-55 hr respectively.

The Royal University of Vikramsila -

The royal university of Vikramsila, 38 km from Bhagalpur ranks next to Nalanda and owes its origin to Dharmapala (770-810 A.D.), the devout Pala king who loved to call himself Paramasaugata (chief worshipper of the Buddha)and was a great patron of Mahayana Buddhism.Dharmapala was impressed by two things which prompted him to establish Vikramsila university. Firstly, the rocky hillock anchored around the confluence of Kosi and Ganga at Vateshwarasthan was not only a scenic attraction but a popular tantric site as evident from the presence of a Kali temple (instead of Parvati’s) in front of Shiva temple, besides various other caves and rock cut sculptures dating back to the 6\7th century A.D. Secondly, the place was associated with pilgrimage due to Uttarbahini which drew large crowds during Varsavardhana.Unlike Nalanda, sources of information on Vikramsila is confined to Tibetan texts and they make us believe that Dharmapala in his earlier birth was an accomplished acharya, Kampilya, who had attained siddhi or perfection in Mahayana mudra mysticism here and was determined to build a monastery one day.

Mandar Hills (50 km), steeped in legend and laced with landscape of extraordinary splendour exposes the 800 feet high granite hill. Mandar is associated with amritmanthana which suggests that the hill was used by the gods to churn the ocean to procure amrit. The serpent, Basukinaga offered to serve as the rope and has left behind an impression of the coil on the granite hill. It is believed that panchjanya, the conch shell used in Mahabharat War was discovered here in the Sank kund. The puranas refer to various sacred places on the hill which is also believed to be the abode of Vishnu under the title of Madhusudana or the destroyer of a demon called Madhu who was killed by Vishnu and then covered by the Mandar hill. Kalidasa’s kumarasamahava refers to foot marks of Vishnu on the slopes of Mandar.The hill is replete with relics of bygone ages. Besides inscriptions and statues there are numerous rock cut sculptures depicting various Brahmanical images. The hill is equally revered by the Jains who believe that their 12th Tirthankara attained nirvana here on the summit of the hill.

Bhagalpur Railway junction is a one of the oldest station of India. It is the heart of Bhagalpur.It is the main junction of Hawrah-Kiqel loop-Line. It is well computerized station and directly connected with Delhi, Patna and Kolkatta.

This is situated in west-south from 2 Km. of Bhagalpur Railway Station. This is the place of IBADAT. The PAHLAM OF Mhuharam is taken at this place.

This is situated in west from 2 Km. of Bhagalpur Railway Station. This is the first post graduate department where the course of Gandhi Darshan is conducting.