Begusarai occupies a central position in North Bihar. In 1870 it was established as a sub-divison of the Munger district. It emerged as a district in 1972. It was named after "Begu" a man of this district who used to look after "Sarai" an old and small market. 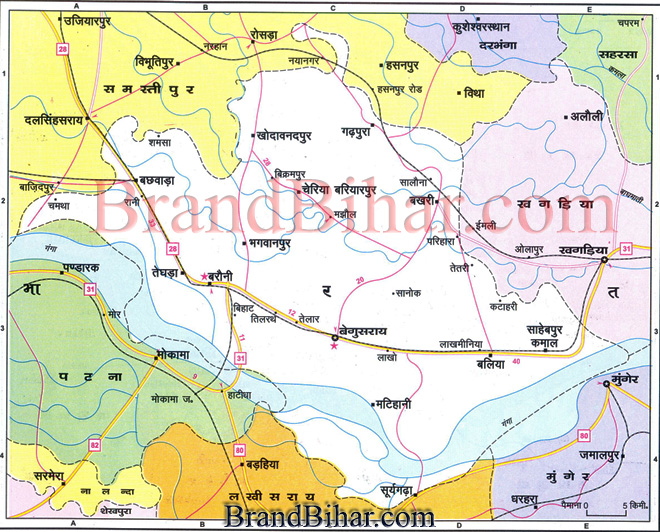 Geographical features: Begusarai lies in North Bihar between latitudes 25°15' and 25° 45' north and longitudes 85°45' and 86°36" east. This town expands perpendicularly from east to west which used to be a main link road. It is bounded on the north by Samastipur, on the south by the Ganga and the Lakhisarai district, on the east by Khagaria and Munger and on the west by the Samastipur and Patna districts.

Minerals : No minerals of economic importance

Forest : This district does not comprise of any forest. In contrast to the eastern portions of the old district of Munger, this district lying south to the Ganga does not comprise of any forest of sal and other large trees. At most of the places, there are gardens of mango and litchi. Chakmuzaffar a village of Naokothi block is famous for banana. Apart from these, Babul, Neem, Guava, Lemon, Gamahar, Peepal, Bamboo, shirish are also found. Shisham is one of the most important ones of them.
Wild animals are scarcely found in this district. However, birds are seen in large numbers in various colours, particularly in the bird sanctuary of Kaver Lake. As of now 59 types of birds from abroad and 107 types of birds from home have been recognized.

Sources of Livelihood : Agriculture is the mainstay here. 88.33% people depend upon agriculture. Main cash crops of the district are oilseeds, tobacco, jute, potato, red chilies, tomato and andi.
The traditional occupation in this area has been the rearing of milch cattle. Animals are used in agricultural work even today. In urban areas rearing of cows of hybrid quality has increased. Despite domestic use of milk, a huge quantity of milk is sold to the Barauni Milk Composite Dairy Industry. This gives lucrative income and employment to the people of  Begusarai.

INDUSTRY: Begusarai is nationally and internationally known for its industrial recognition. Major industrial units are:  Indian Oil Refinery- Barauni, and Hindustan Fertilizer Limited -Barauni, Thermal power station- Barauni and hundreds of small industrial units in the private sector in which Hindustan Fertilizer Limited -Barauni is on the verge of closure.
This district has potential for agro- based industries because of large production of maize and oilseeds, etc, as mentioned earlier.

Places of interest in Begusarai Infrastructure: Begusarai is well connected to other parts of Bihar and India through railways as well as roads. New Delhi - Gawahati railway line passes through Begusarai. Small aerodrome in Ulao, five kms from the district headquarters, which is used on the arrival of very important persons. Railway has a route of 119 km (B.G.) and 67 km (M.G.).  Barauni Railway Junction occupies an important position. A number of important trains originate from this station for distant destinations, viz, Delhi, Guwahati, Amritsar, Varanasi, Lucknow, Mumbai, Chennai etc. Rajendra Setu on the Ganga is connected to Mokama and Howrah. There are 18 railway stations in this district.  Interior parts of the district are connected to the main roads.The National Highways 28 and 31 link this district to the other parts of the country. Its total length is 95 km. State roads have the total length of 262 km. 95% of the total villages is linked to the rural and urban road facilities.

During summer due to high temperature this becomes an area of low pressure. During this period Bay of Bengal, due to its geographical characteristics, serves as homeland for cyclones. Being on area of low presser, the plains of Begusarai and associated areas attract these cyclonic winds. This leads to the dust storms. These dry, hot, dusty storms are locally termed as ‘Loo’. These are prevalent in the month of May-June.
The rainfall is average in this area. The average annual rainfall in this belt of Ganga- Burhi Gandak is 1384mm of which 83% falls between Mid June and & Mid-October. Monsoon normally starts in June and lasts till October. The early monsoon currents, channeled to he NW are the principal source of rainfall of the region. 17 % of pre monsoonal rains, which is spread in the different months of the year (specially in the months of November- December-January) have been explained as due to Norwester affect and rest during monsoons due to Himalayan affect. Heavy rains, supplemented by physiographic/geomorphic features lead to heavy flood.
The chilling winter starts in mid-october and continues till initial periods of March. Most part of the winter is dry except some sporadic rains as mentioned above.

River Ganga enters into the southwest part draining the Chamtha block in the district. This river along with its flood plains, “Chaurs” and “Tals” determines the boundary of the district in the southern part.
The Burhi Gandak, the 2nd most important river, also known as Sirkahana in its upper reaches, enters the district near Parihara about 10 km upstream of its confluence with the Balan River.  It forms the boundary with Samastipur district in Khodawandpur and Cheriabariyarpur blocks. This is a river showing very high sinuosity and has characteristically low slit content than other Himalayan rivers. After traversing a distance of approximately 100 Km. it drains in Ganga near Khagaria .The river cause periodic floods in the western part of the district.
River Balan enters the district in the Bachhwara block. After taking a course of app 30kms km. it drains into Burhi Gandak River 5 km west of Manjhaul. This is also a highly sinuous stream
Bagmati – A very Juvenile stream of North Bihar plains, drains only the northeastern corner of district. It enters into the district near Bakhri and is well known for its unstable nature and spill channels. After traversing the low-lying valley areas, it meets the Kosi near Sankosh outside the territories of the district. It is responsible for floods in the northern part of the district.
Baintia River is a plain fed stream originated in the adjoining district of Samastipur and enters in Bhagwanpur block of the district. Upstreams, in the Samastipur district, it is known as Jamwari Nadi. This drains into Burhi Gandak after joining the Balan River. It is also a stream having water round the year. Baya Nadi drains the district Teghra, Bachhwara and Barauni block. It merges with river Ganga at  Roopnagar near Barauni fertilizer factory. This is a stream which does not show any sinuosity in the Begusarai district and is a perrennial stream. In the mid of the Burhi Gandak flood plain lies a vast fresh water lake known as Kawer Tal, which is basically a wetland formed by shifting of river BurhiGandak.  Kawartal gets its water either due to rains or due to near-by overflowing rivers such as Burhi Gandak, Bagmati

Kawar Tal is one of the examples of excellent wetlands, which are found in the flood plains, and is the largest freshwater lake in Northern Bihar. It lies between Burhi Gandak, Old Bhagmati and Kareh rivers. The lake is formed by the meandering action of Gandak River and is now a residual ox-bow lake, one of the thousands in Bihar and Uttar Pradesh flood plains. In years of high rainfall, vast areas of these two states get flooded. This causes coalescing of wetlands and forms one huge expanse of water. During these times the wetlands of the Kawartal region may cover hundreds of sq. kms. The floods leave behind deposits of sand, slit and clay in layers of varying thickness. In years of average rainfall, Kawartal gets connected with Burhi Gandak (a tributary of River Ganga) and with nearby Nagri Jheel and Bikrampur chaurs, unite to form a lake of about 7400 ha. By late summer however, the water is confined to the deeper depressions and only about 300-400 ha of Kawartal remains flooded and cut off from the adjacent floodplains (chairs). As the water level recedes, over 2800 ha of the exposed mudflats are converted into rice (paddy) fields. In 1951, a drainage channel was excavated to expose additional areas for agricultural purposes, but the channel silted up in few years, and the lake reverted to its former condition. In recent years, further siltation of the overflow channel has resulted in sight fluctuation in water levels throughout the lake. There is a permanent island (Jaimangalgarh) of about 130ha in the Southeast corner of the lake. The Kawar and its adjoining lakes are probably oxbow lakes fed by highly meandering river, the Burhi Gandak that once flowed through these areas. As this lake area remains wet and submerged for a longer period, it has developed specially adopted wetland vegetation and organisms. The emergent, submerged and floating plants present some unique type or representative flora and fauna particularly of this lake and its adjoining areas. Hence, it is a spectacular wetland habitat and perhaps one of the largest freshwater inland wetlands in the country.