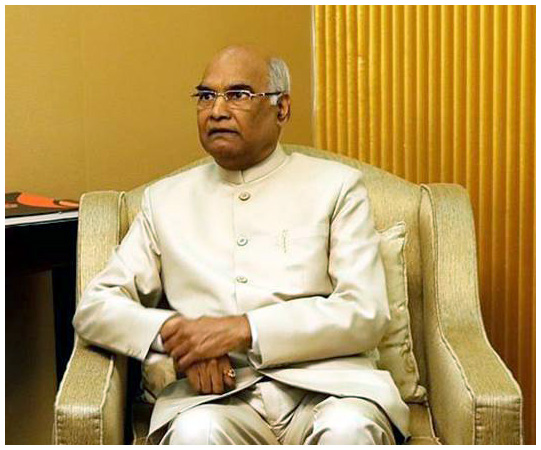 Kovind was born in Paraukh village in the Kanpur Dehat district, Uttar Pradesh. His father Maikulal was a landless Kori (a Dalit weaving community) who ran a small shop to support his family. He was the youngest of five brothers and two sisters. He was born in a mud hut, which eventually collapsed. He was only five when his mother died of burns when their thatched dwelling caught fire. Mr. Kovind later donated the land to the community. After his elementary school education, he had to walk each day to Khanpur village, six kilometres away, to attend junior school, nobody in the village had a bicycle. He holds a Bachelors degree in commerce and a LLB from DAV College, (affiliated with Kanpur University).

After graduating in law from a Kanpur college, Kovind went to Delhi to prepare for the civil services examination. He passed this exam on his third attempt, but he did not join as he was selected for an allied service instead of IAS and thus started practicing law. He was Central Government Advocate in the Delhi High Court from 1977 to 1979 and served as a Central Government standing counsel in the Supreme Court from 1980 to 1993. In 1978, he became an advocate-on-record of the Supreme Court of India. He practiced in the Delhi High Court and Supreme Court for about 16 years until 1993. He was also enrolled as an advocate in 1971 with the bar council of Delhi. As an advocate he provided free legal aid to weaker sections of society, women and the poor under the Free Legal Aid Society in New Delhi.[7] He also served as the personal assistant of Prime Minister of India Morarji Desai in 1977-1978.

He joined the BJP in 1991. He was President of the BJP Dalit Morcha between 1998 and 2002 and President of the All-India Koli Samaj. He also served as national spokesperson of the party. He donated his ancestral home in Derapur to the RSS. He contested from Ghatampur and Bhognipur (both in Uttar Pradesh) assembly constituencies on the BJP ticket but lost both elections.

He was elected and became a Rajya Sabha MP from the state of Uttar Pradesh in April 1994. He served a total of twelve years, two consecutive terms, until March 2006. As a member of parliament he served on the Parliamentary Committee for Welfare of Scheduled Castes/Tribes, Home Affairs, Petroleum and Natural Gas, Social Justice and Empowerment, Law and Justice. He also served as the chairman of the Rajya Sabha House Committee. During his career as a parliamentarian, under M.P. L.A.D. Scheme, he focused on education in rural areas by helping in construction of school buildings in Uttar Pradesh and Uttrakhand. As a member of parliament, he visited Thailand, Nepal, Pakistan, Singapore, Germany, Switzerland, France, the United Kingdom and the United States on study tours.

He has served on the Board of management of Dr. B.R Ambedkar University, Lucknow and as on the Board of Governors of IIM Calcutta. He has also represented India at the UN and addressed the United Nations General Assembly in October 2002.