Muzaffarnagar is located at northern part of Uttar Pradesh. The district of Muzaffarnagar forms a portion of division Saharanpur, and situated in the DOAB of the Ganges and the Jamuna, between the districts of Meerut on the South and Saharanpur on the North. On the west, the Jamuna separates it from the Panipat

and Thaneswar tahsil of the Karnal district of Haryana; and on the east the river Ganges forms the boundary between this district and the Bijnor tahsil of the district of same name. It is roughly rectangular in shape, lying between north latitude 29º  11' 30'' and 29º 45' 15" and east longitude 77º 3' 45" and 78º 7'. The greatest length of district from east to west is sixty-one miles, and its greatest breadth from north to south thirty-six miles. The average length and breadths are about fifty-three and thirty-one miles, respectively. The total area in 1901 amounted  to 1,963,662 acres, or 1,662 square miles and in 2000 amounted to 4049 square k.m.. The district is well connected by road and railway network. National Higway-58 passes through Muzaffarnagar city. Upper Ganga & Lower Yamuna canal lie in this district. 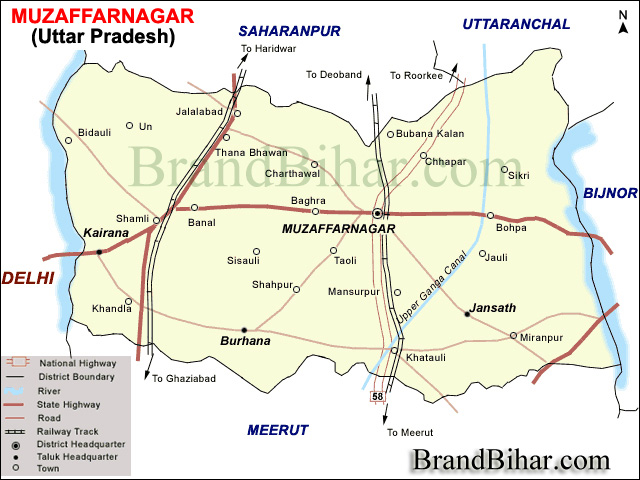 Muzaffarnagar is an important industrial district with sugar, steel and paper being the major products. It has 11 sugar mills such as Tikaula Sugar Mills & Distilleries run by Mr. Nirankar Swarup s/o Shri Somansh Prakash which receive produce from district and the surrounding region; more than 70% of its population is engaged in agriculture. The Muzaffarnagar market of Jaggery (heat-dried sugar-cane juice, called 'Gud' in local language) is the largest in the world. There are a number of steel plants viz. Rana Steels, Barnala Steels, U.P Steels, Sidhbali Steels etc. A very famous resort at Delhi Dehradun highway Grand Cheetal. Some state of the art centers for health, like Dr. Tarique Salim's Max Relief near Almaspur Chauraha.

Culturally, it is part of Western Uttar Pradesh, with Indo-Islamic flavour. The older parts of the city have a Mughal feel, many monuments of Mughal period are spread in the villages and towns of this district. Jansath Tehsil, about 22 km from district headquarters, has many Havelies (grand mansions) of the Sayyids: Sheeshmahal, Killi Darwaja etc. are a few of them.

"Jansath House" is an old palatial bangalow situated at Ansari Road, owned by senior advocate Sh Jamil Ahmad, this bangalow was earlier owned by Sayyid Brothers of Jansath. Maulana Iftikharul Hassan saheb of Kandhla on his visit to city stay at this bangalow and give his sermons here.

Bohoron Ka Mandir, situated on Ansari Road, Muzaffarnagar is a very quiet spiritual place to spend time as very few people visit it. The special thing about this temple is its Ekadash Shivalinga(eleven Shivlingas).

Vahelna, 4 km from the city, is a holy site for Jains. Vahelna is an excellent example of Hindu-Muslim brotherhood as the walls of Mosque, Shiv Mandir and Jain Mandir touch each other.

Government Educational Museum, established in 1959, is famous for several historical metal images, terracotta, coins and stone sculptures. The museum also has varied types of paintings and dolls dressed in traditional costumes, along with stamps and cannons.

Vahelna is an important pilgrimage site for Jains. This site has a mosque, a Shiva temple and a Jain temple sharing a common wall, signifying secularism. The Vahelna Jain Mandir, also known as Shri 1008 Parshwanath Digamber Jain Atishye Chetra, has an old idol of Lord Parshwanath. This temple complex also has a 57 ft high Manasthamb and a Naturopathy Hospital & Research Centre. A newly built 31 ft monolith statue of Lord Parshwanath has been installed in the Jain Mandir. Vahelna is a small industrial village situated 4 km from the Muzaffarnagar City.

Sankirtan Bhawan, also known as the Kirtan Bhawan, enshrines the idol of Lord Tirupati Balaji. The temple is named as Kirtan Bhawan because kirtan is performed every evening in the temple by the devotees. A daily bhandara is organised at the Anna Kshetra of the temple at 12 noon, serving more than 1,00,000 poor people annually. This initiative was started in 1979 by a philanthropist and businessman Giani Ram Gupta and later, the bhawan received heavy donations from other sources as well to continue it.

Zoology Museum, established in 1970, is situated within the campus of the Sanatan Dharam College in Muzaffarnagar. The museum was initiated by the P.G. Department of Zoology of the University. Different invertebrate phyla and vertebrate classes can be seen in this museum. The Insect Gallery is one of the prime attractions of the museum.

Ganeshdham is popular among devotees for the 35 ft high statue of Lord Ganesh. This idol was installed by two residents of Muzaffarnagar, Lala Shukhbir Singh and Lala Lakshmi Chand Singhal. At Ganeshdham, there is River Tripatha flowing on one side and Vat Vraksha on the other. It also has a huge idol of Lord Hanuman at the back side, near the Sukhdeva Teela.

Hanumatdham, situated in the Shukratal town of Muzaffarnagar District, was constructed in 1687. A 72 ft high idol of Hanuman was installed by Shri Sudarshan Singh Chakra and Inder Kumar. The idol was made by Shri Keshav Ram of Shahdol and was inaugurated by Swami Kalyandev Maharaj. In the front of the idol, there is an open courtyard of yagyashala and on the other side, there is katha-manch. Just behind the idol, there are shrines of Lord Rama, Shri Radha Krishna and a hut of Shri Sudarshan Chakra.

Kamla Nehru Vatika is maintained by the local Nagar Palika Authorities. There are many trees in the garden of different kinds of fruits which are sold in an auction every year.

Bhairon ka Mandir is one of the prominent temples in the region which has Ekadash-Shivlinga (eleven Shiva Lingas). The temple and its activities are managed by the Paliwal family of Brahmins.

Akshya Vat Vraksha, also known as Akshya Vat, is more than 5,100 years old and is situated in Shukratal town. This 150 ft high tree is the place where sage Sukdev narrated Shrimad Bhagwat Katha to Raja Parikshit. It is believed that this tree is a symbol of peace, forgiveness and uniqueness.

Swamiji did not need any Honours, titles and prizes. But in 1982 the then President, Government of India Shri Neelam Sanjiva Reddy taking his great works and high social service conformed upon Swamiji Padma Shree. As matter of fact the Honour of Padam Shree hadnot honoured Swamiji but Padam Shree itself had been honoured. In 1993 Swamiji was first to be selected for the Nanda Naitikk Puraskar instituted by Gulzari Lal Nanda foundation after the name of Shri Gulzari Lal Nanda. Although the selfless services rendered by Swamiji are so much that the highest honour of the country if awarded to Swamiji shall equate his services. The great and revered personality of Swamiji hadrein much higher then these honours and prizes. He had done so may kindness and services to the nation and we cannot repay him in any way-Swamiji was in reality was heavenly saint and Epoch creator.

Mahendra Singh Tikait, the BKU Chaudhary ('Headman') was born in 1935 at village Sisauli in Muzaffarnagar of Uttar Pradesh. Ch. Mahendra Singh Tiakait inherited the Chaudharyship of the Khap Baliyan at the age of eight when his father Ch.Chauhal Singh died in 1943.The Chaudharyship of the Baliyan khap had been vesting in his family for the last thirteen centuries. The chaudharyship of a khap panchayat is a hereditary position. The Chaudahry enjoys administrative, adjucative and executive powers over the khap villages. The chaudhary is held in high esteem and his decisions are binding on his people. At a panchayat meeting of the khap Baliyan held at Sisauli on May 12,1941, a resolution was passed which said : " We will work with our body, hear and soul under the leadership of our Chaudhary for the good of our Khap. Towards this end the Chaudhary of a khap has the right even to demand our lives." Thus the Chaudahry of a khap panchayat enjoys supreme powers.

After the death of former Prime Minsiter late Ch.Charan Singh in western U.P. he was called the second 'messiah' of kisans. On 17th October,1986 he formed a non-political orgarnisation named 'Bhartiya Kisan Union' to protect the interests of all the farmers of India whose are 80 percent of the population of the country. In this way he headed so many movements and as a result of these agitations,many times, he was arrested and sent to jail, yet he is on the way to protect the interest of all the kisans of India.

Bhartiya Kisan Union president Ch, Mahender Singh Tikiat died in Muzaffarnagar on 15th May 2011 (Sunday) due to protracted illness from cancer. He was 76. Mr. Tikait also served as the council head of Baliyan Khap.

First Prime minister of Pakistan. 'Kehkashan', a white bungalow with manicured lawns, rows of trees and iron grills located in the Company Bagh area of Muzaffarnagar was once owned by Pakistan's first Prime Minister Liaquat Ali Khan. Mr. Liaquat Ali Khan's (Born and hail from Karnal) connection with Muzaffarnagar dates back to 1926, when he won the election here for the provisional legislative council by a huge margin with no opponent to challenge him.

Shri Verma married Shrimati Rameshwari Devi in June, 1940 and was blessed with one son and two daughters.

He has special interests in Education, Agriculture, Games and sports including Wrestling; Captained Volley-Ball, Hockey and Sports First teams in the College. He takes keen interest in the upliftment of   Farmers, Mazdoor, Backward Classes and Harijans.

Shri Virendra Verma was appointed the Governor of Punjab and Administrator, Union Territory Chandigarh on June 14, 1990. he took over as Governor of Himachal Pradesh on 19th December, 1990. He was a member of the Lok Sabha from 1998 to 1999.

Mr. Javed Ali - Javed Ali is playback singer who has been singing in Hindi movies since 2000. Ali shot to fame in 2007 when he sang the song "Ek Din Teri Raahon Mein" from the movie Naqaab and thereafter another big hit "Jashn-e-Bahaaran" from the movie Jodhaa Akbar (2008). He is currently one of the leading playback singers in Hindi, Bengali, Kannada, Tamil and Telugu. He judged a reality show Sa Re Ga Ma Pa Li'l Champs 2011 on Zee TV. He is recipient of Yash Bahrti Samman from Up Government. He hails from Qwaal Gharana of Shahpur (Muzaffarnagar).

Mr. Anuj Chaudhry - Anuj who hails from Badari village of Muzaffarnagar.He was given the Laxman award (the highest state award in sports) in 2001 and the Arjuna award in 2005.