Before 11 Feb 1995 Mahoba was the Tehsil of District Hamirpur. The then Chief Minister Mr. Mulayam Singh Yadav declered Mahoba as a District on 11 Feb 1995 From then Mahoba has moved forward leaps and bounds on the Social, Cultural and individual front. Mahoba (Hindi: महोबा, Urdu: مہوبا) is a city and Mahoba District of the Indian state of Uttar Pradesh, in the Bundelkhand region. Mahoba is Veer Bhumi of Uttar Pradesh. Mahoba is known for its closeness to Khajuraho, Laundi and other historic places like Kulpahar, Charkhari, Kalinjar, Orchha, and Jhansi. The town is connected with railways and state highways. 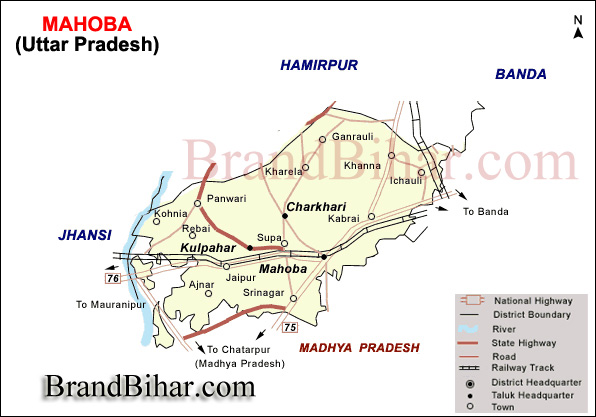 How to Reach Mahoba, Uttar Pradesh

Mahoba is well connected by roadways and railways to rest of the country. Mahoba is a railway junction. National highways NH-76 and NH-86 passes through Mahoba.

Mahoba is also well connected by airports. Nearest airport is Khajuraho Airport - (54.65 km). Satna airport is also only 131 km away.

A rare statue of block granite stone in the dancing pose of Lord Shiva.

A Worship place of Jaina sects.

Scupture of Chamdella's period on the Khajuraho theme situated at Madan Sagar lake like a island where life size statues of eight elephants are standing since ancient times. A place worth visiting

is a scenic beauty having a guest house where accomodation is also available.

This Sun Temple is also has beautiful Sculptures like Sun Temple of Konarka in Orissa.

This is famous for brass works and antiques

This is unique and self styled cultivation called bareja.

A landscapen panoramic range of hills.

A symbol of Bundelkhand riyasat, forts, Places & temples surrounded by many lakes.

has many lakes in surroundings and best suited for water sports.