Kannauj district from geographical point of view its studded in between 27 degree 13 min 30 sec North latitude and from 79 deg 19 min to 80 degree 1 min east longitudes. The district was carved out of the erstwhile Farrukhabad district on September 18, 1997. The district is situated in Kanpur Division its North borders touches Farrukhabad District, at it's east Hardoi District is situated, Kanpur dehat is at its south east border while western and southern borders touches District Mainpuri and Etawah respectively whole district is divided in to three tehsils and eight development blocks. It is almost rectangular shaped district. Ganga is the main river of the district at the North East border of the district, Kali and Ishan rivers are in other parts of the District. Kali rivers at the northern border of the district while Ishan flows in between the District. Average rain fall of the District is approximately 80cm. The climate of the district is characterized by a hot dry summer and a pleasant cold season. 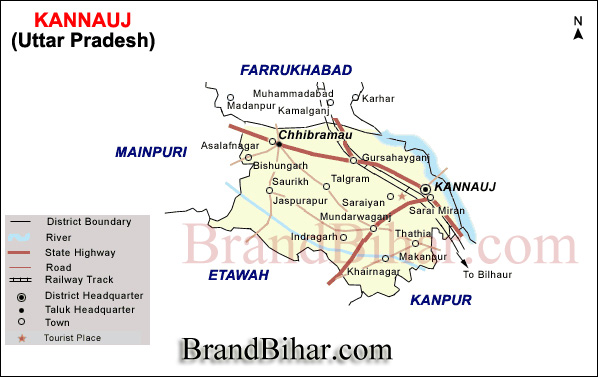 HOW TO REACH Kannauj, Uttar Pradesh

To reach this place two ways of transport is available from Kanpur & Delhi. Train and Roadways Buses are available regularly. From Kanpur it  80 km away.

Kannauj, on the main broad gauge route between Kanpur and Mathura, is connected to all parts of the country by Express/Passenger trains. Some important trains that pass through Kannauj Junction are

Archaeological museum of Kannauj have vast variety of clayey idols which proves that at ancient time Kannauj was famous for art and culture like Mathura, Kashi and Kaushambi. Right from Maurya age it was a fully developed locality. The clay models found here shows that it was a very progressive district of ancient time, even Historical Chinese visitor Hwenswang praised this district during his visit to India.

As per types of these antiquity idols we can categorized them into following categories.

Lakh Bahosi Sanctuary is located near Lakhbasohi village in Kannauj District of Uttar Pradesh established in 1989 and longitude/latitude is 26�54'47.50"N 79�39'19.20"E. It is one of India's larger bird sanctuaries, covering 80 sq .km including a large lake, and also a stretch of the Upper Ganga canal. Lakhbahosi is off the road going towards Tirwa (NH91). Tirwa is a town 15 km away from Kannauj. The nature has gifted Kannauj by a beautiful lakh Bahosi Bird sanctuary. In this sanctuary Bird watching can be done from month of November to March. In month of December, January and February it shows its maximum potential. Jackal, blue bull, mongoose, fishing cat and monkeys are the other animals spotted here. Because during this season one can see maximum type of Birds over here at the Bahosi lake of 3 sq.km.area. As per survey a total of 97 Bird families are available in India while Birds related with 49 families has been seen at lakh Bhosi bird sanctuary.