The district of Jaunpur is situated in the North-West part of Varanasi Division. Its land area extends from 24.240N to 26.120N latitude and between 82.70E and 83.50E longitudes. Its attitude varies from 261 ft to 290 ft. above M.S.L. (Mean Sea Level). The topography of the district is mainly a flat plain with shallow river-balleys. Gomti and Sai are its main parental rivers. Besides these, Varuna, Basuhi, Pili. Mamur and Gangi are the smaller rivers here. The rivers Gomti and Basuhi divide the district into nearly four equal landmasses. The soils are mainly sandy, loamy and clayey. Jaunpur district is often affected by the disaster of floods.

There is a paucity of minerals. Excavations at some places yield to some rocks which are burnt to make lime. The lime obtained from sand and gravel is used in buildings construction work.

The temperatures of the district of Jaunpur lie between a minimum of 4.30C and a maximum of 44.60C. Average annual rainfall is 987 mm.

The geographical area of the district is 4038 sq.km. The economic development of the district is mainly dependent on agriculture. The chief cause of this is the absence of heavy industry in the district. Several industries are coming up along the Varanasi Jaunpur highway. A cotton mill is operational near Karanja Kala. At Satahariya too, about 85 industrial units like M/s Raja Flour Mill, Pepsico India Holdings, Howkins Cookers Limited, Amit Oil & Vegetablle, Chaudharana Steel Limit, Saurya Aluminium are running.

The Animal Husbandry, a dairy unit is established. Three fourths of the population of the district of Jaunpur is dependent on agriculture. 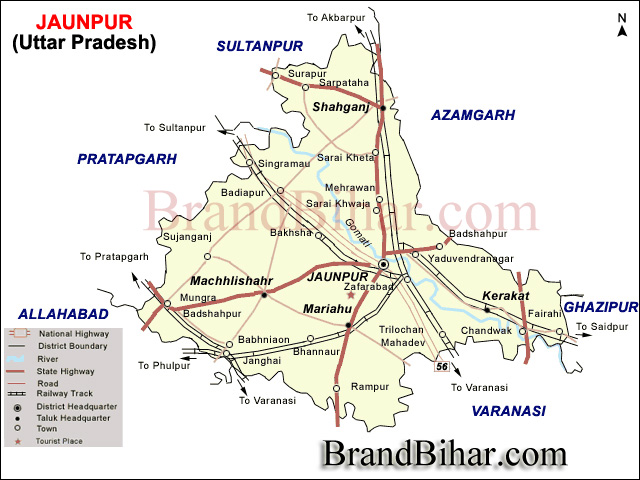 From the administrative point of view, this district has been divided into 6 tehsils (viz. Sadar, Madiyahun, Machhalishahar, Kerakat, Shahganj and Badlapur) in order to maintain law and order and speedily implement the developmental works.

There are many historical sites and worth-seeing sights in the district, amongst which buildings of the Sharki period; Shahi Bridge built by Akbar; and Sheetla Chaukia Dham are the chief attractions of tourists. All the historic & worth-seeing spots have their own special importance. The main ones among these are:

Situated in the heart of the city on the left bank of the Gomti, Shahi Qila was built by Freoze Shah in 1362 A.D. The inner gate of this fort is 26.5 ft. high and 16 ft. wide. The central gate is 36 ft. high. A top this there is a huge dome. At present only its eastern gate and, within, some arches etc. remain which narrate the tale of its ancient splendor. Muneer Khan had got its majestic front gate built with a view to security and it was decorated with blue and yellow stones. Inside, there is a bath in the Turkish style ad a Mosque too. From this fort, an enchanting view of the Gomti river and the city can be seen. The mosque, built by Ibrahim Banbank, carries the imprints of Hindu and Buddhist architectural styles.

Om 1408 A.D., Ibrahim Shah Sharki built the Atala Masjid which came to be considered as the ideal for the construction of the other mosques of Jaunpur. In this mosque, beautiful galleries were built by surrounding it with artistic walls. Its height is more than 100 ft. There are three huge gateways for entrance. The total perimeter of the mosque is 248 ft. Its construction was begun by Feorze Shah in 1393 A.D.

This mosque is in the Sipah locality of Jaunpur on the northern bank of the Gomti. This was built by Ibrahim Sharki at the time of the construction of Atala and Khalis mosques as this locality was settled-in by Ibrahim Sharki himself. The army used to keep its elephants, camels, horses and mules here. It was the place of saints and pandits. Within this mosque there are extremely beautiful "jhanjhariyas" of archdes. Sikandar Lodhi had got this mosque demolished but, looking at the still remaining central arch and compared to the Atala Masjid and the Jama Masjid with their great length and breadth, this mosque appears to be extremely beautiful. It has been dealt great damage by floods. This arch is 35 ft. high and 32 ft. wide. Despite being relatively small, this mosque is extremely beautiful. After the demolition by Sikandar Lodhi, quite a lot of stones from here have been used in the Shahi bridge. This mosque is a very beautiful example of early architecture.

This mosque has been built by V.V.Raje, wife of Sultan Mahamud Shah Sharki in 1455 A.D. at Begumganj, a mile north of the city. Its outer area is 212 x 188 sq.ft. It has three gateways and a courtyard. On two of its pillars some inscriptions in Sanskrit and Pali are there which do not shed much light except for the samvat year and the names of some kings of Kannauj.

With a height of more than 200 ft. this mosque near Purani Bazar on the Shahganj road is an important monument of the Sharki period. Its foundation has been laid at the time of Ibrahim Shah's rule and its construction was completed in various phases. It was finished during the reign of Hussain Shah. This mosque is quite extensive, artistic and attractive and there are 27 steps to the top. Its southern gateway is 20 ft. above ground level. Its inner premises extend to 219 x 217 feet and has a gateway at each of the 4 cardinal points. The eastern gateway was destroyed by Sikander Lodhi. The outer boundary of the mosque is 320 ft. on the East-West and 307 ft. on the North-south side. The decorations, its engravings in the Egyptian style, the curves of its arches, the uniqueness of the Lotus, sunflower and rose motifs, its screens etc. are worth seeing.

This famous bridge of Jaunpur was built by Munyeen Khankhana in 1564 on the orders of Akbar during his reign. This is a one of its kind bridge in India and its carriageway is at ground level. The width of the bridge is 26 ft. with 2 ft. 3 inch wide kerfs on both sides. At each junction of adjacent spouse, pillboxes have been constructed. Earlier shops used to be set up in these pillboxes (gumtees). On a square platform in the middle of the bridge, there is a large sculpture of a lion with an elephant underneath its forepaws. It had formerly been installed in some Buddhist monastery from where it was brought and installed at the bridge. There is a mosque in front of this and there are 10 spans of the bridge to its north and 5 spans to the south which rest on octagonal pylons. It is spot worth seeing.

This ancient mosque was constructed during the reign of Hussain Shah Sharki. There is a surfeit of simplicity in it. There are no arches in this mosque. Earlier there was a rock inscription here with has been destroyed now.

Two moles west of Kheta Sarai is the well-known Gujartal in which pisciculture is being done these days. The ambience of the lake is scenic and close-to-nature. The Van Vihar situated on the T.D.College Kuddupur Road also attracts the tourists.

The temple of Ma Sheetla Chaukiya Devi is quite old. The worship of Shiv and Shakti has been going on since times immemorial. History states that, during the era of Hindu kings, the governance of Jaunpur was in the hands of Ahir rulers. Heerchand Yadav is considered the first Aheer ruler of Jaunpur. The descendants of this clan used to surname 'Ahir'. These people built forts at Chandvak and Gopalpur. It is believed that the temple of Chaukiya Devi was built in the glory of their clan-deity either by the Yadavs or the Bhars- but in view of the predilections of the Bhars, it seems more logical to conclude that this temple was built by the Bhars. The Bhars were non-Aryans. The worship of Shiv and Shakti was prevalent in the non-Armyans. The Bhars held power in Jaunpur. At first, the Devi must have been installed on a praised platform or 'chaukiya' and probably because of this she was referred to as Chaukia Devi. Devu Sheetla is the representative blissful aspect of the Divine Mother: hence she was called Sheetla. On Mondays and Fridays, worshippers come here in quite large numbers. Huge crowds gather here during the Navratris.