Gorakhpu is Situated on the basin of rivers Rapti and Rohini. The geographical shape of the Gorakhpur City is of bowl. The west of the city is guarded by cool Rapti river while the east is associated with excel Sal Forest, giving the divine sense of peace with cool breeze every moment. The south is showered with the power of excellence, in shape of greenish Ramgarh Tal and north is the plinth of city's advancement.

The present district of Gorakhpur, 265 Kms east of capital Lucknow, on National Highway -28 lies between Latitude 26° 46´ N and Longitude 83° 22´ E, covers the geographical area of 3483.8 Sq. km. It is bounded by districts Mahrajganj in the north, Ambedkar Nagar, Azamgarh and Mau in the south, Kushinagar and Deoria in the east and Sant Kabirnagar in the west. Gorakhpur is an important centre of Eastern U.P. It is the headquarter of North-Eastern Railway. Air Force Station, and the main terminus for Kushinagar, Kapilvastu and Nepal.

Distance from main Cities (In Km.) 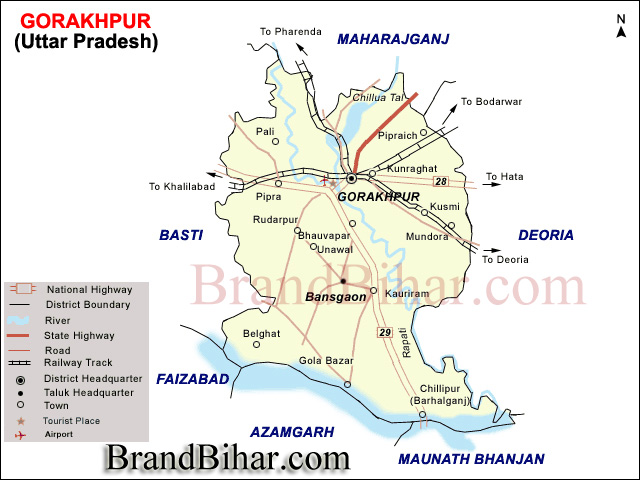 How to Reach Gorakhpur, Uttar Pradesh

Rail : Gorakhpur is well connected with all major cities of India. It has computer- reservation facility. Details of Important trains connecting Gorakhpur is given below :

Roadways : Frequent road-transport is available for all major cities of U.P. The main Bus-stand is near railway station . Buses are available since early in the morning (3.00 Am) till late night, from Gorakhpur to Sanauli. Also, frequent service is available for other routes like Varanasi, Lucknow, Kanpur, Delhi etc. Link service for taking the Sharjah plane is also available, twice a week i.e. Sunday and Wednesday at 6.00 am.

Air : Air Force Station is 8 Km. from the railway station. On 8th March, 2003 it has been inaugurated as a commercial airport. Daily flights are available from Gorakhpur to Delhi and and Calcutta via Lucknow. The timings of the flight available at present are :

Another airstrip of U.P. Civil Aviation is also available in Kasia, 55 km. from Gorakhpur in Kushinagar district. Nearest other commercial Airports are Lucknow and Varanasi.

Terracotta Town Situated at a distance of 9 to 17 km from Gorakhpur city, there are many villages, which are famous for terracotta products.

One of the main features of Gorakhpur's culture is a tradition of folk-songs and folk-dances. Folk-songs are also performed at various festivals during the year. Thekaharwa is sung at Deepawali, the Alha and the kajari during the rainy and winter nights, and the Phaag during Holi.One of the biggest part of Gorakhpur’s culture is the tradition of folk-songs and folk-dances. This is a very artistic vivid part of Gorakhpur’s culture. After a long day of work they unwind with singing and dancing. They have different dances and songs for special occasions also. Folk-songs are performed at different festivals and seasons during the year. They sing the kaharwa at Deepawali, the Alha, Kajri,k Barahmasi during the rainy and winter nights, and the Phaag during Holi. The people of Gorakhpur use the harmonium, dholak, manjira, mridung, nagara, thali, and nagara as musical instruments when they perform. Some of the most popular folk-dances is saved for the special occasion of festivals, fairs, and marriages to celebrate. Gorakhpur’s heritage of songs and dances is an important part of their culture.

Traditional cuisine includes platters of Galawati and Kakori kababs in Oudh and fish. Wheat, rice, gram, maize, and pulses along with curd, milk, vegetables, ghee and vegetable oils, constitute the items of daily food, rice being the staple food of the people.

4 Km. from Gorakhpur Jn. Rly. Station on Nepal Road. It is one of the most prominent and magnificent temples of this area. A one month-long "Makar Sankranti Mela" is organised here every year commencing on 14th January. Several lakhs of pilgrims and tourists visit the temple during the Mela.

3 Km. from Rly. Station on Medical College Road, it has a full-size status of Lord Vishnu made of Kasauti (Black) stone. It belongs to Pal dynasty of 12th Century A.D. This status was taken to Great Britain by the British rulers. But the Queen of Majhauli Raj fought a case in Privy Council of U.K. and regained the same. The traditional 'Ram Lila' is organised here every year on the occasion of 'Dusshera'.

4 km. from Rly. Station, it is situated at Reti Chowk. All 18 parts of "SHREE MADBHAGWAT GITA" is written on the marble-walls. Other wall-hangings and painting reveal the events of life of Lord Rama & Krishna. All sorts of hindu religious books and handloom-textiles are sold here on subsidised rates.

9 km. from Rly. Station, it is situated on NH-28, just ahead of Air Force station. A suitable place for picnic.

3 km. from Rly. Station, it is situated on Pipraich road. There are enchanting statues of Radha-Krishna.

3 km. from Rly. Station, it is huge lake of 1700 acres. It is a good tourist place having a Water Sports Complex, Buddha Museum, Planetarium, Tourist Bungalow, Champa Vihar Park and Circuit House.

Gorakhpur is proud of having a galaxy of   personalities who brought in national and international  accolate and glory to the district through their best services in different walks of life. Even today, they are immortalized with institutions named after them.

Raghvendra Rao (original name),  born   in  pune, a  staunch  patriot and  an  eminent social worker is popularly known as the  Gandhi of Poorvanchal. He aroused cultural and national feelings, spread out education, served the poorest / lepers and sacrificed his life for the socio- economic betterment of the people of Purvanchal.  In recognition to his service the medical college is named after him. Also for the shelter of lepers, Kushth Sewa Ashram was set   up by him, 1951 at Gorakhpur. The noble saint and philosopher left for his heavenly abode on 15th January, 1958.

Born  in  Shajahanpur, Ramprasad  Bismil   was a  great  revolutionary  and believed in armed struggle against   the  British  ruler.  As the main accused in the famous Kakori Conspiracy Case (1925) he was hanged  to  death  in  Gorakhpur District Jail on 19th Dec.1927. He wrote his autobiography in jail, his last words being " I wish the downfall of the British Empire". His martyrdom at prime age inspired the people of Gorakhpur particularly  and the nation to advance the freedom struggle to its logical end.

The  first  great  freedom  fighter   of Gorakhpur,  waged  Guerilla War  with  the Britishers, was at last arrested  through  an   informer  and  hanged  at Alinagar Chowk, Gorakhpur  on 12th Aug.  1857. His supreme  sacrifice  remained  a  perpetual   source of  inspiration  for the  people of Gorakhpur till the attainment of freedom.

Original name Ganpat Rai, World famous  Hindi Writer, was born in Varanasi but Gorakhpur was his work-place.  As  a writer  he got  recognition from Gorakhpur  during his stay as an Asst. teacher and Hostel Superintendent (1916-1921).

Hanuman  Prasad  Poddar,  lovingly called as   Bhaijee, a multifacent  personality, an editor of famous religious magazine 'Kalyan' is remembered for his untiring efforts to propogate and disseminate Hindu religion across the world.

One  of  the  famous  founder  of   the  Hindu  Maha  Sabha, a  great  nationalist  and follower of yogi Gorakhnath, was closely associated with the famous Gorakhnath temple and established a number of educational institutions in the city. His  contribution   to the  establishment  of  Gorakhpur  University is significant.

Pt. Surti Narayan Mani Tripathi was the  First ICS of UP State. He has held  many important posts including the post of District Magistrate - Gorakhpur.  That was the time when Pt. S.N.M. Tripathi took a vow to build an University in Gorakhpur. He was the Founder President of the Gorakhpur University. Other personalities like Mahant Digvijaynath, Shri Hanuman Prasad Poddar, Sardar Majithia were also members of the foundation team.

An editor of  'Swadesh' is known for his patriotic writings-editing.

Vir  Bahadur Singh,  real  son  of  the  soil, ex. Chief  Minister  of U.P. and  Central  Cabinet Minister   of Communication,  is  widely   remembered  as  the architect  of  modern  Gorakhpur. Gorakhpur   is indebted to  him for  ushering a  series of  developmental   activities, the prominent being upgradation of the  city Gorakhpur to B class  and  Nagar Nigam, creation of  Gorakhpur Development Authority,   construction   of  residential  colonies,  openeing  of   Sports College,  Mahila  I.T.I. and  Navodaya Vidhyalaya, ambitous Ramgarh Project, Entertainment and Amusement Parks and widening of Roads.

An Industrialist, founder of Sardar Nagar Sugar Mill and others. Sports loving and known for his charitable works.

An Illiterate activist who reformed the people of many villages and is popular for her Social Activities. Resident of  a Village of Pipraich Block, District Magistrate of Gorakhpur felicitated her alongwith other officials and public personalities.

An ace badminton  player of  Gorakhpur, eight times national champion(1980-87), recipient of Arjuna Award,  winner of  Gold   Medal  in Common Wealth Games(1982),  bronze medalist of Asian games (1982),  took  participation  in several  international   tournaments.  He  was  known as the great stroke player  both   on forehand and  backhand. Unfortunately, his promising life was cut short by the cruel assasin's bullet on 28th June. 1988.

Narendra Hirwani, born and brought up in Gorakhpur but played Ranji for M.P. State, is the youngest cricket  test  player and  became  crickecters of the year (1988).  National  record  of taking maximum number of  wickets (16 for 136) in test match( against west Indies at Madras) goes to his credit.