The boundaries of district touch Etah district in north and Mainpuri and Etawah in east. The Yamuna river makes its southern boundary. The area of district is about 0.8% of total area of U.P. and population is 1.1% of total population of U.P. Aproximately 73.6% population is living in rural area. It has severe winter and summer seasons. Mostly district is plane and its slope is from north west to south.

The city is 40 east from Agra on National Highway 2 which makes it an important stopover for the transport vehicles on this highway. Firozabad hence is connected to several bus services to the Western and Eastern parts of Uttar Pradesh state. Due to proximity to Agra and hence the borders of Uttar Pradesh with Rajasthan, Madhya Pradesh states several inter-state bus services also serve the city.Intra-city transport typically consists of Rickshaws, 3-wheelers and ac, non-ac city buses. 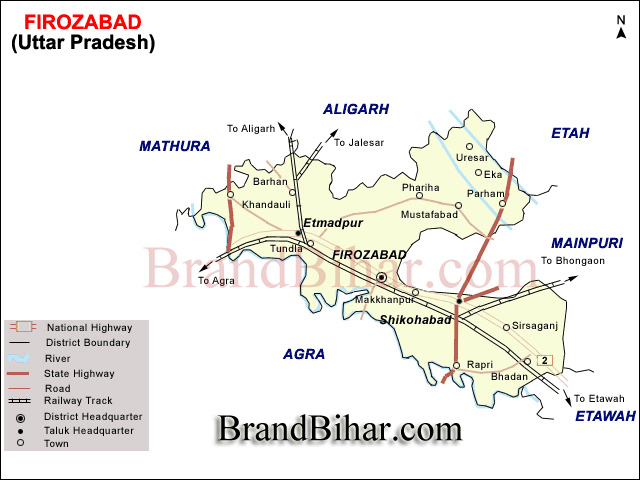 There are many Jain temples in Firozabad including the well-known Chadamilal Jain temple, Shri Shuparshnath Jain Mandir in Gher Khokal (Mahaveer Chowk) and Chandprabhu Jain Mandir in Khidki. The two temples of Gherkhokal and Khidki are approximately 250–300 years old. The old name of Chandwar was taken from the idol of Chandprabhu made at the time of Prithviraj Chauhan. Muhammad of Ghor attacked a holy Jain location situated 6 kilometres (3.7 mi) from Firozabad 19 times. An annual fair was held in Chandwar on October 2 . The Jama Masjid, founded by the 16th century Mughal Emperor Akbar is the oldest mosque.