Faizabad (Hindi: फ़ैज़ाबाद, Urdu: فیض آباد‎, Old British Colonial: Fyzabad), the old capital of Awadh, is the headquarters of Faizabad District and Faizabad division as well. Its a joint municipal board with Ayodhya in the state of Uttar Pradesh, India, situated on the banks of river Ghaghra (locally known as Saryu). It was the first capital of the Nawabs of Awadh and has monuments built by the Nawabs, like the Tomb of Bahu Begum, Gulab Bari etc. The Legend of Awadh, Umrao Jaan 'Ada', was born in Faizabad (her childhood name was Ameeran). Another legend and Hindi writer Radhika Prasad Tripathi was from this city. Akhtaribai Faizabadi, also known as Begum Akhtar, was born in Faizabad. She was a classical singer who performed Urdu ghazals, dadras, thumris, etc. Among other notable people from Faizabad are Mir Babar Ali Anis, a nineteenth-century writer of Marsiya (elegies in Urdu) and Brij Narayan Chakbast, another nineteenth-century Urdu poet. Chakbast is credited to have translated the Ramayana into Urdu for the first time.

Climate -The Climate of the district may be treated as normal. The effect of rains, winter and summer are not very harsh. So a pleasant whether remains throughout the year. Usually the summer expands from april to July, the rainy season from August to September and the winter from October to March. 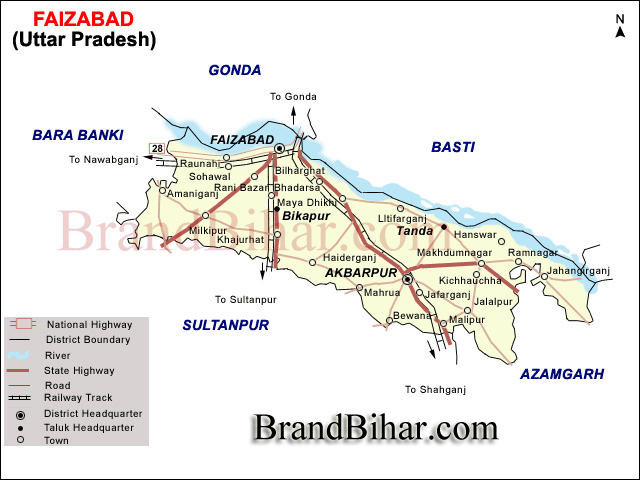 Cultural heritage of district originates in the past from the kingdom of Suryavanshis. In the lineage of Suryavanshi Kshatriyas, King Raghu was a glittering character after whom the Suryavansh became popular as Raghuvansh. In the third generation of king Raghu birth of Shri Rama took place, whose image is still alive in the heart of all Hindus as God. The period of the Ramayana was, perhaps the most glorious period in the history of ancient India. For not only did this age mark the composition of the holiest scriptures, the Vedas, and other sacred literature that laid the foundation of Indian culture and civilization, but the era was also exemplary in its rule of law and truthfulness. The regent was answerable to his subjects in matters involving the prestige of the state and society. The veracity of the facts lies in the undiminished reverence for the epic even after more than three millennia. Lord Ram was the 'Adarsh Purush' of the Ramayana - an ideal in every fact of human behavior. His fourteen year of exile impressed the human mind more vitally than other period of his life. Because he had roved the wilderness, giving up his just heritage, merely to preserve the honor of his father's word.