Deoria district is located between 26 ° 6' north and 27° 8' to 83° 29' east and 84° 26' east longitude out of which district Kushinagar was created in 1994 by taking north & east portion of Deoria district . District deoria is surrounded by district kushinagar in North, district Gopalganj & Siwan(Bihar state) in East , district Mau & district Ballia in south and district Gorakhpur in West . Deoria district headquarter is situated at 53 km. milestone from Gorakhpur by road towards east . Ghaghara , Rapti & Chhoti Gandak are the main rivers in this district . Deoria District came into existence at March 16' 1946 from Gorakhpur district . The name DEORIA is derived from 'Devaranya' or probably 'Devpuria' as believed . According to official gazzettes , the district name 'deoria' is taken by its headquarter name 'Deoria' and the term ' DEORIA' generally means a place where there are temples . The name ' DEORIA' originated by a fossil( broken) Shiva Temple by the side of 'kurna river' in its northside.

. Ghaghara, Rapti & Chhoti Gandak are the main rivers in Deoria district. Besides these, Gorra , Bathua , Kurna ,Majhne ,Nakta are small river/nala which originate from above mentioned rivers. Climate of the district is 'SAMSITOSN' .May & June are hot and December & January months of the year are cold. Soil of different types is found in the district. Domat , Bhat , Matiyar & Balui Domat is found commonly. Productive & densely populated this district of Uttar Pradesh is situated at the north-east end of the state. Currently,Deoria district has five tehsils namely Deoria sadar , Salempur , Rudrapur , Berhaj & Bhatparrani. 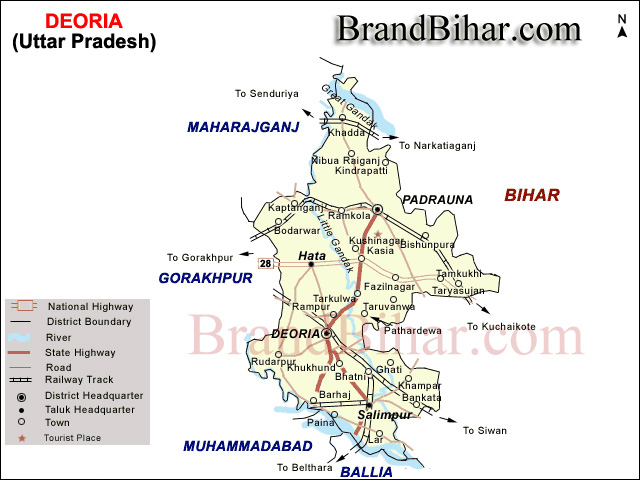 Vernaculars spoken in Deoria include Bhojpuri, a language in the Bengali group with almost 40 000 000 speakers, written in both the Devanagari and Kaithi scripts

SHAHID SMARAK - RAMLILA MAIDAN , DEORIA - RAMLILALA MAIDAN of Deoria is one of the freedom-fight places where a student of class 8th of Basantpur- dhoosi ,RamChandra Vidrarthi, was shot dead on Aug'14' 1942 during freedom- fight struggle.

HANUMAN MANDIR ,DEORIA-- Hanuman Mandir is located at RaghavNagar,Deoria & is one of the 'siddh' places of Deoria.A large no. of followers can be seen on each Tuesday.

DUGDHESWARNATH MANDIR, RUDRAPUR-- Dugdheswar Mandir is on the main pilgrim's of the north-east.It is one of the old historical 'Shiv ' temples situated at approx. 2 km. north of Rudrapur town.

DIRGHESWAR MANDIR,MAJOULIRAJ -- An old historical 'Shiv Mandir' situated at Majouliraj town is called to be worship place of 'Guru Dronacharya' of Mahabharat.