As per provisional data of the 2011 census, Budaun had a population of 369,221, out of which males were 183,475 and females were 175,746. The literacy rate was 83.0%. Budaun City has 51% Hindus concentrated mainly in the Civil Lines area, New City and outer areas, whereas 46% of the total population are Muslims found mainly in Old City and Nai Basti areas. Remaining are Sikhs and Christians. 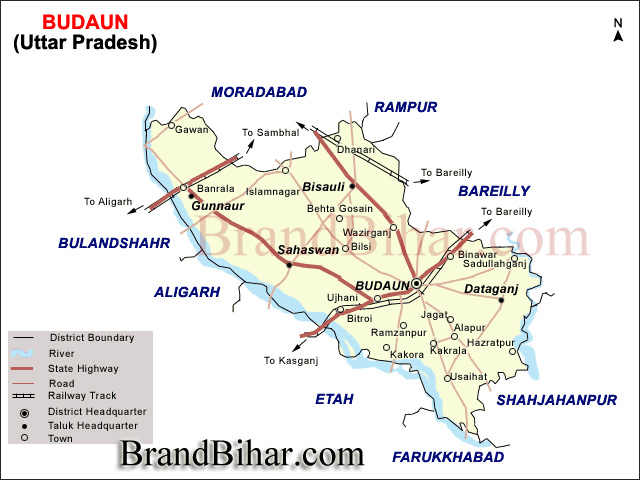 Roadways -
Budaun city acts as a junction for many national roads, which make the city one of the most important of the western UP. SH33 (Bharatpur-Mathura-Bareilly) and SH43 (Moradabad-Farrukhabad) pass through Budaun, It is also the terminal point of SH18 (to Meerut) and SH51 (to Delhi). Budaun Depot, with 110 buses is one of the most profitable depots of UPSRTC. Two new highways would be soon connected to Budaun city, first will connect Budaun to Etawah through Qadar Chowk, Etah and Mainpuri and the second one would connect Budaun to Shahjahanpur through Dataganj. After construction of these two roads in coming 2 years, Budaun will be an important road junction of the Western UP.
Roadways buses are available 24x7 from BADAUN to DELHI & vice-versa.

Railways -
Budaun lies on the Mathura-Lalkuan railway line which is meter gauge yet till Kasganj. The work is under process to make it Broad gauge since 1996, but it is now going to complete till Dec 2013, another rail line is proposed connecting Gajraula to Mainpuri through Budaun City, which would make Budaun a junction.

InterCity -
Classical rickshaws serve the city for all the day. However, you may find autos on specified points run to a limited distance (10–20 km generally). Main routes for auto rikshas and light vehicle are towards Dataganz, Aonla and Ujhani. Budaun is one of the less polluted cities of UP because of a lot use of AutoGas (LPG). In fact Budaun is one of the rare cities having AutoGas on petrol pumps. Many the vehicles of the city are LPG workable.

Agriculture in Budaun, Uttar Pradesh -
Major agricultural products are wheat, paddy, sugarcane, guava and menthol. Budaun is the largest producer of wheat in UP, II largest of sugarcane and potatoes. It is the leading producer of menthol in the country. The soil is very fertile due to tarai, because Badaun is on the bank of the Ganges; the Ganges flows 110 km in the district. In the account of agriculture, guava and menthol are the major exporting products. Budaun gives 40% of total mentol export of India.