Amroha district consists of 1133 villages, 3 Tehsils, 6 Blocks & 11 Police Stations. Its geographical area is 2470 Sq. Km. Extending from Latitute 28' 54'' North to 39' 6'' North and Longitude 78' 28'' East to 78' 39''East. The maximum & minimum height from sea level are 240ft. & 177ft. respectively. In the north of the district lies district Bijnore,District Sambhal is in the south, tehsil Sadar of Moradabad is in the east and in the west are situated districts Hapur, Ghaziabad & Buland Shahar. Ganga river separates it from district Hapur,Ghaziabad & Buland Shahar.

The majority of the population of the district depends on agriculture besides the cottage industru like manufacturing of DHOLAK & KATHOLI, Handloom works are also taken up in Amroha, BEEDI in Naugaon Sadat & Cloth weaving is now taken up in Bachraun. Milk & dairy products are attracting the attention of the peoples in villages and they are being associated with it by Cooperative Societies.

The climate of the district is similar to other districts of the state situated at the base of Himalaya which becomes hot in summer and dry & cold in winter. Ganga, Baha & Krishna are the main rivers of the district. 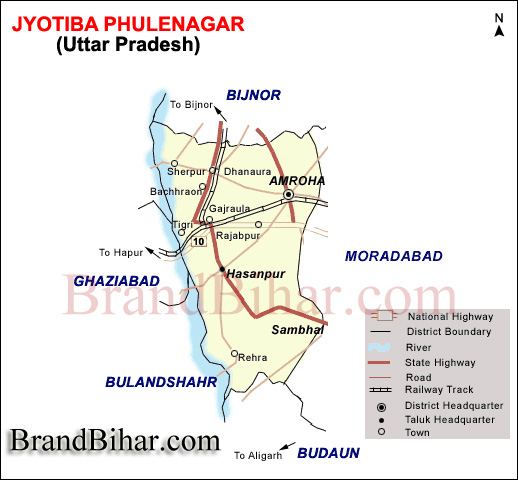 - It is situated on National Highway no. 24 and 53 Km. away from Moradabad & 100 Km. From Delhi. It has been developed as an important Industrial city. Many large & medium scale industries like Vam Organics, Chaddha Rubber, Shivalik Cellolose of Hindustan Lever etc are situated here.

- It is located on the bank of Ganga at about 62 Km. from Moradabad . Every year on Kartik Poornima, a famous Ganga Mela is held here and lakhs of devotees use to take holy dip.