Agra, located on the Indo-Gangetic plain has a continental sub-tropical climate, with long, hot summers from April to September when temperatures can reach as high as 45°C (113°F). During summers dry winds (loo) blow in this region. The monsoon months from July to September see about 67 cm (27 inches) of rainfall annually.
Area: 120.57 sq. km
Altitude: 169 metres above sea level
Location: Uttar Pradesh, India
Languages: Hindi and Urdu 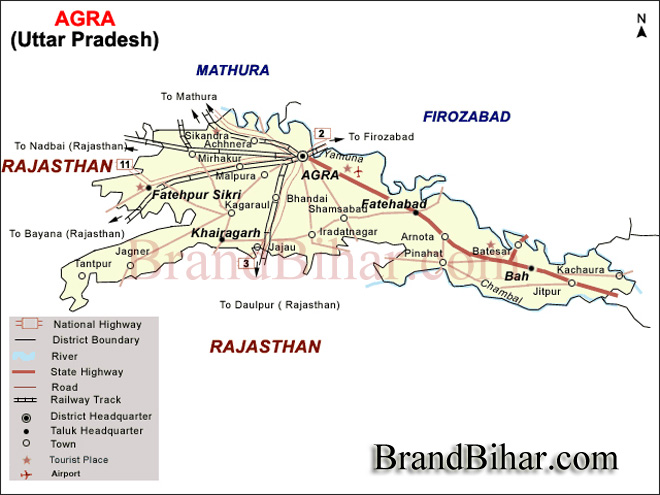 How to reach Agra (Transport System in Agra)

Agra Airport is about 12.5 km from city center

1. Agra Cantt. Railway StationAgra Cantt (Station Code: AGC) is the main railway station and lies southwest of the Taj and Agra Fort, both of which are a short ride from the station by car, auto-rickshaw, or cycle rickshaw.

2. Agra Fort Railway Station (Station Code: AF) near Agra Fort, is infrequently serviced by the interstate express trains, it is one of the oldest railway station in the country. The station serves trains to the east (Kanpur, Gorakhpur, Kolkata, Guwahati) and central India Ratlam, Nagda, Kota (Haldighati Express). Some of these trains also stop at Agra Cantt.

The Lluxury Trains – the Palace on Wheels, and the Royal Rajasthan On Wheels also stop at Agra on their eight day round trip of tourist destinations in Rajasthan and Agra. The Buddhist Special Train also visits Agra.

Idgah Bus Stand, Taj Depot, Ford depot and Inter State Bus Terminal (ISBT) are the major Bus Stands in Agra and is connected to most of the bigger cities in North India.

From Delhi: NH2, a modern divided highway, connects the 200 km distance from Delhi to Agra. The drive is about 4 hours. The primary access to the highway is along Mathura Road in Delhi but, if coming from South Delhi or Delhi Airport, it is easier to take Aurobindo Marg (Mehrauli Road) and then work up to NH2 via Tughlakabad.

From Jaipur: National Highway 11, a Four lane divided highway, connects Agra with Jaipur via the bird sanctuary town of Bharatpur. The distance of around 255 km can be covered in around 3–4 hours.

From Gwalior A distance of around 120 km, takes around 1.5 hours on the National highway 3, also known as the Agra – Mumbai Highway.

From Lucknow / Kanpur NH2, the divided modern highway, continues on to Kanpur (285 km, 5 hours) and from there to points East ending in Kolkata. From Kanpur, NH25 heads for the city of Lucknow (90 km, 2 hours).

The Mahatma Gandhi(MG) Road which runs through the city connects it from one end to the other. In March 2010, the Uttar Pradesh government, through an open bidding process, chose Jaypee Associates to develop an Inner Ring Road to connect NH2/Yamuna Expressway in the north to NH3 in the south in a 30 month timeframe. In September 2010, Gifford was chosen to design the road.

Other para-transit modes includes auto-rickshaws and rickshaw. While passengers need to negotiate rates for the rickshaws and they are usually expensive, there is a system of (what is called) 'Tempo' which are autorickshaws that run on specific routes called out by drivers. Tempos take around 6 people simultaneously and work out to be most economical and practical.

Polluting vehicles are not allowed near Tāj Mahal, so one needs to take electric autos or Tanga (Tonga) from a few kilometres outside the Tāj Mahal.

Although tourism contributes to a large extent in the economy of Agra, the city has a substantial industrial base. A lot of manufacturing plants and industry related wholesale markets is prominent in Agra. Agra Industries are doing a fine job in various fields. Producers and dealers of Agra deal in different products and has a vast market to support them. The economy of Agra is also dependant on indrustrial production. But, the cities industrial base also produces automobiles, leather goods, handicrafts and stone carving.Agra has a good number of apparel and garment manufacturers and exporters. Some of the leading names in the industry are Kamlesh Exports, Jsn International, India Craft etc.Agra has also developed a thriving export business. Agra has developed an important market for the automobile industry. Anil Diesels, Benara Auto, Harvest Group of Industries and Malloys India are some of the major players of the automobile industry in Agra. The leather industry is among the most traditional and original industries of Agra. Today, Agra's economy is mainly dependant on tourism. This city is home to some of the most prestigious spas, resorts and hotels in all of India. In fact, one of the largest spas in all of Asia is the Kaya Kalp which is located in the Hotel Mughal. Primarily the Economy of the Agra district is agriculture based while the economy base of Agra city is Small Scale Industries, Commerce and Trade. Major crops

(Please click on the name to view the detail information)