Nawada situated in the lap of magadh section of division enjoys its glorious past with historical imminence. Nawada district is situated in the Magadh division. Nawada town is the administrative headquarters of this district. 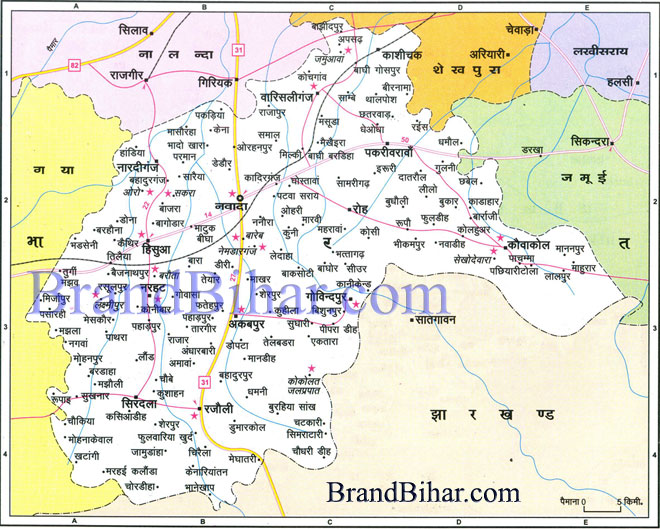 Places of interest in Nawada

Famous "Sarvoday Asharam " is in the district of Nawada. This Asharam inaugurated by Desh Ratana Dr. Rajedra Prasad and nourished by Shree Jai Prakash Narayan has enhanced the glory of Nawada. It is situated one and half miles away from Kawakole Police station at Village Sekhodewra .The site of the asharam is beautiful with the background of hills there are also each hills. If ones stand against the highest of the hillocks and shouts, the voice is echoed book in the same very district and human like tone.

Kakolat waterfall a stunning little hidden wonder of nature, situated on the beautiful Kakolat hill, located on the border of Bihar and Jharkhand, just 33 km from Nawada. This is one of the most visited and renowned Bihar getaway, where tourists come from all over the state and adjoining areas to witness the sheer beauty of Mother Nature cascading marvelously. The Kakolat waterfall of Bihar cascades down from a height of between 150 and 160 feet and forms a natural reservoir at the base of the waterfall. Good fall in bihar
Legends are also associated with the Kakolat waterfall such as, a Treta Yug king was cursed to take the shape of a python and live at the falls here, by a Hindu spiritualist. The place was then visited by the Pandavas during their exile and it was during that time that the python king got rid of the curse, and he proclaimed that any person who bathed in the waterfall would never be reborn as a snake.
Kakolat waterfall has become an increasingly popular tourist attraction in Bihar, where huge crowds can be seen during summers for weekend picnics. This waterfall also boats a wide variety of watersports and fun in the water. Apart from its significance as a tourist destination, the Kakolat waterfall is also widely visited at the time when a big fair is held on an occasion of bishua or chait Sankranti. This is basically a religious event accompanied with a three-day mela, where many devotees take their bath in the waterfall. The Kakolat waterfall has great historical and mythological significance. The waterfall is located near Govindpur police station, about 33 km away from Nawada, on Kakolat Hill. Below the falls there is a deep natural reservoir.
The fall is approximately 160 feet (49 m) in height. The scene is panoramic due to all-round green forest area. Kakolat Fall is a popular tourist spot in Bihar. During the summer, people from all over India come to the falls for picnics.

This temple, 12 km from Nawada town and 6 km southwest of Rajgir, is believed to have existed since the ‘Dwapar Age’.The legend has it that the water in the temple is sacred enough to cure leprosy patients. Sun Temple at Handiya in Nawada in Bihar is popularly known as Surya Narayan Temple Handiya. The temple has numerous ancient murtis and a sacred pond.
It is the believed that the original shrine was constructed by Jarasandha during the Dwapara Yuga. It is said that daughter of Jarasandha was cured of leprosy after taking holy dip in the pond near the Sun Temple.
The murti worshipped in the temple is of Surya on a chariot with seven horses attached to it. There is also a small shivling in the sanctum sanctorum.
The dome of the temple is noted for a Surya Chakra and three kalasha of brass.
The most important day in the temple is Sunday. Thousands of people who are afflicted with leprosy visit the shrine on the day. The take holy dip in the pond and then offer prayers in the temple. They again return to the pond, take bath, and carry holy water to offer to the deity. The devotees are then given special ash known as bhabhoota as Prasad. Devotees rub it on the skin for getting relief from leprosy.
Chaitra (March/ April) and Kartik (October/November) are the two important months when fairs and festivals are held here.
Temple of Ma Bhagwati, in a nearby village, and a Shivalinga on Dhaniya hill, around 2 km from the Sun Temple, are two important shrines nearby.