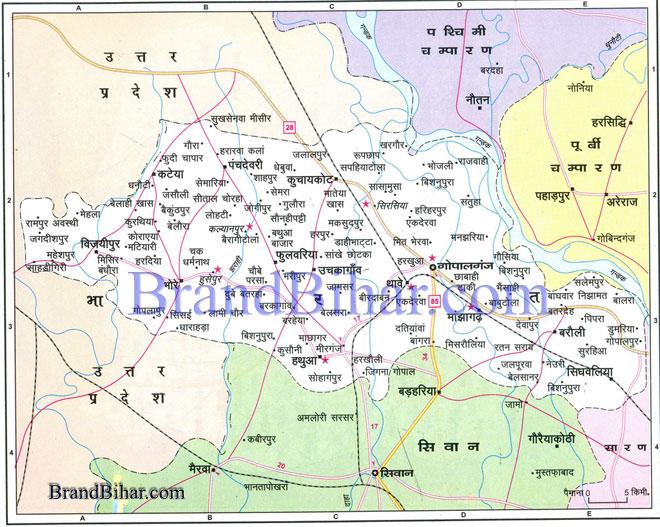 Connected by rail, with a station at Gopalganj(important broad gauge route and a narrow gauge line).

State highways and roads link district headquarters at Gopalganj to all 14 blocks. National highway (No 28) passes through Gopalganj.

Gopalganj is an administrative district in the state of Bihar in India. The district headquarters are located in the town of Gopalganj, and the district is a part of Saran Division.

Gopalganj is an important agricultural center in North Bihar. Being an important district in the region, it has several secondary and tertiary industries based on agriculture, such as cold-storages.

Gopalganj is well suited for Sugarcane production. Languages spoken are Bhojpuri, Hindi, and English. Gopalganj District receives an average rainfall of about 290 mm and the temperature varies from 10 to 45 degree Celsius.

Gopalganj has got pretty diverse climate. It is exceptionally hot and dry during summer with temperature reaching as high as 45 degrees Celsius. Gopalganj receives about 500 mm rainfall during monsoons, which is followed by pleasant temperature in winter.

The district occupies an area of 2033 km² and has a population of 2,149,343 (as of 2001).
Gopalganj Market is mainly known for Sugarcane, Pulses, Agriculture, Grains Trading. Gopalganj Districtis known for its advances in horticulture. Gopalganj is one of the largest sugarcane growing district in India.

Gopalganj is also growing up as a premier educational place with many colleges in the field of computer science. Modern Gopalganj is now boasts of vast industrial area, educational institutes and good hospitals. The city is well developed with good roads, shopping centres, residential areas, with good infrastructure in communication and transport.

Food The staple food of the people is wheat and rice.

Places of interest in Gopalganj

A village in the extreme east of the Gopalganj subdivision, 56 kms north of Chapra and 40 kms southeast of Gopalganj. It is also a railway station of the North-Eastern Railway of the Chapra - Mashrak Section. It is an ancient site and two extraordinary pyramidal-shaped mounds were found here. These two mounds are situated close to the southeast of the village, and east and west of each other. The western mound is situated almost adjoining the southeastern end of the village, and the eastern mound is situated at the distance of 640 feet to the southeast of the other, and close to the road. Each of these mounds is of a pyramidal shape, with four corners at the base projecting considerably outwards, so that a ground plan of one of these mounds would resemble a fore pointed star surmounted centrically by a cone. These mounds appeared to be formed of clay, but mixed with small fragments of brick and pottery. At the distance of 950 feet to the south of the eastern mound, there is a round-shaped mound of moderate height, with a horizontal diameter of about 200 feet from north to south, and about 140 feet from east to west. There is an old well here. Across the road to the north of the village there is a portion of the mound, which appears as if cut off by the road from the large flat mound, on which the village Dighwa Dubauli itself stands. These mounds are said to have been the works of Chero-Chai, i.e., of the Cheros, an aboriginal race who seem to have once been powerful in this part of the country, but who now inhabit the hills to the south of the Ganges.

A village situated 6-kms south of Gopalganj, is a junction station of the Northeastern Railway of the Masrakh -Thawe section and the Siwan- Gorakhpur loop-line. In the village there are remains of an old fort but the history of the fort is obscure. The King of Hathwa had a palace there but it is now in decadent state. Close by the residence of the Hathwa Raja there is an old temple dedicated to Goddess Durga. Within the enclosure of the temple there is a peculiar tree, the botanical family of which has not yet been identified. The tree has grown up like the cross. Various legends are prevalent in connection with the idol and the tree. Food for jackals is still offered in the nearby jungle and a big fair is annually held in the month of Chaitra (March -April).

The village is situated on the western bank of the Jharni River about 24-kms North-West of Gopalganj. Historically this village is of some interest as it was previously the seat of the Maharajas of Hathwa. The fort erected by them exists, but in total ruins, built of bricks with a moat around almost filled up at present. To the east of the fort are fourteen small mounds marking the spot where the wife of Basant Sahi, a member of the family, with her 13 hand-maids immolated herself holding the head of her deceased husband in her lap. Fateh Sahi killed Basant Sahi for helping the East India Company in getting information about the movements of the latter that was his cousin and had been an outlaw. The members of the Hathwa family still perform worship at the mounds, which may be attributed to the late 18th century, though the fort ruins may be of an earlier date.

The village is situated about 24-kms north of Siwan and has apparently derived its name from a Muslim tomb that it contains. The tomb is that of a Mohammedan saint named Shah Arzan who hailed from Patna. It is said he was attracted by the solitude of the place and had performed a chilla or a religious contemplation of 40 days. He also set up a religious establishment, which was endowed by the Emperor Aurangazeb. The anniversary of the saint’s death is celebrated on the 11th of Rabi-us-sani every year, which attracts a large crowd. 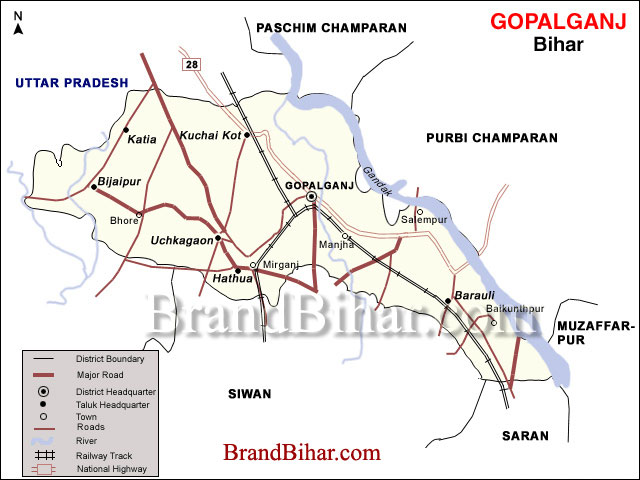